Skip to main content
News
This story appears in the Francis in Latin America feature series. View the full series. 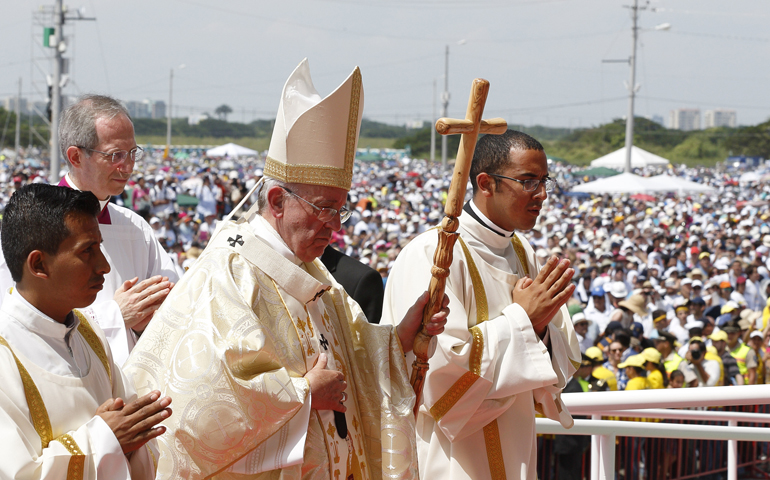 Pope Francis delved into his weeklong, three-country tour through South America on Monday by offering a million-plus crowd in Ecuador a poignant and emotional affirmation of the role of the family, promising that despite economic hardships across the region, things can and will improve.

In a nod to expected Vatican intrigue in coming months, the pope also called on those gathered for an outdoor Mass on a sweltering day in the port town of Guayaquil to "intensify" their prayers for October's global meeting of bishops on family life issues.

With a homily centered on the Gospel story of the wedding feast at Cana -- where Jesus, at Mary's asking, miraculously made wine from water -- the pope asked the crowd to pray that a similar miracle could occur in the bishops' discussions.

The point of the meeting, known as a synod, is "to mature a true spiritual discernment and find concrete solutions to the many difficult and important challenges families must confront in our times," Francis told the crowd in his native Spanish.

"I ask you to intensify your prayer for this intention so that what still seems to be impure to us, to scandalize us, or frighten us, God ... can transform it into a miracle," he then exhorted them. "Families today need this miracle," he added to his prepared text.

Francis' words were striking in their directness and in the pope's decision to address the synod at only his second public encounter during his Sunday-Wednesday visit in Ecuador, part of a longer sojourn that will later see him travel to Bolivia and Paraguay.

The pope's remarks were part of a lengthy discourse during the homily at the Mass, where crowds were nearly overwhelming.

Aerial photographs showed almost every part of Ecuador's approximately 2,000-acre Samanes Park filled with people. Many had camped out all night to secure a place at the park in Guayaquil, some 250 miles southwest of Quito on the Pacific Ocean.

With weather climbing above 90 degrees, firefighters sprayed the crowds with water hoses as they chanted anthems before the pope's arrival.

October's Synod of Bishops will be the second of two global bishops' meetings called by Francis for 2014 and 2015. Discussions around the events have attracted wide attention and some controversy for their focus on issues such as divorce and remarriage.

In a return to the continent of his birth for the first modern pope from the Americas, Francis took the opportunity Monday to speak directly to struggles faced by Ecuadorean families, mixing the Gospel story with miracles that he said people witness every day.

The pope then poignantly called on those present to believe that things can always get better, that the best always lies ahead, while reflecting on how people in the Gospel story express amazement that the couple being married served the best wine (provided by Jesus) last.

"This is the good news," Francis told the crowd. "The best of the wines are yet to be drunk; the nicest, most profound and beautiful things for the family are yet to come."

"The time is coming when we will taste love daily, when our children will rediscover the space we share, and our elderly will be present in everyday joys," he said. "The best of wines will come for every person who risks everything on love."

The best "will come in spite of all the variables and statistics which say the opposite," the pope continued. "The best wine is yet to come for those who see everything crumbling down."

"Mumble it until you believe it," he told the crowd. "The best wine is yet to come, and whisper it to the desperate or unloved. Open your heart for the best of wines that will come."

"God always moves out to the peripheries, to those who have run out of wine, those who drink only of discouragement," Francis said. "Jesus feels weakness to squander his best wine with those that for one reason or another already feel that their jars have been broken."

The pope's words expressing hope for the future will likely carry significance for many in Ecuador, which has experienced an economic boom in recent years because of oil and resource mining but where many families still struggle to find work or provide for their needs.

Many in the country are also debating the best strategy for economic growth, which has focused in recent years on controversial resource mining.

Some Catholics say they hope the pope will address that issue specifically in coming days, especially their government's opening of mining in an internationally recognized nature reserve on the country's eastern border with Peru.

Maryknoll Sr. Elsie Monge, executive director for Ecuador's Ecumenical Commission of Human Rights, said her group wrote a letter Francis ahead of visit telling him how devastating the mining is for nature and asking him to address it with President Rafael Correa.

"I think his presence is an occasion for people to reflect on the need to go deeper, to get to the causes of poverty, of infringing the rights of the nature," Monge said of Francis. "There are things that are talked about, but I think with the way the pope takes it on himself ... it's not something abstract."

Francis flew to Guayaquil on Monday morning from Quito, where he landed from Rome on Sunday afternoon. Earlier in the morning, he visited a sanctuary in the city dedicated to divine mercy, where he visited briefly with a packed and smiling crowd.

Returning to Quito Monday afternoon, the pontiff met for an hour privately with Correa at the country's presidential palace. Afterwards, he took a short tour of the neighboring Catholic cathedral.

Scheduled to give a several minute greeting from the cathedral's steps to the thousands pressed into the city's Plaza Grande to see him, Francis instead offered a brief off-the-cuff blessing stressing the need for the country to not exclude anyone.

"I will give a blessing for everyone, for your families, for all your loved ones, and for this great and noble Ecuadorian people so that there are not any differences, no exclusions," the pontiff told the crowd.

Francis then asked that they "not discard anybody ... and [that] nobody be left out of this great nation of Ecuador."

In his homily in Guayaquil Monday, the pope also reflected on the role of Mary in the Gospel story of the wedding feast, saying the story shows her as being attentive to the needs of those around her and willing to act in order to serve them.

Mary's direction to attendants at the feast to listen to Jesus so as to allow the miracle of the wine, the pope said, is also an invitation to people today "to put ourselves at Jesus' disposition, who came to serve and not be served."

"Service is the criteria of true love," he said. "And it is learned especially in the family, where we become servers by loving each other."

"In the heart of the family, nobody is discarded," Francis said, adding that there are no inequalities among family members.

Mary also teaches people "to leave our families in God's hands [and] to pray, kindling the hope that our worries are also God's worries," the pope said.

Francis told crowds at the Quito airport Sunday that he wanted to reach out to all in the country during his brief visit and was "filled with excitement and hope" for the trip.

The pope will meet Tuesday with the country's bishops and with members of civil society and will also celebrate an outdoor Mass again expected to attract crowds in the millions.

On Wednesday morning, Francis will meet with clergy and religious before heading on to Bolivia. He will continue on to Paraguay on Friday before returning to Rome on Sunday.