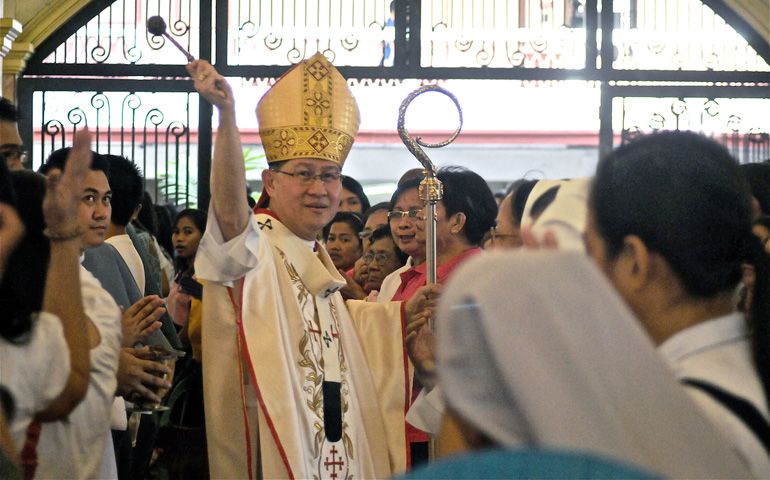 Manila, Philippines — The surprise appointment to cardinal of Manila Archbishop Luis Antonio Tagle last month promises mutual benefits to the Philippines and the universal church, especially during the Year of Faith, said an official with the Catholic Bishops' Conference of the Philippines.

Bishop Leonardo Medroso of Tagbilaran, a member of the bishops' conference's Permanent Council, said Tagle's membership in the College of Cardinals gives the cardinal a universal jurisdiction.

"He would be called to Rome for conferences, he would be consulted directly by the Holy Father with regards to matters of faith and morals," Medroso, also a canon lawyer, said Monday.

"Of course, [he would also be consulted about] our culture, how our faith and our morals are being incarnated in our culture here in the Philippines," he added. "As a Filipino cardinal, Tagle would bring with him some concrete ways of expressing the faith that have been revealed to us in the Bible, in our tradition, but the specificity of that faith expressed by the Filipinos."

Medroso said a cardinal is in the best position to express that dimension of his people's faith. He said he believes Tagle "can articulate that very well. [Tagle] is a guy who is very sensitive and attuned to the Filipino culture and ways."

Tagle, 55, is among six new cardinals who will be officially created at the Nov. 24 consistory, which Pope Benedict announced Oct. 24 during the Synod of Bishops on new evangelization.

Ordained a bishop in 2001, Tagle, a leading theologian in Asia, assumed leadership of Manila archdiocese in December 2011, succeeding Cardinal Gaudencio Rosales, who was 79 when Rome accepted his resignation in October 2011. Before his installation in Manila, Tagle had assisted in several synods and was member of the International Theological Commission of the Vatican from 1997-2002.

"We are very hopeful -- and this hope is based on facts -- that our newly appointed Cardinal Tagle, without imposing, could make himself be heard and his opinions would be considered seriously by the other cardinals and the Holy Father," Medroso said.

"When people talk about [Tagle's] friendliness with the pope, they mean the Holy Father has seen also [Tagle's] independent mind, not really veering away from the church, but within the spectrum accepted by the church," Medroso added.

He said Tagle's familiarity and effectiveness with new media, his natural gift for communication, his credibility and "closeness to the people" could also help him inspire people to contribute to the mission and life of the church in the Philippines and the world.

Tagle's elevation to cardinal is "very significant at this stage of our history because our faithful people are becoming more and more influenced by technology, secularism and materialism," Medroso said. He said Tagle "has the capacity to make people recognize these problems, as he did in his sermon on practical atheism on Saturday."

Belief and trust in the Year of Faith

Last Saturday, two days after returning from the synod, Tagle led the launch of Manila's celebration of Year of Faith, which began Oct. 11 and runs through Nov. 24, 2013, with a Mass at San Fernando de Dilao Church in Paco, Manila. That initial event and Tagle's remarks about the church celebration caught the attention of newspapers and other mass media over the weekend.

Traditional street dancing, bands, book sales and a simple community lunch ushered in Manila's celebration of Year of Faith. Tagle, in his homily delivered mostly in Tagalog language, said the year was dedicated to mark the 50th anniversary of the opening of the Second Vatican Council and the 20th anniversary of the promulgation of the Catechism of the Catholic Church that aimed at church renewal.

Instead, people's faith has grown weaker and many have drifted away from the church, Tagle said.

"We might say that is something in other nations, but in our country, that is not our problem," he said. "Our churches are overflowing, our processions have very long lines, so many children are baptized every Sunday. ... Thank God faith is so alive in our country."

However, Tagle pointed out examples of "nominal atheism" and "practical atheism" in Philippines society. "There are some people who with their mouths say, 'I believe in God,' but in practice, have no use for God. On Sunday, they say very devoutly, 'I believe in God the Father Almighty.' ... Come Monday, they cheat, all because of money. They step on other people because they want promotion. They have no regard for goodness and justice, just to gain position. ... Maybe this person does not really believe in the true God."

Tagle stressed that the Year of Faith is for all and urged Catholics to proclaim their faith by telling others shamelessly that they are Catholic through words, by being joyful and to pray. Faith is a relationship with God that needs to be nurtured, and God initiates by speaking to people, Tagle said.

"This year, may we give more time for Jesus, who speaks to us through the Bible and the teachings of the church," Tagle said.

He said the challenge of the Year of Faith is to believe and to trust.

"How can people trust in God who they cannot see when we have no faith and can't trust in people who are visible to us?" Tagle asked.

Tagle shared how God surprised him during the synod, when Pope Benedict named him cardinal.

"I don't know what happened. It was very unexpected," he said.

He said the appointment challenges him and all Filipino faithful in this Year of Faith and the Oct. 21 canonization of San Pedro Calungsod.

"When God comes into our life, even when it is not the right time, or not in tune with our plans, or not according to what we are thinking, are we ready to believe? Are we ready to surrender and allow ourselves to serve as the way for his Word and his blessings on earth?"

Tagle invited churchgoers to "accompany, not only me, but the whole archdiocese." He said being made cardinal is not just recognition for him.

"What is really being recognized is all of us, the whole communion of God in the Archdiocese of Manila and the Philippines," he said. "The Holy Father wants our archdiocese to be always close to him, and our experiences, especially our testimonies of faith, to be part of his thoughts and enrich the universal church. That's why this is not about me, this is all of us. Together, we will journey in faith."