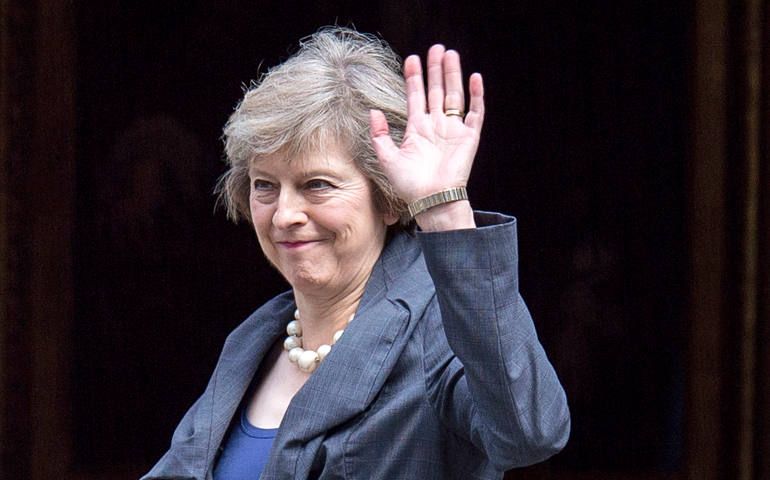 London — An English cardinal said he was delighted by the appointment of Theresa May as Britain's new prime minister because of the commitment she has shown in the fight against human trafficking.

Cardinal Vincent Nichols of Westminster, president of the Bishops' Conference of England and Wales, made his comments in a letter of congratulations to May, who took over as leader of the ruling Conservative Party Wednesday after David Cameron formally resigned.

The cardinal reminded May, who has served as British home secretary since 2010, of her attendance at the Vatican in April 2014 for the launch of the Santa Marta Group, an initiative launched by Pope Francis to help the victims of the human trafficking.

"This is a clear indication not only of your determination to use high political office for the protection of some of the world's most vulnerable people but also of your willingness to work with the Catholic Church at its highest levels," the cardinal said in the letter, released to the media Tuesday.

"I am personally delighted at your appointment," said Nichols.

"I know from the work we have done together that you have so many qualities to bring to the service of our countries at this time," he wrote. "I appreciate the maturity of judgment, the steely resolve, the sense of justice and the personal integrity and warmth you have always shown."

The cardinal added: "As you take up this new and demanding office of prime minister, I assure you of my personal support, and I look forward to working with you across a wide range of issues in service of the common good."

May, 59, emerged as the favorite candidate to succeed Cameron, who announced his resignation after a June 23 referendum in which Britons voted to leave the European Union.

After Andrea Leadsom, her closest rival, withdrew from the race Monday, the Conservative Party announced May would become the first female prime minister since Margaret Thatcher, also a Conservative Party member, stepped down in 1990.

Cameron offered his resignation to Queen Elizabeth II and, according to protocol, the queen summoned May to Buckingham Palace and invited her to form a new government on Wednesday.

May had been a supporter of the campaign to keep Britain within the European Union but has indicated that she intends to honor the wishes of the British people and to take the country out of the bloc by invoking Article 50 of the Lisbon Treaty.

"Brexit means Brexit -- and we're going to make a success of it," she said, referring to the term coined to refer to Britain leaving the EU.

Amid Brexit, Europe's church navigates competing perspectives over the future

DAPA and Brexit: Is the Left up to the challenge?

What chance has idealism in this endlessly divided world?