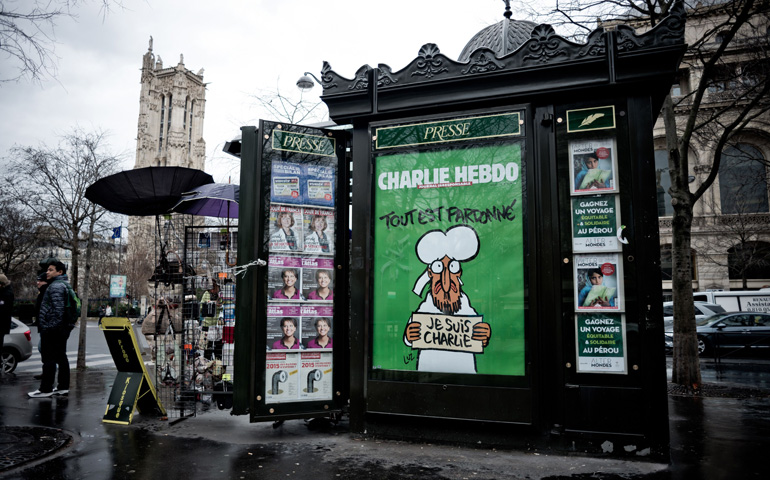 A newsstand in Paris displays a poster of the Jan. 14 issue of "Charlie Hebdo." (Newscom/SIP/Nicolas Messyasz)

In the weeks after Islamic extremists inflicted France's worst terror outrage in decades, the country is still coming to terms with the horror that unfolded on the peaceful streets of Paris.

While the attacks on the satirical Charlie Hebdo weekly magazine and a Jewish supermarket brought a show of national unity in France and solidarity from around the world, they also raised urgent questions.

In the weeks ahead, France's long-suffering Catholic church could offer important help in finding answers.

"People are still appalled at these shocking events; they suggest there's something very wrong in our country," Antoine Renard, president of France's National Federation of Catholic Family Associations, told NCR. "It'll be up to the politicians now to take decisions and show directions. But we also need a national discussion on the whole nature of our society and the key assumptions that guide it."

On Jan. 7, two masked, Kalashnikov-wielding brothers, Cherif and Said Kouachi, burst into the offices of Charlie Hebdo, claiming to be avenging the Prophet Muhammad for the magazine's satirical cartoons.

After killing 12, including two policemen, the Kouachis made off into the French countryside, where they were cornered and killed two days later after a massive police manhunt.

On Jan. 9, another gunman, Amedy Coulibaly, took over a kosher supermarket at the capital's Porte de Vincennes, dying in a hail of bullets after killing four Jewish hostages.

An ashen-faced François Hollande, France's Socialist president, declared a national day of mourning, while the killings were denounced by the head of the French Council of the Muslim Faith, Dalil Boubakeur, as "an attack on democracy and press freedom."

"Freedom of expression is a fundamental element of our society, a society made up of all manner of diversities," the Bishops' Conference of France noted in a statement. "The barbarism shown by these killings wounds us all, and in this situation, when anger may overcome us, we must devote attention more than ever to our weakened fraternity."

Up to 5 million people later turned out at mass weekend rallies on Jan. 10-11 as similar solidarity gatherings were staged in cities across Europe.

But anti-Muslim backlash followed, too, as mosques were defaced and ordinary Muslims vilified and intimidated.

For many, the atrocity raised key questions that gain a special urgency in traditionally secular, republican France, where religious faith is seen as a private affair, under the guiding principle of laïcité.

Satirists and cartoonists at Charlie Hebdo, who regularly pilloried Islam and Christianity, had long insisted they weren't against religion as such, only its corrupt and intolerant expressions.

Yet some observers say the weekly abused rather than upheld the idea of free speech and went too far, even by permissive French standards. They say while press pluralism and freedom are essential for the vitality of any democracy, those who exercise them must act responsibly, recognizing that their words and images have power. And while humor and irony can be important tools for combating fanaticism and fundamentalism, they shouldn't extend to vulgar material that merely fuels distrust and hatred.

"We should ask what we are doing, with our writings, speeches and actions, to encourage coexistence and a better reciprocal awareness, and to promote the values of respect, dignity and fraternity," France's Catholic daily newspaper La Croix commented Jan. 13. "Following the news with a speed close to hysteria, spreading risky, unchecked information, circulating degrading images, expressing or reproducing words of contempt, disavowing and mocking the spiritual dimension ... these create numerous occasions for coming unstuck."

Dilemmas over reporting religion aren't new in France, where 40 percent of the population denies any faith, and church and state were strictly delineated under a 1905 "Separation Law."

When the Socialist Party was returned to the government in summer 2012, it set up an "Observatory on Laïcité" to reaffirm secular principles, which many believed had been eroded under Hollande's center-right predecessor, Nicolas Sarkozy.

In September 2013, a 17-point "Charter of Laïcité" was sent to all state schools, assuring "respect for all beliefs," but also reimposing a 2004 law banning Muslim veils and "ostentatious religious symbols."

Although aimed primarily at curbing fundamentalism among Muslims, who now make up a 10th of France's 60 million inhabitants, the "new laïcité" was viewed cautiously by Catholics too, who traditionally make up two-thirds.

While French law protects religious believers, as citizens, from defamation and slander, it provides little if any protection for religion as such.

Some feared the new Socialist initiatives risked exacerbating a sense of alienation among some religious citizens, which appears to have seen its harshest expression in the latest Paris killings.

Fr. François Euvé, editor of France's Jesuit Études monthly, says he took the controversial decision in mid-January to republish some of Charlie Hebdo's covers that pilloried the Catholic church to show how Catholics are "capable of keeping a distance" when mocked and scorned.

He admires Jews for their "vigorous capacity for self-derision" and hopes French Muslims will, in time, develop similar spiritual and psychological defenses. Shrugging off ridicule, without emotional overreactions, signifies a strong character -- and a strong faith.

Archbishop Pascal Wintzer of Poitiers is one of many church leaders arguing similarly.

French Catholics are accustomed to seeing themselves mocked and ridiculed, the archbishop noted in an online statement. And among the vast majority, the "ancient French tradition" of satire rarely provokes strong reactions.

Yet both sides should also be showing restraint -- "those wield humor and irony," and "those who feel themselves attacked."

For now at least, governments in France and around Europe are reviewing security, and counting on religious leaders to help ensure social stability.

In a Jan. 12 appeal, the French bishops' conference urged Catholics to "entrust to God the blind souls of the terrorists," but also to remember that all freedoms were "intrinsically linked together."

If press freedom remained "one of the signs of a solid society, open to democratic debate," so too did that society's capacity "to assign a worthy place for every person, with respect for origins, religion and uniqueness."

"What kind of society do we wish to build together?" the bishops asked. "What place do we reserve for the weakest, for the excluded and for cultural differences? What culture do we wish to transmit to the generations who will follow us? What ideal of our human community are we proposing to young people?"

Renard thinks it was unwise in the days after the Paris attacks to depict Charlie Hebdo as a heroic symbol, and for the new edition of Charlie Hebdo to make fun of the Prophet Muhammad again on its cover.

Aided by 14,000 donations, as well as a French government grant of a million euros, the issue was reported by Jan. 16 to have sold 5 million copies worldwide, compared to its normal print run of 60,000. But it will have provoked Muslims again at a time when the time-honored French principles of liberty, equality and fraternity need stressing as never before.

"We should remember that these murderers were French, brought up and educated here in France, and we need to ask how they could have acted in a way which all the rest of society rejected," Renard told NCR.

"We need clear Catholic voices now, with a message about overcoming scorn and contempt. As so often, France is leading the debate in Europe, but not in the way we would have hoped."

[Jonathan Luxmoore is a freelance writer covering European church news from Warsaw, Poland, and Oxford, England. His latest two-volume book, The God of the Gulag, will be published in 2015.]

A version of this story appeared in the Jan 30-Feb 12, 2015 print issue under the headline: Catholic church helps society reflect after attacks.