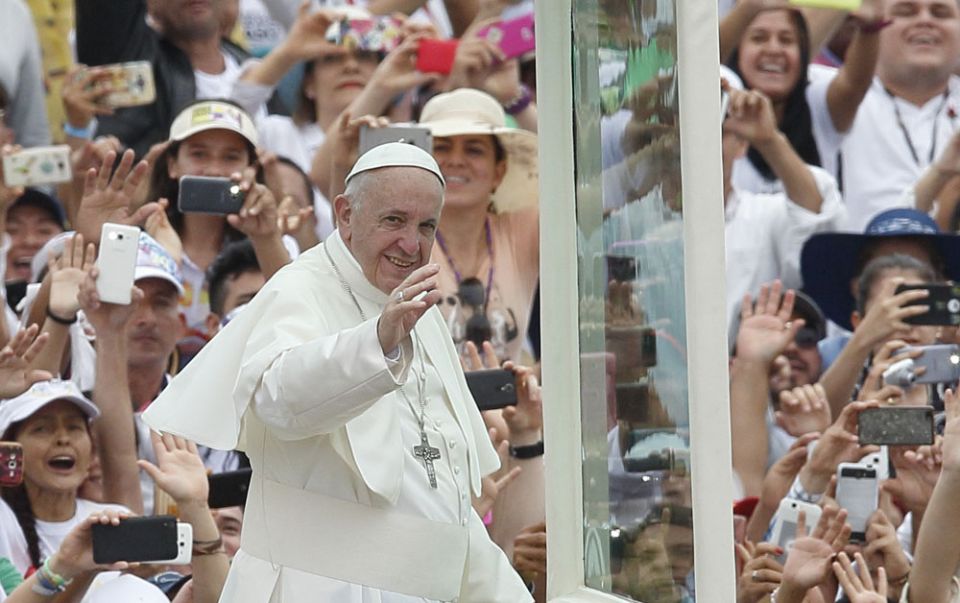 Pope Francis greets the crowd as he arrives to celebrate Mass at Catama field in Villavicencio, Colombia, Sept. 8. (CNS/Paul Haring)

VILLAVICENCIO, COLOMBIA — In a visit to an area where the fighting in Colombia's 50-year civil war was the most gruesome, Pope Francis Sept. 8 called on all victims of the bloodshed to "rise up out of the swamp of violence and bitterness" in order to embark on a new path forward for their country.

Flying 75 miles south for the day from the capital of Bogotá, the pontiff asked those who had personally experienced a war in which some 220,000 were killed to set aside their desire for vengeance against their aggressors in order to open the way for reconciliation.

"When victims overcome the understandable temptation to vengeance, they become the most credible protagonists for the process of building peace," the pope told hundreds of thousands in a homily during an outdoor Mass here, where one infamous 2002 bombing killed 119 noncombatants hiding in a church.

"Reconciliation is not an abstract word," Francis told the crowds, many who had survived such awful violence. "Reconciliation means opening a door to every person who has experienced the tragic reality of conflict."

"What is needed is for some to courageously take the first step in that direction, without waiting for others to do so," he continued. "We need only one good person to have hope! And each of us can be that person!" 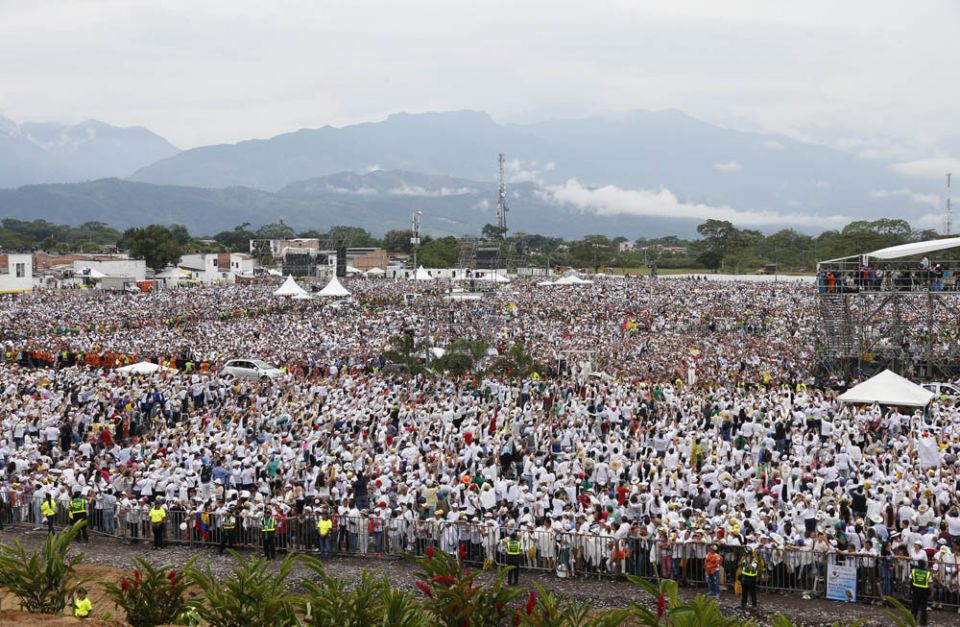 Francis was speaking on his second full day in Colombia, which he is visiting through Sept. 10. The papal trip comes nearly a year after the Colombian government and the rebel group FARC finalized a peace deal ending a brutal guerilla war that started in the 1960s.

Villavicencio is a small city on the wide plain east of the Andes Mountains. It is part of a cattle ranching area that became a hotbed for guerilla movements through the decades of conflict.

The city became known worldwide after a May 2, 2002 bomb launched by the FARC during a battle with the paramilitary United Self-Defense Forces of Colombia fell on a church where people were seeking refuge.

One of the survivors of that bombing said he saw Francis' journey to Villavicencio as a message of "great solidarity" with the victims of the violence.

Leiner Palacios Asprila, who was in an Augustinian parsonage adjacent to the church when it was bombed, also said he thinks the pope's words can help those opposed to the peace process change their minds.

"I believe that we are living a very delicate moment in Colombia with great polarization," said Palacios, referring to the nearly 50-50 split in the country between people who approve and disapprove of the deal. "The pope can help all the people who are unsure about the process to think differently about it."

Crowds in Villavicencio had gathered since early in the morning on a humid, drizzly day to take part in the Sept. 8 Mass. They nearly obstructed the route as Francis rode in the pope-mobile from the airport to the outdoor area where the Mass was celebrated, pressing in towards the vehicle and slowing traffic. 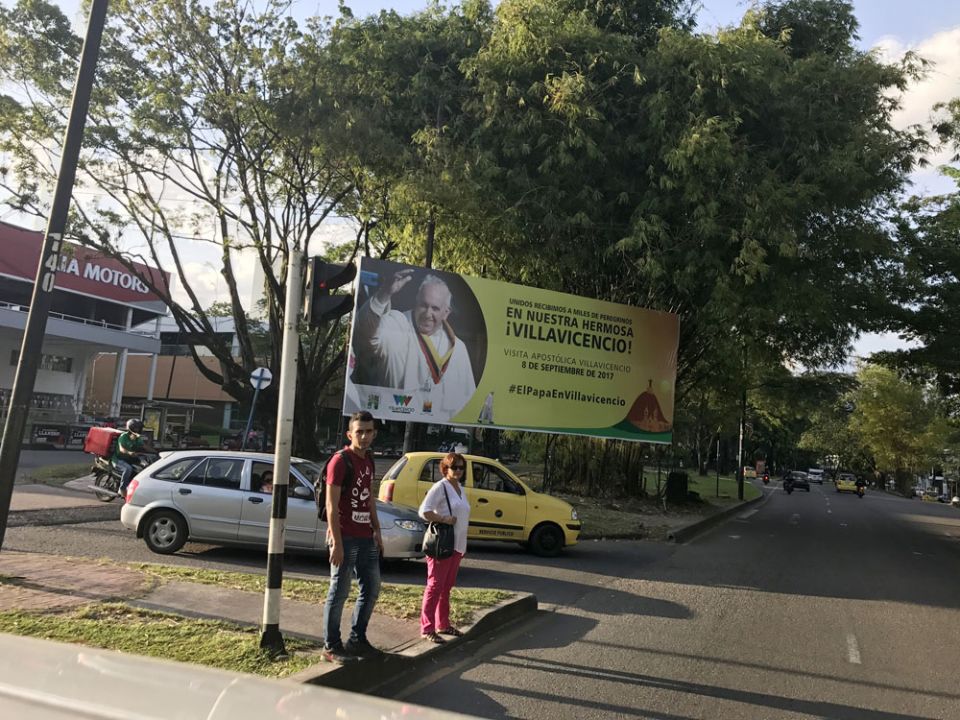 People were dressed in summer clothes, with shorts, flip-flops, and some cowboy hats. Some carried banners while others stood on plastic chairs outside small restaurants and food stands to try to see the pope.

Later on Sept. 8, Francis took part in a prayer meeting for national reconciliation with some 6,000 people at Villavicencio's Las Malocas Park. After a reading of Psalm 85 — "Love and truth will meet; justice and peace will kiss" — the pope heard testimonies from four different representatives of the decades-long violence.

Central to the event was a figure of Christ taken from the church bombed in 2002 that has become a potent symbol of the decades of violence. Known as the Cristo de Bojayá or the "mutilated Christ," it is a Christ statuette that became separated from a crucifix and lost its arms and legs in the attack.

Francis began his remarks by reflecting on the Christ figure, saying it shows "the immense suffering, the many deaths and broken lives, and all the blood spilt in Colombia these past decades."

"[Christ] teaches us to transform pain into a source of life and resurrection, so that, with him, we may learn the power of forgiveness, the grandeur of love," said the pontiff.

Francis ended his address with a plea to the Colombian survivors of war.

"I wish ... as a brother and a father, to say this: Colombia, open your heart as the People of God and be reconciled," said the pontiff. "Fear neither the truth nor justice."

"Do not resist that reconciliation which allows you to draw near and encounter one another as brothers and sisters, and surmount enmity," Francis said. "Now is the time to heal wounds, to build bridges, to overcome differences. It is time to defuse hatred, to renounce vengeance, and to open yourselves to a coexistence founded on justice, truth, and the creation of a genuine culture of fraternal encounter."

The pope was celebrating Mass Sept. 8 for the feast of the Nativity of the Blessed Virgin Mary. 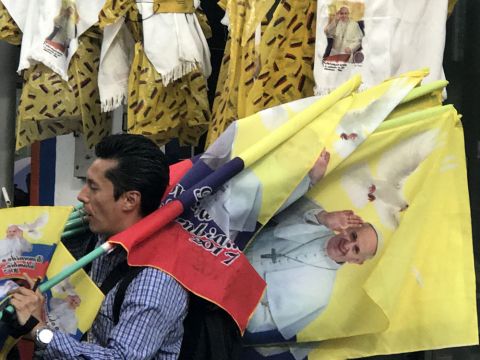 Francis also beatified two Colombians during the liturgy: Bishop Jesus Emilio Jaramillo Monsalve, a 20th-century prelate known for speaking out against guerilla militants; and Fr. Pedro Maria Ramirez Ramos, who was murdered at the outbreak of the prior 1948-58 Colombian civil war.

The pope was reflecting in his homily on the day's reading from Matthew's Gospel, in which the evangelist recounts the genealogy and birth of Jesus — listing his lineage from Abraham, Isaac, Jacob and David; from Tamar, Rahab, Ruth and Mary.

"By making himself one of us, God wanted to announce that the history of the just and of sinners runs through his blood, that our salvation is not a sterile entity found in a laboratory, but rather something concrete, a life that moves forward," said the pontiff.

"This long list tells us that we are a small part of a vast history," said the pope. "It also integrates in our history of salvation those pages which are the darkest and saddest, moments of desolation and abandonment comparable to exile."

Francis also said the Gospel reading's description of Jesus' female ancestors recalls the "stories of scorn and subjugation" faced by women in antiquity.

"In communities where we are still weighed down with patriarchal and chauvinistic customs, it is good to note that the Gospel begins by highlighting women who were influential and made history," said the pontiff.

Francis began his visit to Colombia Sept. 7 in Bogota, where he met with President Juan Santos, the country's bishops, and representatives of the regional Latin American Episcopal Conference. In remarks that day at the Casa de Nariño presidential palace, the pope asked Colombians to have the determination to "flee from the temptation to vengeance."

The pope is to return to Bogota the evening of Sept. 8. He is to visit the Colombian cities of Medellín Sept. 9 and Cartagena Sept. 10 before returning to Rome.