Pope says ultimate cause of war is social inequality 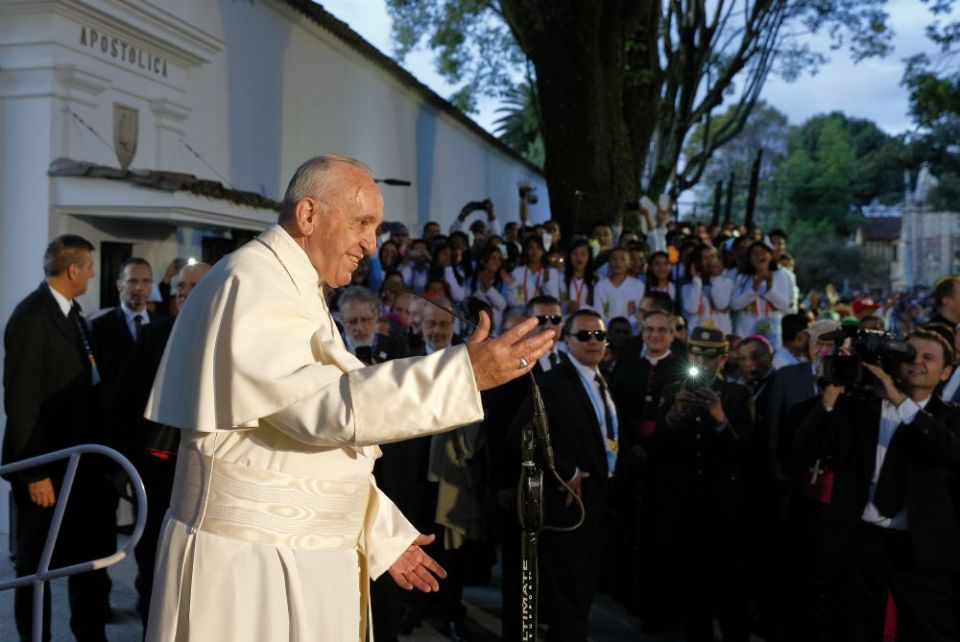 BOGOTÁ, COLOMBIA — Pope Francis exhorted Colombian political leaders Sept. 7 to protect the peace deal that recently ended a bloody 50-year war in their country, despite its unpopularity among nearly half the population that thinks it treats former guerilla militants too kindly.

At points during remarks to some 750 members of Colombia's elite outside the Casa de Nariño presidential palace, Francis appeared almost to be begging for the deal.

In fact, Francis ended his address with a quiet plea. "There has been too much hatred and vengeance," said the Argentine pope, speaking quietly as he looked up from his podium. "We do not want any type of violence whatsoever to restrict or destroy one more life!"

Francis asked in particular that the political leaders would have the determination to "flee from the temptation to vengeance" after a war that has claimed some 220,000 victims and displaced millions.

"Despite obstacles, differences and varying perspectives on the way to achieve peaceful coexistence, this task summons us to persevere," he said. "The more demanding the path … the greater must be our efforts to acknowledge each other, to heal wounds, to build bridges, to strengthen relationships and support one another."

Francis is visiting Colombia, which sits at the northern tip of South America with a population of some 49 million, through Sunday. The papal visit comes nearly a year after the Colombian government and the rebel group FARC finalized a peace deal ending a brutal guerilla war that started in the 1960s.

While the deal has come under criticism from some Colombians for allegedly treating the FARC too kindly, Francis told journalists on his flight from Rome Wednesday that his trip is meant to help Colombia "go forward on its path to peace."

Colombian Catholic leaders have described the division in the country over the deal as near total.

"Colombia is divided and how the pope will be able to make peace with both parts of the country — that will be a big challenge," Raleigh, North Carolina Bishop Luis Zarama, who emigrated from Colombia to the U.S. in the 1990s, said in an August interview.

Francis spoke Thursday following Colombian President Juan Santos, who received the Nobel Peace Prize last year for his work in obtaining the peace deal but has historically low approval ratings, with some figures having only 24 percent of Colombians approving of his work.

Santos thanked Francis for "accompanying us in this unique moment in the history our country." The president said his nation is taking the "first, most important step" towards reconciliation with the peace deal and said his people need "the marvelous force of love" that helps people have the capability to forgive one another.

In his speech, Francis also called on Colombian leaders to seek to end social inequality, which he said is the ultimate cause of war.

Noting that the official Colombian motto is "Freedom and Order," Francis said: "Laws are required which are not born from the pragmatic need to order society but rather arise from the desire to resolve the structural causes of poverty that lead to exclusion and violence."

"Only in this way can there be healing of the sickness that brings fragility and lack of dignity to society, leaving it always vulnerable to new crises," Francis said. "Let us not forget that inequality is the root of social ills." 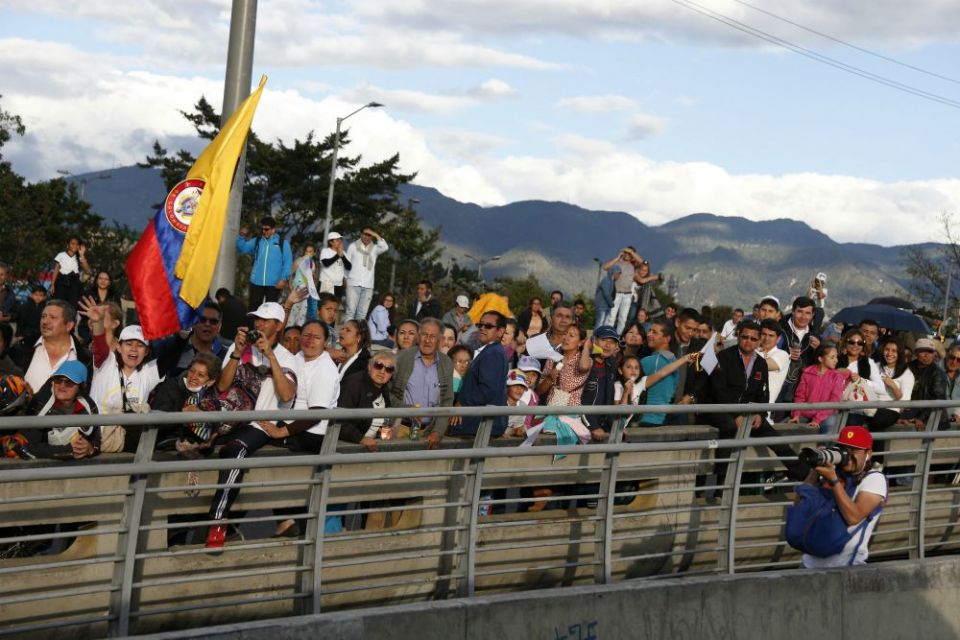 Francis met privately with Santos inside the presidential palace shortly after the two leaders gave their speeches Sept. 7. Francis was also later given the ceremonial keys to the city of Bogotá by Mayor Enrique Peñalosa Londoño.

Later in the morning, the pope visited Bogota's Cathedral of the Immaculate Conception. He then went to the nearby cardinal's palace to address the Colombian bishops.

Francis told the 130 prelates assembled for the talk that as pastors they "are aware as are few others how marred is the face of this country." He asked them to be "guardians of the basic parts that make the nation one despite all its wounds."

"Many people can help with the challenges facing this nation, but your mission is unique," the pontiff told the bishops. "You are not mechanics or politicians, but pastors. Christ is the word of reconciliation written on your hearts."

"From your lips as legitimate shepherds of Christ, Colombia has a right to be challenged by the truth of God, who never ceases to ask: 'Where is your brother?' " said Francis. "That question may not be silenced."

At the beginning of the meeting with the bishops, Bogotá Cardinal Rubén Salazar Gómez offered Francis a greeting, as did the president of the Colombian bishops, Villavicencio Archbishop Oscar Urbina Ortega.

Crowds greeting Francis in Colombia have been enthusiastic and large. As the pope journeyed from the airport upon landing in the country Wednesday afternoon, people were lined up along the road for miles, standing dozens of rows deep to try and see the pontiff.

As the pope-mobile came by, people tried to run alongside it, jumping up and down and shouting as large groups of people broke into chants of "Francis, friend, we are with you." Others stood shoulder to shoulder on top of buildings trying to look down at the street. One sign read: "Welcome, brother Francis!"

In the afternoon Sept. 7, the pope is to meet with 62 members of the Latin American Episcopal Conference, a regional bishops' conference commonly known by its Spanish acronym CELAM and representing the 22 Latin American and Caribbean countries.

Each of the secretaries general of the individual Latin American bishops' conferences are set to attend, as are members of CELAM's administrative committee.

The pope will continue his trip Friday by visiting Villavicencio, a city near the Colombia-Venezuela border where some of the most brutal fighting between the Colombian government and FARC forces took place.

Francis will participate in a prayer gathering for national reconciliation and will also celebrate an outdoor Mass, where he will beatify two Colombians: Bishop Jesus Emilio Jaramillo Monsalve, a 20th-century prelate known for speaking out against guerilla militants; and Fr. Pedro Maria Ramirez Ramos, murdered at the outbreak of the 1948-58 Colombian civil war.

Francis is the third Catholic pope to visit Colombia, following Paul VI in 1968 and John Paul II in 1986. This is his 20th voyage outside Italy as pope, and Colombia is the 28th country he has visited. The pope's next scheduled visit is to Bangladesh and Myanmar from Nov. 27- Dec. 2.

As Cardinal Pell awaits sentence, his appeal is fast-tracked to June

Lebanon's church leaders to protesters: 'We hear your cry'