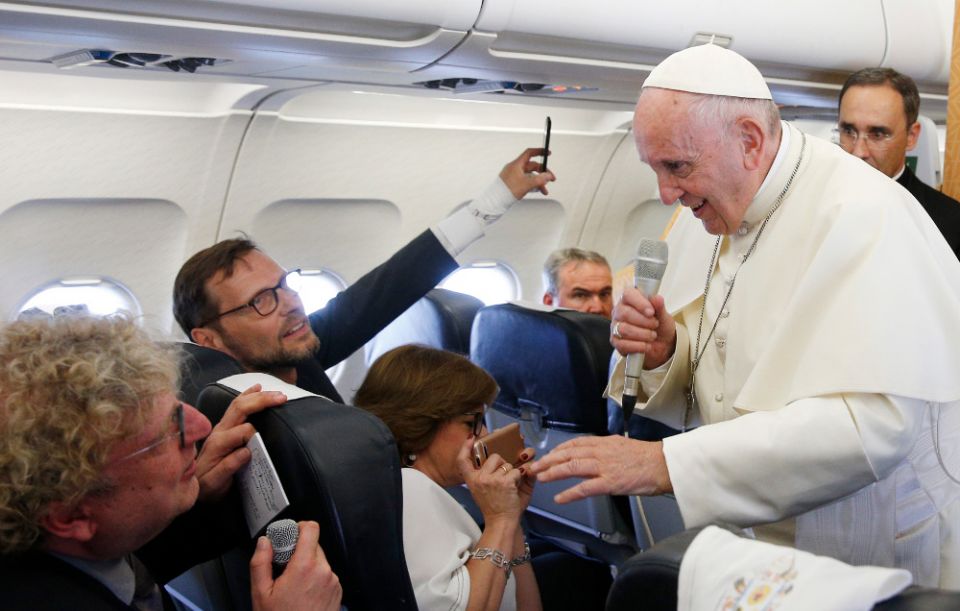 Pope Francis listens to a question from a journalist aboard his flight from Geneva to Rome June 21. (CNS/Paul Haring)

Aboard the papal flight from Geneva — Pope Francis said he was not "hitting the brakes" when he asked Germany's Catholic bishops to set aside proposed national guidelines on allowing Protestants married to Catholics to receive Communion, but taking time to ensure the idea "heads down a good path."

In a press conference aboard the papal flight back to Rome after his day-trip to Geneva June 21, the pope said his main consideration about the German proposal regards how the Catholic Church understands the differences in authority between an individual bishop and a national episcopal conference.

The pope said that while the church's formal Code of Canon Law allows for a local bishop to decide to give Communion in special cases, it does not allow for national conferences to do so.

"There is a problem because the code does not foresee that," said Francis. "It foresees the bishop of the diocese, but not the conference."

"Something tried by the bishops' conference immediately becomes universal," he continued. "And this was the difficulty of the discussion."

A question in the press conference asked about the news that Cardinal-designate Luis Ladaria, the prefect of the Congregation for the Doctrine of the Faith, had sent a letter to the German bishops asking them not to publish their guidelines, which received support of two-thirds of the country's prelates.

The pope said Ladaria wrote the letter with his permission. "He did not do it alone," Francis said. "I said, 'Yes, it is better to take a step forward and say that the document is not mature ... and that you should study the thing further.' "

"In the end, they will study it," he said. "I believe this will be a guiding document so that every diocesan bishop can work with what canon law already permits. It was not hitting the brakes. No, no. It is taking care of the thing so it heads down a good path."

The issue affects Germany more than most other countries, as the Christian community there is almost evenly split between Catholics and Lutherans.

Although the text of the German guidelines has not been made public, it is widely thought to consider situations in which a Lutheran married to a Roman Catholic and regularly attending Mass with the Catholic spouse could receive the Eucharist.

Francis referred to that older exchange during the June 21 press conference, saying he had responded then "according to the spirit of the Code of Canon Law."

"It is that spirit [the German bishops] are looking for now," he continued. "Maybe ... there was a bit of confusion, but this was the thing."

Read this next: Francis calls World Council of Churches to be more missionary

The pope also spoke at length during the press conference about his trip to Geneva, during which he visited the World Council of Churches in celebration of its 70th anniversary.

Francis said the visit, during which he held two public ecumenical encounters and took part in a private lunch, involved "deep dialogue" over global problems "with an intelligence that left me amazed."

"It was a day of varied encounters," he said. "The right word for the day is encounter. When one person encounters another ... this touches the heart, always."

US bishops stress need for Catholics to deepen understanding of Communion