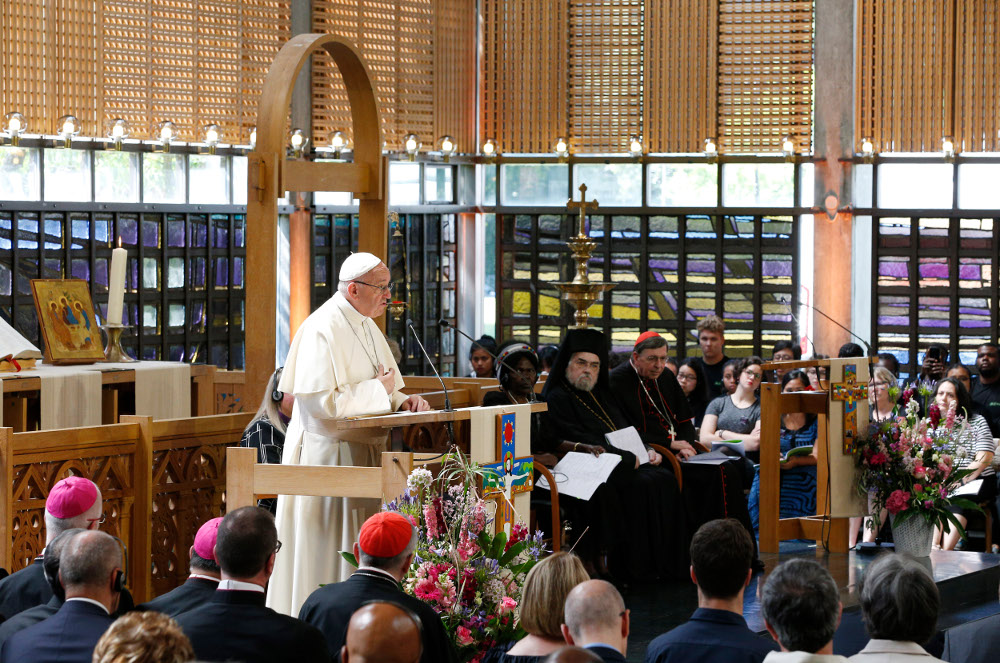 Pope Francis has called on the fellowship of 350 Christian denominations known as the World Council of Churches to be more missionary in its approach, warning the ecumenical organization against adopting "worldly ways of thinking" during a one-day visit here for its 70th anniversary.

In a speech to the council's central committee June 21 — the centerpiece of the 10-hour papal trip — the pope said that while he had come from Rome to thank the organization for its work pursuing unity among the different Christian churches he also wanted to "express a concern."

The concern, said Francis, "comes from an impression that ecumenism and mission are no longer as closely intertwined as they were at the beginning."

"Yet the missionary mandate, which is more than ... the promotion of human development, cannot be neglected nor emptied of its content," the pope continued. "It determines our very identity."

"The preaching of the Gospel to the ends of the earth is part of our very being as Christians," he said. "In the face of the recurring temptation to tailor it to worldly ways of thinking, we must constantly remind ourselves that Christ's church grows by attraction."

The pope took the 90-minute flight from Rome to Geneva June 21 for what organizers styled as an "ecumenical pilgrimage" to the World Council, an outgrowth of a late 19th-century ecumenical movement that brought together many Protestant denominations and Eastern and Oriental Orthodox churches.

Francis has been widely supportive of ecumenical endeavors during his five-year papacy.

His expression of concern to the World Council — which had its first assembly in 1948 and now represents some 500 million Christians — echoes his frequent exhortation that the Catholic Church cannot act like a "non-governmental organization" but must root its work in the preaching of the Gospel.

Several former ecumenical dialogue participants told NCR in advance of the pope's visit that it was taking on special significance because of the increasingly divisive nature of global politics. 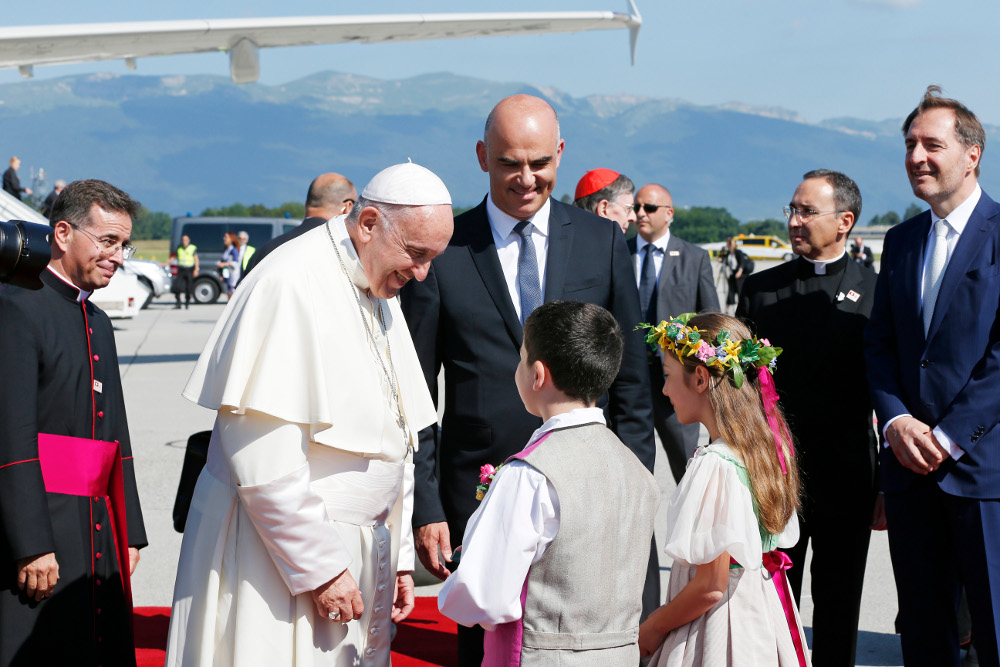 Pope Francis stands next to Alain Berset, center, president of the Swiss Confederation, as he greets children during an arrival ceremony at the international airport in Geneva June 21. (CNS/Paul Haring)

"What we're seeing around the world with the rise of populist and nationalist movements is greater and greater fragmentation," said Brooklyn Auxiliary Bishop James Massa, who led the U.S. bishops' ecumenical and interreligious secretariat from 2005-2011.

The pope's visit to Geneva has been given the theme "Walking, Praying and Working Together" and primarily consists of three brief encounters: an ecumenical prayer, a lunch with the council's leadership, and then an ecumenical meeting.

Francis' speech to the council's central committee took place during the ecumenical meeting. The pope told the international organization to take up an "increased missionary impulse."

"What is really needed is a new evangelical outreach," he said. "Just as in the early days, [when] preaching marked the springtime of the church, so evangelization will mark the flowering of a new ecumenical spring."

He also told the council that part of its role is to help people "grow in concern for events and situations that affect a great part of humanity but seldom make it to the front page."

"We cannot look the other way," said Francis. "It is problematic when Christians appear indifferent towards those in need."

"Even more troubling is the conviction on the part of some, who consider their own blessings clear signs of God's predilection rather than a summons to responsible service of the human family and the protection of creation," he continued.

"Let us ask ourselves: What can we do together?" he suggested. "If a particular form of service is possible, why not plan and carry it out together, and thus start to experience a more intense fraternity in the exercise of concrete charity?"

Before entering the Visser 't Hooft Hall at the Ecumenical Centre where the ecumenical meeting occurred, Francis met briefly with eight Koreans connected to the World Council: four from South Korea and four from North Korea.

Those from North Korea included members of the Korean Christian Foundation and the Korean Religionist Association, according to a council staffer on site.

The World Council's secretary general, the Rev. Olav Fykse Tveit, welcomed Francis at the beginning of the ecumenical meeting. He said that by the visit to their organization, the pope showed "that it is possible to overcome divisions and distance."

Tveit, a Norwegian Lutheran theologian, said that the World Council and the Roman Catholic Church are "called to the ministry of reconciliation."

Agnes Abuom, a Kenyan who serves as the moderator of the World Council, told Francis her organization had experienced "a new quality of cooperation" with the Catholic Church since his election.

Francis landed in Geneva early June 21. He was greeted at the airport by two former members of the papal Swiss Guard, and then held a 20-minute private encounter with the president of the Swiss Confederation, Alain Berset.

In brief remarks to journalists aboard the papal flight from Rome, the pope called the trip to Geneva "a trip towards unity, the desire for unity."

The pope's first public event was the ecumenical prayer. He offered a reflection on a portion of St. Paul's letter to the Galatians, in which the apostle calls on the early Christian community to "walk in the Spirit." 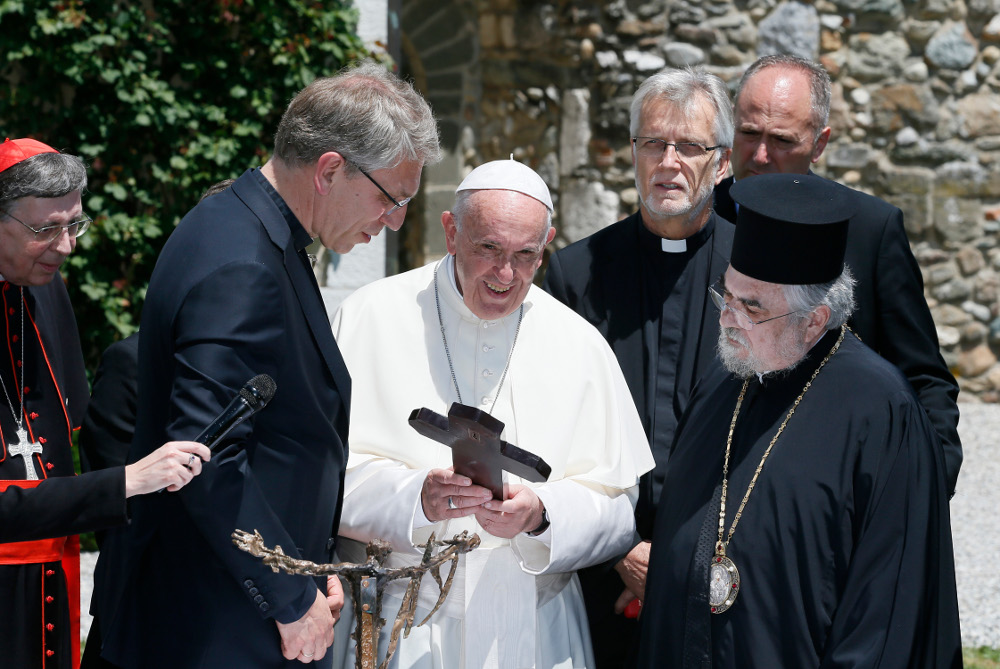 Pope Francis exchanges gifts with the Rev. Olav Fykse Tveit, general secretary of the WCC, and other Christian leaders at the World Council of Churches' Ecumenical Institute at Bossey, near Geneva, June 21. The cross was carved by a Kenyan artist and symbolizes disability. (CNS/Paul Haring)

"Our differences must not be excuses. Even now we can walk in the Spirit: we can pray, evangelize, and serve together."

Francis said that trusting in the working of the Spirit "is to operate at a loss, since it does not adequately protect the interests of individual communities, often closely linked to ethnic identity or split long party lines, whether 'conservative' or 'progressive.' "

"Ecumenism is 'a great enterprise operating at a loss,' " he said. "But the loss is evangelical, reflecting the words of Jesus: 'Those who want to save their life will lose it, and those who lose their life for my sake will save it.' "

"After so many years of ecumenical commitment, on this 70th anniversary of the World Council, let us ask the Spirit to strengthen our steps," the pope said later. "Our differences must not be excuses. Even now we can walk in the Spirit: we can pray, evangelize, and serve together."

Francis is the third pope to visit the World Council of Churches, following Pope Paul VI in 1969 and Pope John Paul II in 1984. The trip to Geneva is Francis' 23rd outside Italy; Switzerland is the 34th country he has visited.

The pope was to conclude his visit later June 21 by celebrating a Mass for the city's Catholic community at a local conference center. Francis' next scheduled visit is to Ireland Aug. 25-26, to participate in the World Meeting of Families.

A version of this story appeared in the July 13-26, 2018 print issue under the headline: Francis calls World Council of Churches to be more missionary.