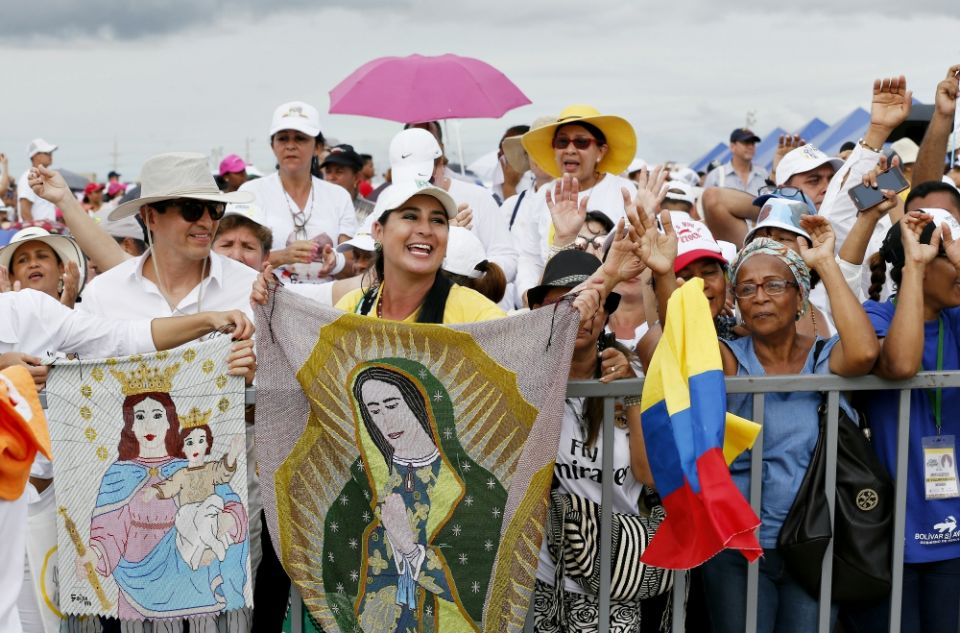 CARTAGENA, COLOMBIA — Some 220,000 people were killed in the brutal 50-year conflict among the Colombian government and rebel guerilla forces. An estimated 5.7 million were displaced from their homes. The fighting invaded people's everyday lives, with bombs even dropping on churches where people sought refuge.

In a homily to about a million of the survivors of the conflict on his last day visiting the country Sept. 10, Pope Francis told them that the process of recovery and reconciliation after the signing of a recent peace deal will be long.

Francis said they will have to build peace for themselves, step-by-step, and primarily with personal encounters between people who have harmed each other.

"This path of reintegration into the community begins with a dialogue of two persons," he told crowds gathered for the outdoor Mass at Cartagena's port on the coast of the Caribbean Sea. "Nothing can replace that healing encounter; no collective process excuses us from the challenge of meeting, clarifying, forgiving."

Francis said Jesus "always asks us to take a determined and sure step toward our brothers and sisters, and to renounce our claim to be forgiven without showing forgiveness, to be loved without showing love."

"Only if we help to untie the knots of violence, will we unravel the complex threads of disagreements," he said to the crowds, which stretched alongside the port's large shipping containers and cranes. "If Colombia wants a stable and lasting peace, it must urgently take a step in this direction!" 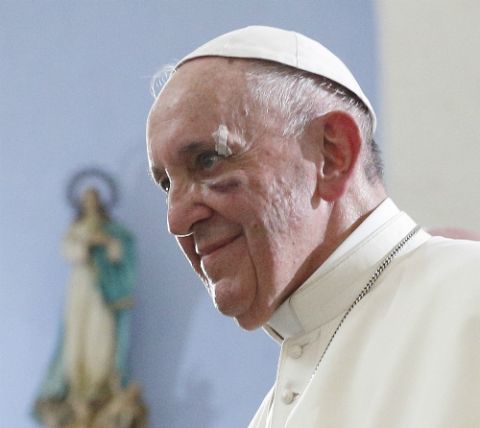 Pope Francis visits the Shrine of St. Peter Claver in Cartagena, Colombia, Sept. 10. The pope cut his head in the popemobile when it braked suddenly. (CNS/Paul Haring)

Francis' visit to Cartagena opened in dramatic fashion. While greeting crowds lining the streets of the city soon after arriving, the pontiff banged his head on the inside of the popemobile, which had slowed abruptly to avoid a throng of people pushing toward the vehicle.

The pope was left with a black left eye and a cut on the eyebrow that dripped blood onto his white cassock. The cut was bandaged, and he carried on with his program for the day. Asked what happened by someone in the crowd at an event later, Francis quipped: "I gave myself a punch!"

The pope has been visiting Colombia since Sept. 6. The focus of the trip has been to support a 2016 peace deal that ended fighting between the government and the guerillas of the Revolutionary Armed Forces of Colombia, known as FARC.

Although the deal earned Colombian President Juan Santos last year's Nobel Peace Prize, it remains unpopular with about half of his people, who think it treats the former guerillas too kindly.

In visits to four cities in Colombia in as many days, Francis has spoken again and again about the need for people here to find ways to move forward. During the pope's Sept. 8 visit to Villavicencio, a survivor of one of the most brutal attacks of the war said the speeches may bear good fruit.

Leiner Palacios Asprila, who was in a building adjacent to a church that was bombed May 2, 2002, killing 119 non-combatants, said he thinks the pope's words can help those opposed to the peace process change their minds.

"The pope can help all the people who are unsure about the process to think differently about it," Palacios told a small group of journalists Sept. 8.

One of the peace deal's most vocal critics, former Colombian President Alvaro Uribe, was seen in the crowd at the pope's Mass in Medellín Sept. 9. In a later tweet of gratitude to Francis for the experience, he said: "I will strive to improve on my weaknesses."

The pope flew to Cartagena Sept. 10 from the capital of Bogotá, where he had been spending each night in Colombia.

Cartagena, about 650 miles north of Bogotá, is one of the most historic seaside cities in the Americas. It was the main port of trade between Spain and its empire in the hemisphere and is now home to some 972,000 people and a thriving tourist industry.

The Mass Sept. 10, permeated at several points by the rhythmic drumbeat of Cumbia dance music, was Francis' last public event in Cartagena and Colombia. 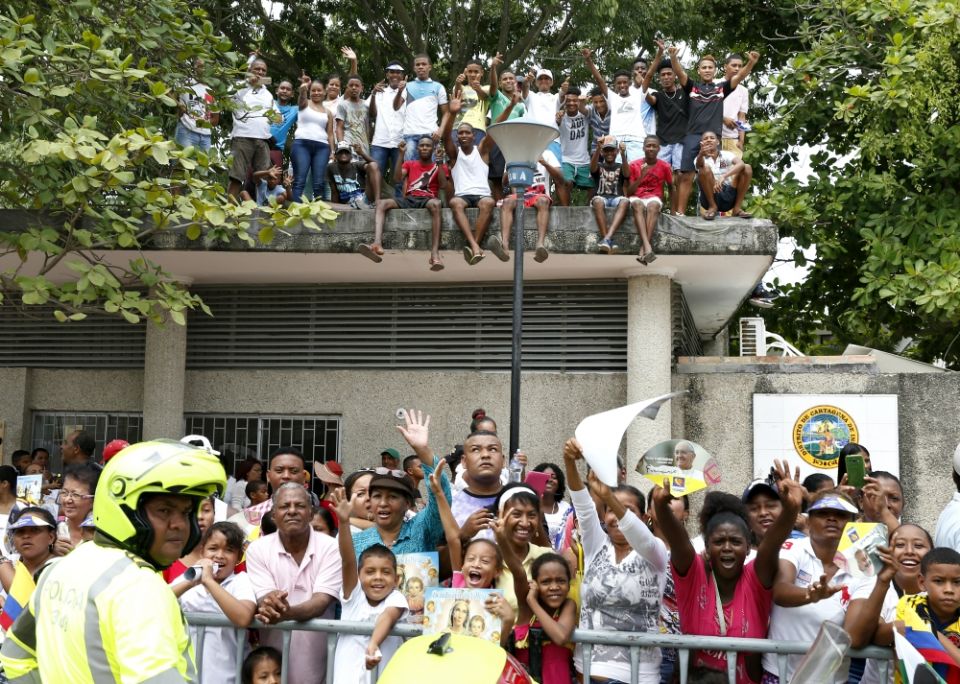 The crowd is seen on the roadway as Pope Francis blesses the cornerstone of Talitha Qum homeless shelter in Cartagena, Colombia, Sept. 10. (CNS/Paul Haring)

Earlier in the day, the pope had visited a new house for the homeless to bless its cornerstone and said the noontime Angelus prayer outside the Monasterio de San Pedro Claver, which houses the remains of the 17th-century Spanish Jesuit missionary who made his home in Cartagena and was known for his ministry to African slaves.

Francis mentioned Claver in his homily at the Mass, saying his example of caring for those who were treated at the time like merchandise shows we cannot "normalize" violence and exclusion but have to confront it.

"Alongside St. Peter Claver were thousands of Christians, many of them consecrated, but only a handful started a countercultural movement of encounter," Francis said. "He did not have prestigious academic qualifications ... but he had the genius to live the Gospel to the full, to meet those whom others considered merely as waste material." 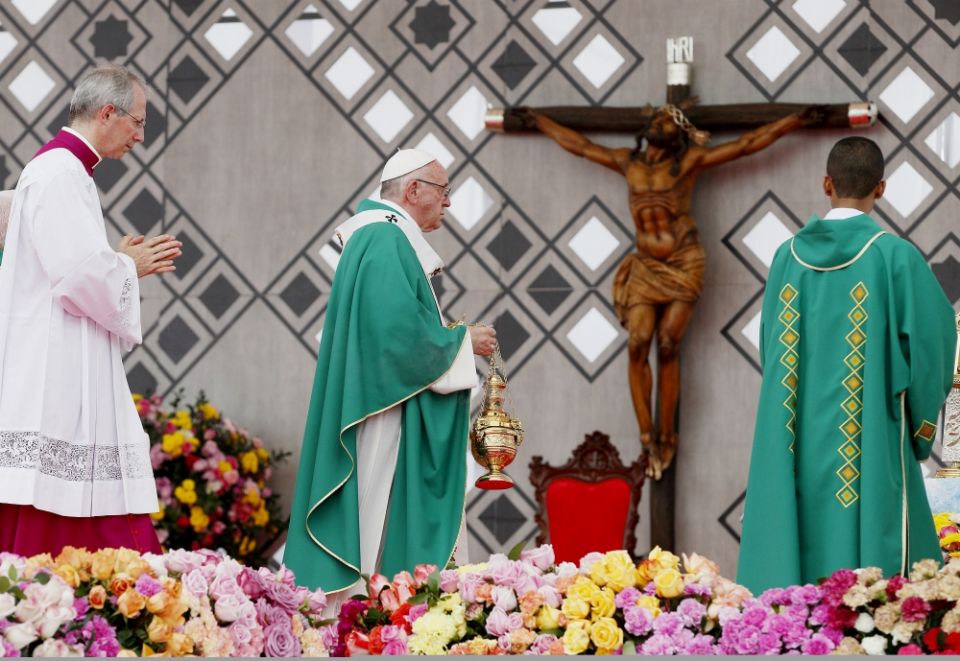 Francis said the reading speaks of "forgiveness, correction, community and prayer." He noted that the prior passage in the Gospel is the story of the good shepherd who leaves 99 sheep to save one who was lost.

"There is no one too lost to deserve our care, our closeness and our forgiveness," Francis said. "From this perspective, we can see that a fault or a sin committed by one person challenges us all, but involves, primarily, the victim of someone's sin. He or she is called to take the initiative so that whoever has caused the harm is not lost."

Francis has had a packed scheduled in Colombia. Before coming to Cartagena, he met with Santos in Bogotá Sept. 7, spoke to a prayer gathering for national reconciliation in Villavicencio Sept. 8, and celebrated a Mass with an estimated 1.3 million people in Medellín Sept. 9.

The pope is due to leave for Rome the evening of Sept. 10, returning to in his diocese around noontime Sept. 11.

How would foreign policy change if women held the reins of diplomacy?