German bishop rules out general invitation to Communion at congress 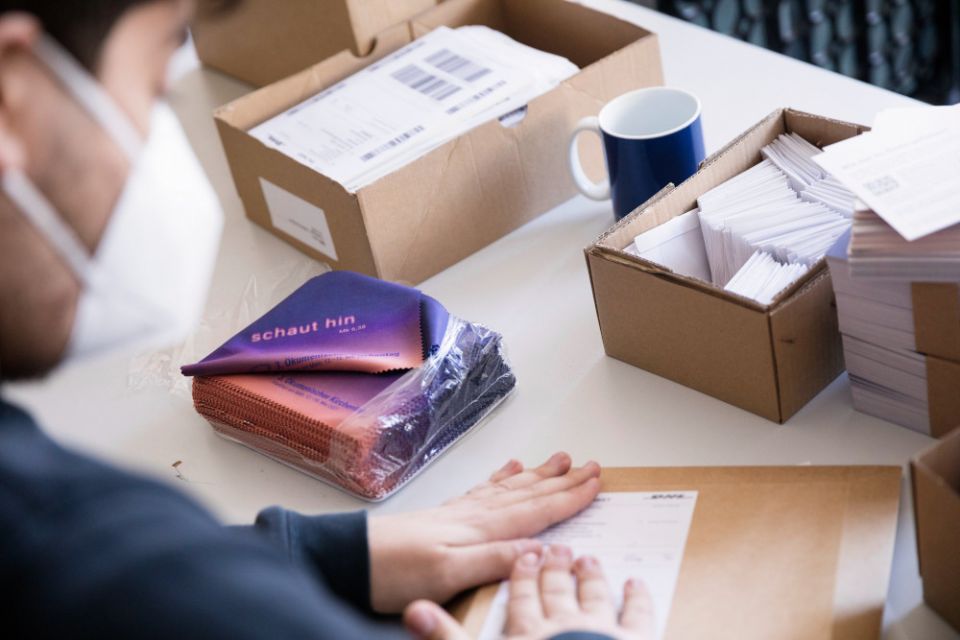 A volunteer packs parcels with items for Germany's third ecumenical convention, or kirchentag, in Frankfurt April 23, 2021. Most of the convention will be virtual. (CNS/KNA/Angelika Zinzow)

BONN, Germany — Bishop Georg Bätzing, president of the German bishops' conference, defended the plan for "ecumenically mindful" reception of Communion in Catholic and Protestant services during Germany's ecumenical congress May 13-16.

The bishop told KNA, Germany's Catholic news agency, May 11 that the services planned May 15 were not about "cross-denominational Communion in the sense of a general mutual invitation to participate in the Eucharist and the Lord's Supper" and were not about shared Communion services by clerics of various denominations.

Rather, they were about how to deal with the personal decision of conscience of individual Catholic or Protestant Christians, the bishop said.

"I respect such a decision and administer Communion if someone joins who believes what we Catholics believe and wants to receive the body of the Lord in faith in the real presence of Jesus Christ," he told KNA.

The bishop appealed to participants in Communion services not to make their participation "a demonstrative sign, but to respect the spiritual character and the honest personal decision of each and every individual." He said all non-Catholic Christians could not be invited to Communion because there was still no full unity between the separated churches.

He said Catholic canon law already allowed for the possibility of non-Catholics to receive Communion under certain conditions. "Without a doubt, however, we must continue the theological dialogue on the meaning of the Eucharist and the Lord's Supper and their significance for church unity," he said.

Canon 844 of the Code of Canon Law, says: "If the danger of death is present or if, in the judgment of the diocesan bishop or conference of bishops, some other grave necessity urges it, Catholic ministers administer these same sacraments licitly also to other Christians not having full communion with the Catholic Church, who cannot approach a minister of their own community and who seek such on their own accord, provided that they manifest Catholic faith in respect to these sacraments and are properly disposed."

Bishops from Europe, North America, Australia and southern Africa have issued guidelines for allowing interchurch couples to go to Communion together on special occasions; most list those occasions as family funerals and the baptism, first Communion, confirmation, ordination or wedding of their children. Some bishops also include the couple's wedding and wedding anniversaries, as well as Christmas, Easter and Pentecost.

From region to region, the guidelines reaffirm Catholic teaching that "eucharistic Communion is inseparably linked to full ecclesial communion and its visible expression."

There has been heated debate in the run-up to the ecumenical convention, or kirchentag, about proposals to allow the faithful to participate in the respective services of the other denomination on the basis of a decision of conscience. In response, the Vatican issued a clear rejection of general invitations to shared communion for Catholics and Protestants.

The theological understanding differs greatly between the Christian denominations. According to the Catholic view, Jesus is present in the bread and wine. The Protestant churches, by contrast, place the emphasis on the symbolic and commemorative character.

"This can then — in a second step — also have an effect on ecumenical relations," the bishop told KNA.

Most of the ecumenical convention will be virtual. KNA reported the kirchentag will open with an ecumenical service on a parking deck with a view of the famous skyline of Frankfurt's international banking center. It will be broadcast live on German television. The exact location will not be made public beforehand to avoid crowds gathering during the pandemic.

The digital program, with about 80 events each day, will focus on 10 main topics, including the church and power, international responsibility and the climate crisis. One hour will be devoted to each topic.

Jesus is life-giving bread, not just 'side dish,' pope says

The Eucharist is about more than Christ becoming present