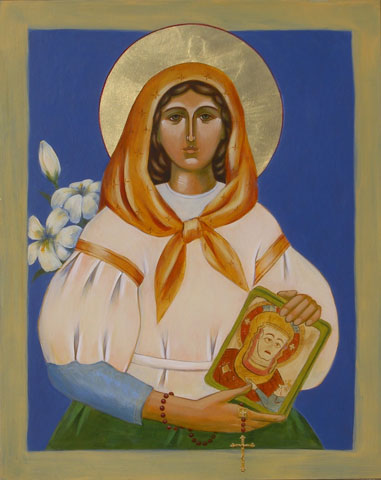 The story of Dymphna -- the patron saint of the mentally ill -- involves such horrors as incest and decapitation. However, her legacy launched a community of unprecedented and unrivaled compassion for the mentally ill.

Born in the seventh century, she hailed from the ancient kingdom of Oriel in the northeastern part of Ireland. She was the daughter of a pagan king, Damon, and a Christian mother of noble background. The website for the National Shrine of St. Dymphna in Massillon, Ohio, says that Dymphna, in addition to being a "bright and eager pupil," was "like her mother, a paragon of beauty." As she entered her adolescence, she chose Jesus for her "divine spouse" and took a vow of chastity.

Things were going well enough, until Dymphna's mother died. Dymphna's father was inconsolable with grief. Eventually, his advisers persuaded him to seek a new wife. He sent them far and wide to find him a bride equal to his former wife in charm and character.

When Damon's advisers returned empty-handed, his mental state, already tenuous, declined further. Strange thoughts entered his head, and he could not resist their direction.

When the king expressed his incestuous plans, Dymphna, thinking quickly, asked for time to consider becoming her father's new wife. There was no chance she would accept the proposal; the girl only recently had taken a vow of chastity; romance with her deranged father was not exactly on her to-do list.

She sought advice from her priest, Fr. Gerebernus, who had baptized both her and her mother. The horrified priest suggested that she flee immediately.

So Dymphna confiscated some of her father's riches and headed for the European continent, joined by Gerebernus and two servants. They arrived at Antwerp, where they rested for some days, before continuing their journey.

Ultimately, they found refuge in Geel (in what is now Belgium), at that time a sparsely populated village, home to a number of religious hermits. Using the money she brought along, Dymphna established a hospice for those of unsound mind.

Meanwhile, King Damon was none too pleased with his daughter's noncompliance. Though he had no wife, he had plenty of resources, which he used to track his disobedient daughter to Geel. When the king arrived with his men, Gerebernus confronted him, scolding him for pursuing such unnatural desires. These words of protest would be the priest's last, as he was promptly slaughtered.

With the holy man taken care of, Damon proceeded to his daughter, hoping that maybe she would now accept his proposal. Aware of the consequences, Dymphna again turned down her father. Enraged by the rejection, King Damon produced his dagger, and severed his child's head. She was 15 years old, and was slaughtered on May 15, now her feast day. Little to nothing is known about King Damon's life after this incident. One might assume there was further turmoil.

The slain Dymphna was heavily mourned, respectfully buried, and long remembered in the Geel community, both for her stoic demise and for her generosity in building a hospice. After a long period of being venerated, she was canonized in 1247.

In the mid-14th century, Geel erected a church in Dymphna's honor; it was built on the spot where she was buried. Around this time, rumors spread about disturbed individuals who were cured upon visiting Geel. As these accounts circulated, people began bringing disturbed family members, hoping for their own miracle. And many embattled souls made it to Geel on their own.

A building contiguous to St. Dymphna Church was built to accommodate the troubled pilgrims. Soon enough, the capacity of this structure was exceeded. Church authorities appealed to the citizens of Geel, who responded in a way that would eventually designate Geel as "the charitable city": They welcomed mentally ill strangers into their homes.

The Geel community showed remarkable compassion, particularly for an era when most any sort of psychological aberration was viewed as being due to demonic influence or possession. Ronald J. Comer's Abnormal Psychology mentions the typical techniques of the time for dealing with the psychologically aberrant. Exorcisms, of course, were performed. "Holy water" or "bitter drinks" might be administered. If these remedies failed to produce results, the ensuing therapy could consist of flogging, scalding, stretching of limbs, or starvation. It was hoped that these extreme measures might expunge the iniquity.

In contrast to these measures was the Geel way, in which the mentally ill, who were called "boarders" instead of "patients," became a valued part of the community. Many of the boarders helped with agricultural labor. They were allowed to go about the village, and some even became regulars at local taverns. Some boarders stayed in Geel for only a few months; others stayed for the rest of their lives.

For hundreds and hundreds of years, Geel was heavily influenced by purported miracles and the supernatural influence of Dymphna. This changed when St. Dymphna Church was closed by French revolutionary armies in 1797. Although the church would reopen, there was a paradigm shift after the French Revolution, as mental illness became the "concern of doctors, and not of pastors," according to Eugeen Roosens, author of Mental Patients in Town Life: Geel -- Europe's First Therapeutic Community.

In both its sacred and secular incarnations, Geel can be viewed as a forerunner of modern psychiatric community programs. News of its pioneering ways had spread across much of Europe by the 19th century. Reportedly, Vincent van Gogh's father tried to persuade his brilliant, tormented son to visit Geel. He never made it.

A version of this story appeared in the May 8-21, 2015 print issue under the headline: Saint’s legacy of compassion endures.