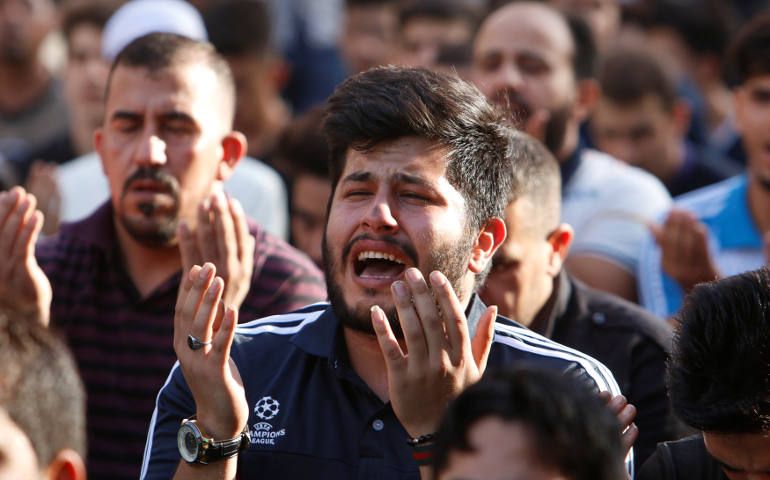 Muslim men pray July 6 at the site of a July 3 suicide car bomb attack at a shopping area in Baghdad. (CNS photo/Khalid-Mousily, Reuters)

Speaking at a prayer service Thursday in the Karrada section of Baghdad for the victims of the July 3 bombing that killed more than 290 people and wounded 200, the patriarch emphasized that "there is a spiritual, moral, and patriotic side for our prayer."

"In such a tragedy, we are joining millions of Muslims in praying for the affected families, that God may have mercy on the victims and bless the wounded with a speedy recovery," Sako said.

"We express our shock, sadness and solidarity with Iraqis and strongly condemn these cruel acts that affected innocent people, stole the happiness of preparing to celebrate Eid al-Fitr and converted it to a national mourning," he said.

The patriarch said terrorism had nothing to do with religion, "but may be linked to political games that allow killing of Muslims, Christians, Mandaeans and Yezidis as 'infidels,'" the patriarch said.

He added that "everyone should understand that killing innocent people leads to hell rather than to heaven."

"Our prayers this evening will help us learn lessons from this tragedy and find effective and permanent solutions," he said. "If the government was coherent and politicians worked as one team, ISIS wouldn't be able to commit these crimes; tamper with the country's security and stability, killing thousands of innocent people; displace millions; and destroy the Iraqi national fabric and peaceful co-existence."

In central Africa, a cathedral shelters Muslims amid sectarian violence