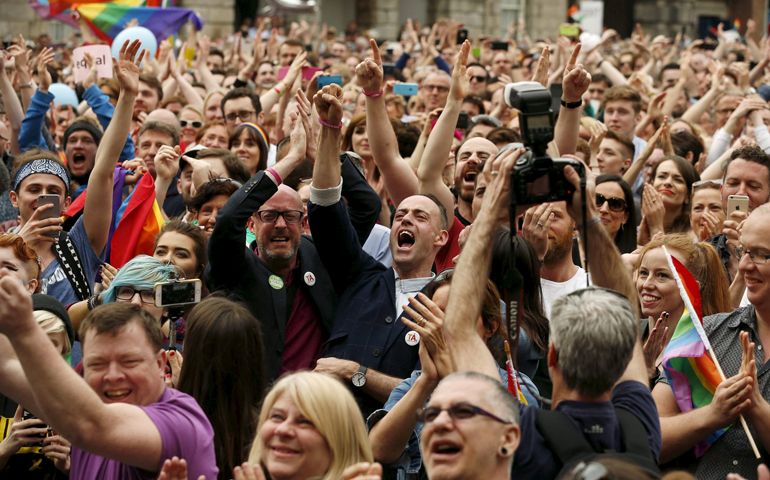 People in Dublin react to Ireland's vote in favor of allowing same-sex marriage May 23. (CNS/Reuters/Cathal McNaughton)

Dublin — Catholic Ireland has become the first country in the world to introduce gay marriage by popular vote, with 62 percent of the electorate voting "Yes" in a referendum Friday approving same-sex marriage.

The vote was a "reality check" for the Catholic church, the archbishop of Dublin said.

The Irish government has said legislation to give effect to the referendum will be enacted by the end of July. The constitution will be amended to include the following sentence in Article 41: "Marriage may be contracted in accordance with law by two persons without distinction as to their sex." The country's first gay marriages are likely to take place within months.

More people voted in the marriage referendum than in any previous referendum in the history of the Irish state, with an overall turnout of 60.5 percent representing a total poll of 1,935,907.

1.2 million people voted on Friday in favor of amending the constitution to allow same-sex couples to marry, with 734,300 opposed to the proposal.

The issue was one that captured the interest of young voters, with thousands registering to vote for the first time and hundreds even flying in from the United Kingdom, the United States and Australia to make their voices heard.

This was despite warnings from the "No" campaign that changing the constitution would result in de-gendered marriage. As gay blogger Paddy Manning, who supported a "No" vote, warned, it will make it "impossible to legally privilege a married mother-father couple for an adoptive child, deliberately ignoring what is best for the child."

"We are having [an] adult-centric debate on marriage when we should be putting children, their rights, needs, and outcomes at the centre of the discussion," he wrote.

Ireland traditionally has been a socially conservative and Catholic country where the Catholic bishops hold huge sway. As recently as 1995, a referendum legalizing divorce was carried by less than 10,000 votes.

The church's leadership seems paralyzed to stem the tide of "progressive" changes, undermined by its own clerical abuse scandals and cover-ups by those in authority. This episode in the Irish church's history has been documented by damning reports such as the Murphy Report (2009) and the Cloyne Report (2011).

Responding to the electorate's "Yes" to marriage equality, Archbishop Diarmuid Martin of Dublin, who championed a "No" vote, said the outcome was part of a social revolution.

"It is very clear that if this referendum is an affirmation of the views of young people," then the church needs a "reality check," he said.

"The church has a huge task in front of it to find the language to be able to talk to and get its message across to young people -- not just on this issue but in general," he said, noting that many of the young people who voted "Yes" were the product of 12 years of Catholic education.

For censured priest Fr. Tony Flannery, who voted "Yes," it was "particularly sad" to see the bishops in total opposition to a mass movement of the younger generation.

"The very people whom the church should be trying to listen to, and trying to learn a way of communicating effectively with, were the ones they were driving further away with all their pastorals [letters] in each diocese," he wrote on his blog.

He wrote that the Irish church needs a period of at least a generation in which it says nothing about sex to try and win back people's trust.

The defeat of the "No" side, according to Dublin-based priest Fr. Gerry O'Connor, has left the church "badly shaken and with a loss of credibility."

The Irish church "lost the working class decades ago because of an obsession with sexual morality and a harsh, judgmental understanding of what it means to be a struggling human being with a messy life," he said.

He said that recently, women, usually the backbone of any parish community, have also started to drift from the church, questioning the male dominance and their second-class status.

Outlining some of the lessons for the church from the referendum on his blog, Flannery wrote: "The day of doctrinaire Catholicism is over in this country. The people are no longer willing to listen to speeches and sermons on morality from the Church."

According to O'Connor, "the church is seen as irrelevant, judgmental and cruel when it comes to issues of sexuality. At baptism, people hear about their children being immersed into an ethic of love; as they grow older, they hear that some of these children have disordered sexual tendencies, and their desire to love and rejoice in married love is an act that disfigures God's dream. They cannot reconcile both."

"They will remain culturally associated to the church out of respect for the devotion of previous generations, but they will not become immersed, they will not blindly follow bishop's directives. It is a very damaging situation."

However, Augustinian Fr. Seamus Ahearne, who ministers in Finglas, one of the most disadvantaged areas of Dublin, was not as critical of the church's referendum stance, praising the leadership for speaking "openly and gently" and not "in a strident manner." Martin, he said, "was a model of balance and delicacy."

He was pragmatic about the victory of the "Yes" vote: "It isn't the death of life or family or marriage as we know it."

O'Connor, who is a member of the Association of Catholic Priests, said he believes that up to 1 in 3 clergy voted "Yes." One of those was Fr. Iggy O'Donovan, who ministers in Limerick.

"The people have spoken," O'Donovan said, "and the majority of the voters are Catholic, and they voted to reject what the hierarchy told them."

O'Donovan, who expressed happiness with the outcome, said his concern is for the separation of church and state.

"The civil law of the land can no longer be determined by the hierarchy," he said. "Ironically, the outcome gives the church a chance to regroup and get the monkey of the state off their back."

Referring to the recent veiled threat by the bishops to withdraw Catholic priests as civil solemnizers, a role they have fulfilled up to now as civil and church ceremonies overlapped, O'Donovan said he was in favor of the church only carrying out church weddings.

Asked about the possible impact of the referendum result on Catholic organizations such as the Catholic marriage support group Accord, whose funding the government slashed ahead of the vote, O'Donovan responded: "If Accord wants to push Catholic marriage, I support it because I believe in Catholic marriage. But if it comes at the price that you have to compromise your principles, then you don't take the money. In other words, you stand on your own two feet. Accord doesn't need to be propped up by the state."

O'Donovan said he believes the intervention of the former president of Ireland, Mary McAleese, "was crucial" in swaying ordinary voters.

The former president gave a significant address to an LGBT event in Dublin days ahead of Friday's vote, calling on families across Ireland to vote "Yes."

Referring to the experience of her son, Justin, who is gay, McAleese said: "We who are parents, brothers and sisters, colleagues and friends of Ireland's gay citizens know how they have suffered because of second-class citizenship."

But Breda O'Brien, an Irish Times columnist and spokesperson for the Iona Institute, wrote in a column for the newspaper that surrogacy, which some gay couples will have to turn to in order to have a family, will produce a new group of second-class citizens. She said the lessons of the adoptions scandals have not been learned.

"We have damaged irreparably the connection between marriage and a child's right to know and be cared for by the two people who each give them half of their biological, social and familial identity," she wrote.

Archbishop Chaput blasts Vatican debate on family, says 'confusion is of the devil'