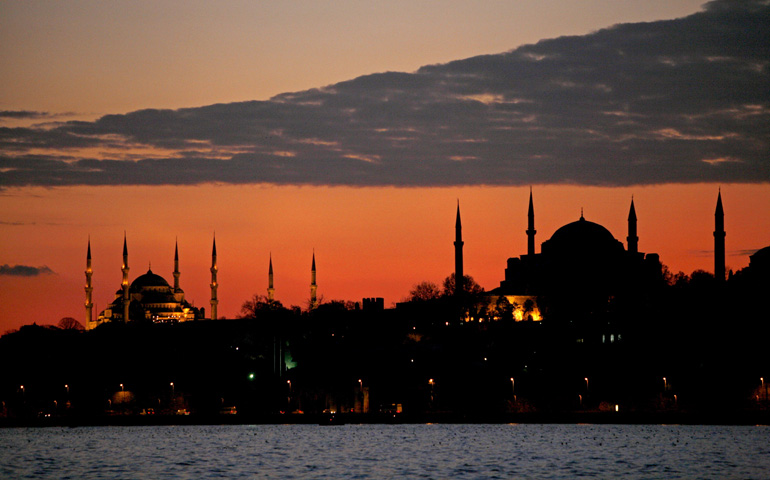 The Blue Mosque, left, and the Hagia Sophia Museum, right, in Istanbul. Pope Francis plans to visit both landmarks during his Nov. 28-30 trip to Turkey. (CNS/EPA/Tolga Bozoglu)

Almost every papal trip abroad is a complex mix of the religious and political, and that will be especially true of Pope Francis' Nov. 28-30 visit to Turkey.

Given the country's crucial geographic position straddling Europe and Asia, its historic importance for both Christianity and Islam and the wars now raging in neighboring Syria and Iraq, Francis will have to address a variety of urgent topics during his three-day visit. Here are five of the biggest issues that await him.

Like his predecessors Blessed Paul VI, St. John Paul II and Pope Benedict XVI, Francis will visit Turkey on Nov. 30, the feast of St. Andrew, patron saint of the Ecumenical Patriarchate of Constantinople, in what is today Istanbul. His primary reason for visiting will be to strengthen ties with the Ecumenical Patriarch Bartholomew, considered first among equals by Orthodox bishops.

Francis already has a strong relationship with Bartholomew, having met with him several times at the Vatican and in Jerusalem. Yet this meeting could have special value, not only because of its location, but because it will come a little more than a month after a stressful incident in the Vatican's relations with the Russian Orthodox Church, which accounts for about 40 percent of the world's more than 225 million Orthodox Christians.

Metropolitan Hilarion of Volokolamsk, who serves as a kind of foreign minister for the Russian Orthodox patriarch of Moscow, attended the October Synod of Bishops on the family at the Vatican, where he used some of his floor time to complain about the position of Eastern Catholic leaders on the war in Eastern Ukraine, highlighting long-standing and persistent tensions between Catholicism and Orthodoxy along one of their major frontiers.

Francis has used dramatic words and gestures to show his desire for closer relations with the Islamic world. He has written that "authentic Islam and the proper reading of the Quran are opposed to every form of violence" and invited both Muslim and Jewish religious leaders to pray for peace in the Vatican Gardens. In April 2013, a few weeks after becoming pope, he washed the feet of two Muslims during a Holy Thursday liturgy at a juvenile detention center in Rome.

Turkey will be the fourth Muslim-majority land, and by far the largest, that Francis has visited since becoming pope. For nearly five centuries, until the abolition of the sultanate in 1922, the country's rulers claimed the role of caliph, leader of the world's Sunni's Muslims. While no one in Turkey can plausibly claim to speak on behalf of global Islam today, the country's heritage makes it a prominent platform from which to address the faith as a whole.

During the last papal visit to Turkey, in 2006, Benedict's moment of prayer in Istanbul's Blue Mosque went far to ease an international furor over his speech in Regensburg, Germany, in which he had quoted a medieval description of the teachings of Islam's prophet Muhammad as "evil and inhuman." Pope Francis will also go to the Blue Mosque for what the Vatican has described as a private visit with no plans for prayer.

Francis will meet Nov. 28 with Mehmet Gormez, head of Turkey's Presidency for Religious Affairs, called the Diyanet, which oversees Muslim worship and education in the country. In September, Gormez complained that the pope had not done enough to combat "violence and discrimination" against Muslims in the West, exemplified by a rising number of attacks on mosques in Germany.

"This won't be done by such things as washing a young girl's feet or arranging interreligious soccer games," Gormez said, referring to two of the pope's most prominent gestures toward interreligious harmony.

In his meeting with Gormez, Francis is likely to repeat his frequent call for European nations to welcome their rising number of immigrants, many of whom are Muslim.

The papal visit will be a natural occasion for leaders of Turkey's minuscule Christian population -- much less than 1 percent of a total of 76 million -- to repeat longstanding grievances over official and social discrimination. Bartholomew has long demanded the reopening of a Greek Orthodox seminary closed by the government in 1971.

Observers say official treatment of Christians has improved since the Justice and Development Party, originally of Islamic inspiration, took power in 2002. The government points to a 2011 decree returning state-confiscated property to various non-Muslim religious communities as an example of increased tolerance. To encourage the spirit of such moves, Francis could recall the five-century tradition of multiculturalism under the Ottoman Empire, a heritage that Turkish leaders today increasingly recall with pride.

The pope, who has not been timid about calling for greater religious freedom in the Islamic world, might ask for an end to social discrimination against Turkey's Christian citizens, who are still commonly regarded as foreigners by the Muslim majority population.

Pope Francis is almost certain to repeat earlier calls for the protection of Christians and other minorities in the war-torn countries of Syria and Iraq, both of which border Turkey. In August, the pope said the use of force by a coalition of countries could be justified to stop Islamic State fighters, whose persecution of minorities and videotaped decapitations of hostages have drawn expressions of outrage from all over the world.

Though it has condemned such acts of terrorism, Turkey has proven a somewhat ambivalent member of the anti-Islamic State coalition, among other reasons, because of the Turkish government's opposition to Kurdish nationalists and the Syrian Bashar al-Assad regime, both of which are fighting the Islamic State. The pope is likely to tread lightly if at all on such geopolitical calculations, but he is sure to praise Turkey for accepting a vast number of refugees from the wars -- as many as 1.6 million from Syria alone.

The pope's official agenda in Turkey does not include any meetings with refugees, but the Vatican spokesman, Jesuit Fr. Federico Lombardi, has said some refugees might be present Nov. 30 when the pope briefly meets students from Catholic schools in several Middle Eastern countries.