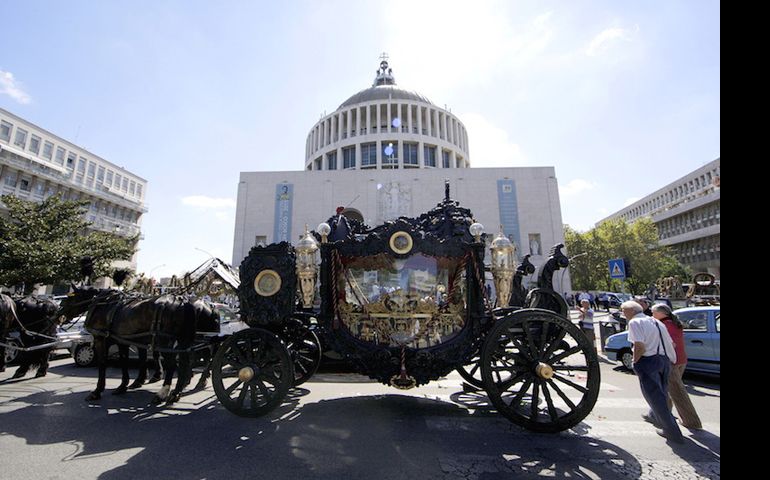 An ornate hearse pulled by six, black-plumed horses, carries the body of Vittorio Casamonicato by a Roman Catholic basilica in the Rome suburbs, where a funeral Mass was celebrated Aug. 20. Casamonica, 65, the head of a notorious Rome crime family, was given a lavish funeral on Thursday, with a helicopter dropping red rose petals on mourners and a brass band playing the theme tune from the “Godfather” movie. Picture taken August 20, 2015. (RNS/Stringer)

Now the Roman Catholic church is grappling with its role in the extravagant funeral as it wrestles with how it might continue to offer the sacraments to members of crime syndicates without appearing to condone their lifestyles.

During the Aug. 20 funeral, the walls of Rome’s San Giovanni Bosco Catholic Church were adorned with posters, reading “King of Rome” and “You have conquered Rome, now you will conquer heaven.”

In the days following the funeral, the church tried to distance itself from the elaborately orchestrated spectacle, with Auxiliary Bishop Giuseppe Mariante stating church officials did not know the ceremony would be accompanied by “Mafia propaganda.”

“Of course, if we had had the suspicion of a show of this type, we would have taken precautions,” Mariante was quoted as saying in L’Osservatore Romano, the Vatican’s semiofficial newspaper. “We absolutely would not have accepted conducting that funeral.”

The church does not deny last rites, including Communion, to Mafia members or other criminals if requested by relatives, said Bishop Vincenzo Bertolone of Catanzaro-Squillace in Italy’s southern Calabria region, the heartland of the powerful ‘Ndrangheta crime syndicate.

“But the directions for the ceremony ask that it is done in a simple way, without pomp, nor flowers, nor music, nor songs, nor beatifying commemorations,” Bertolone added.

Giancarlo Maria Bregantini, who for 13 years was bishop of Calabria’s Locri-Gerace Diocese, said that in his experience in southern Italy, Mafia bosses use funerals and processions to assert themselves and impose their power.

“In this sense the Church in Calabria has suffered and now has a lot to teach other churches,” he said.

Pope Francis has taken a strong line against the Mafia. During a visit to Calabria last year, he lambasted the Mafia for its “adoration of evil” and said mobsters had excommunicated themselves.

But the pontiff gave religious gangsters a glimmer of hope in February, saying criminals could be welcomed back into the Catholic Church if they repent.

“Open your hearts to the Lord, he said. “The Lord is waiting for you and the church will welcome you if your willingness to serve good is as clear and public as your choice to serve evil was.”

Judge slain in Sicily by mafiosi put on path to sainthood

Pope: Christians may be sinners, but they can't be corrupt, mafioso