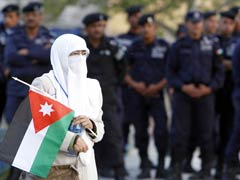 A woman holds the Jordanian flag as she walks past a line of police in Amman April 1 during a demonstration calling for reforms. (AFP/Khalil Mazraawi)

AMMAN, JORDAN -- Jordan, like Syria, had viewed itself as immune from the political ferment sweeping the Middle East, but in both cases those assumptions have proved to be wrong. Since January, a number of large demonstrations have been held in Jordan, with participants calling for constitutional reform, an end to corruption, and measures to curb rising food prices and unemployment. The broad-based protests have included Islamists, lawyers and trade unionists in addition to students.

“More interesting than the demonstrations is that the king has received a petition signed by many of the tribal leaders demanding an end to corruption, and specifically they were pointing a finger at his wife,” said Murhaf Jouejati, a professor of Middle East Studies at the National Defense University in Washington, D.C. “This is unprecedented. In Jordan, the monarch is the arbitrator of conflicts and one major pillar of his power are the tribes. When these tribes complain, he listens.”

No one has called for regime change in Jordan, where the monarch is often seen as the symbol of the state.

King Abdullah II ascended to the throne on the death of his father, King Hussein, in 2000. His image is everywhere in Jordan. On the highway, one can’t go for more than a few miles without seeing a new billboard portraying him in a different guise and garb -- as businessman, family man, soldier, military leader, sheik.

“The people love the king,” said Odeh Sawalha, a Madaba hotelier who, like other Jordanians, complained that the costs of living have become too high.

“Even the most extreme members of the opposition are not against the monarch. What they think should be discussed is the government and the corruption of the government during the last 10 years,” said Yusef Zreagat, a poet, writer and journalist in Jordan.

Queen Rania is accused by critics of promoting her family to positions of power and giving them gifts of land. The complaints highlight the sometimes touchy coexistence in Jordan between citizens from the East Bank of the Jordan River, tribespeople who can claim to be the country’s original inhabitants, and West Bankers, Palestinian refugees who have been absorbed into Jordanian society.

More than 60 percent of Jordanians are of Palestinian origin. Queen Rania, who is Palestinian, is an advocate for women’s rights and has argued in favor of women being able to pass on their citizenship to their children, a right currently denied them. Some East Bankers fear that should such a law pass, even more Palestinians would become Jordanian citizens, threatening East Bankers’ prerogatives. Currently, the Parliament is gerrymandered to give rural areas a greater voice than urban areas, one way the East Bankers have been able to retain their political power.

“There’s a sense on the part of the East Bankers that it’s their land and their country and the Palestinians should remember who they are, that they’re not equal,” said Edward Gnehm Jr., a former U.S. ambassador to Jordan and now a professor of international affairs at George Washington University in Washington, D.C. “It’s complicated because the Palestinians have always dominated the economic side of life. The East Bankers dominate the military and the intelligence service. Those are the two institutions often called the pillars of the monarchy.”

Many Jordanians had been closely watching the protests in other countries in the Arab world. “Day to day, hour to hour, they’re following what’s going on,” Zreagat said, observing that most Jordanians are supportive of people’s struggles against their respective governments in Egypt, Tunisia, Bahrain and Libya.

Now Jordanians are seeing a mushrooming protest movement at home. While Jordan has long been considered one of the freer and better-governed countries in the Middle East, unemployment is high in the debt-strapped, resource-scarce kingdom. The official unemployment rate is 12.9 percent; unofficial estimates suggest unemployment is 30 percent, with unemployment among those under 30 as high as 70 percent. Demonstrators are calling for the democratic election of the prime minister instead of his appointment by the king, curbs on the intelligence services, and movement to a more representative political system.