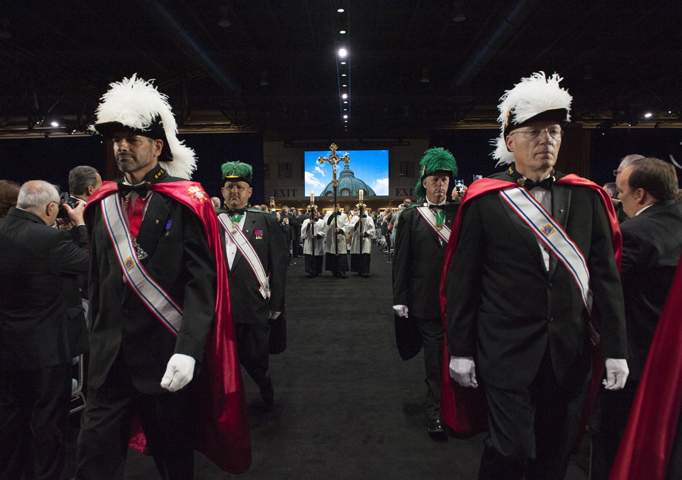 Members of the Knights of Columbus process during Mass Aug. 4 at their annual convention in Philadelphia. Approximately 2,000 knights from around the country and abroad gathered at the Pennsylvania Convention Center for the Catholic fraternal organization's 133rd Supreme Convention. (CNS photo/Matthew Barrick, Knights of Columbus)

To date, the Knights of Columbus has sent over $3 million to Iraq and Syria to aid Christian refugees.

Related: Read an interview with Chaldean Archbishop Bashar Matti Warda about the situation in Iraq.

In his remarks announcing the fund, Anderson cited action taken in 1926 by the Knights to support Catholics being persecuted in Mexico as a precedent for the establishment of the Christian Refugee Relief Fund. He also cited Pope Francis' reference to the "genocide" of Christians in the Middle East as motivation.

Anderson also referenced a recent New York Times story titled, "Is this the end of Christianity in the Middle East?" Prior to the 2003 U.S. invasion of Iraq, it is estimated that some one million Christians lived in Iraq out of a population of 25 million. Today, it is estimated that the number is approximately 300,000. In Mosul, Iraq's second largest city, there were 60,000 Christians prior to the U.S. invasion. Today, there are none.

"Today, I announce that the Knights of Columbus will redouble our efforts to bring aid to these victims in the Middle East," Anderson continued. "We will begin a new education campaign to expose the crimes against humanity that are being committed. It is time for a season of truth about what is happening to Christians and other minorities. It is a time for action."

As part of the education campaign, the Knights created a 30-second commercial. The Knights also created a website called "Christians at Risk."

NCR: What is the background of the establishment of the Christian Refugee Relief Fund?

Walther: This is a major priority of Pope Francis and it made sense for us to get involved in this particularly pressing humanitarian crisis. We've been doing this [supporting the Christians in Iraq and Syria] for about a year and have given more than $3 million in aid. This is very consistent with what we do: we identify a need and react to it.

What are the goals of the fund?

We are going to redouble our efforts, as it's clear that they need everything. There is no shortage of need. It is very important to help these people, survivors of Christian persecution in a way that is consistent with their dignity and to not just stabilize the situation, but to help keep people alive. These Christian people are a part of a 2,000 year history of Christianity in the region. This is a crisis of unbelievable in terms of severity. The least we can do is to provide humanitarian aid. It's literally doing the right thing.

The Knights have often worked in predominantly Catholic countries like Mexico, Philippines and Poland. Is this the first time the Knights are entering a country where the Christian population is tiny, a minority?

No. I recall our work in Indonesia and Japan following tsunamis where we sent substantial amounts of funds and humanitarian aid. We work in both Catholic and non-Catholic countries. We are doing things around the world. Other examples are our work in Kenya and Uganda with children suffering from AIDS, where they have little-to-nothing. Some have lost parents to the disease. In Haiti, we assisted a thousand kids with amputations and partnered with Miami, Fla.-based Project Medishare.

In Iraq and Syria, are you working with other organizations besides the archbishops and the archdioceses?

The local bishops and dioceses have had a long-standing orientation towards charity. We have also partnered with the Vatican. We are working with a medical clinic in Erbil that is run by a Slovakia Catholic university that has been in existence for a while. As time goes on, we'll identify partners who can solve certain problems and that have local expertise.

The remarks by Supreme Knight Carl Anderson were notable for such passionate and dramatic language like "The blood of these martyrs cries out to heaven for justice. And the blood of these martyrs cries out to you and to me for help." Anderson was also critical of the current U.S. government in his remarks. Yet, in 2003 when Pope John Paul II sent a special emissary, Cardinal Pio Laghi, to President George W. Bush, pleading that the president not invade Iraq because death, destruction, chaos and slaughter of innocents, including the Christian minority, was so clearly anticipated, where was Anderson and the Knights of Columbus in supporting Pope John Paul II in publicly denouncing Bush's invasion of Iraq?

Our program of humanitarian aid is directly responding to Pope Francis' request for assistance to persecuted Christians in the region, and his reference to this situation as genocide. The Knights of Columbus took no position on the issue of the Iraq war in 2003 or on the many subsequent military actions conducted over the past decade.

[Tom Gallagher is a regular contributor to the NCR and writer of the Mission Management column. He has been a member of the Knights of Columbus since the mid-1980s and founded the Knights of Columbus Council #9542 at his alma mater, The Catholic University of America, and later served as a district deputy overseeing the Washington, D.C., college councils. He is a member of Greenwich, Conn., Council #39. His article titled, "We Are All Called to be Missionaries of Charity," a reflection on his work on behalf of Blessed Teresa of Calcutta's religious order, the Missionaries of Charity, appeared in the Knights of Columbus magazine, Columbia, in 2006.]