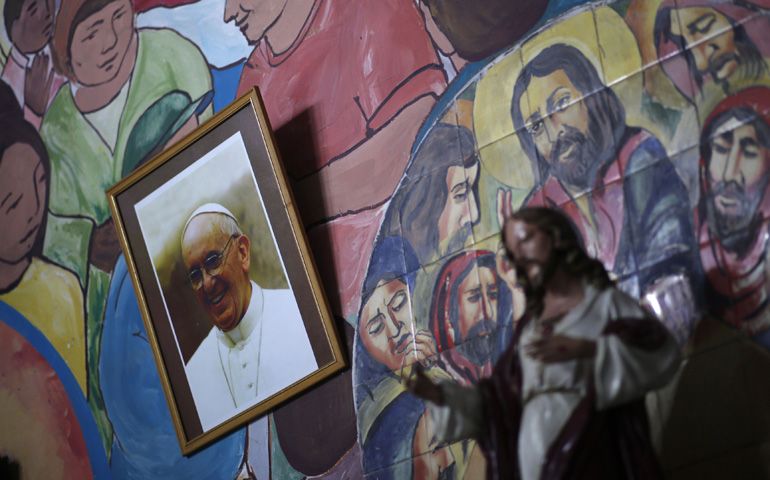 A picture of Pope Francis is seen at the altar of the Virgen de Caacupé Catholic Church during Good Friday celebrations in a Buenos Aires slum April 18, 2014, in Argentina. (Reuters/Marcos Brindicci)

One of the untold stories behind the election of Pope Francis in March 2013 was the emergence of Latin America as the new source church for global Catholicism. The cardinals didn't just elect the man but a program, one that had found expression, above all, in the great document produced by the Latin American bishops in Aparecida, Brazil, in May 2007. The document's principal author was the then-cardinal archbishop of Buenos Aires, Argentina.

Just as the church in Spain and Italy was the source for the Counter-Reformation, and the church of France and Germany the source for the Second Vatican Council, Latin America is now the wellspring of a new era of church reform. If Francis perplexes Europeans and North Americans long accustomed to thinking in liberal-conservative terms, it is because he uses a lens and a language that come from outside those categories.

For a recent example, consider his remarks in January on birth control that ended being drowned, in the reporting of the interview aboard the papal plane back from Manila, Philippines, by his "rabbits" remark. The remarkable thing was Francis' articulation of Pope Paul VI's opposition to artificial contraception in terms of a bravely prophetic stance on behalf of the poor of the world against the powers of the age, driven by neo-Malthusian and eugenic assumptions that poverty is a consequence of population.

Liberals in the North, who both inside and outside the church have seen this as an issue of personal autonomy rather than an anticolonial defense of the rights of the poor, were taken aback. But so too were conservatives, accustomed to defending Humanae Vitae in doctrinal terms.

Francis' words were wholly of a piece with the 1968 meeting of CELAM, the Latin American bishops' council, in Medellín, Colombia. The meeting had a profound impact on Jorge Mario Bergoglio, then finishing his Jesuit theology studies.

Medellín -- which famously articulated the "option for the poor" -- saw Humanae Vitae in terms of Rome coming to the aid of poor countries besieged by rich-world-funded development strategies and the imposition of an "eroticism of bourgeois civilization." This was the church speaking on behalf of the evangelized poor, defending their culture.

Similarly, more than 40 years later on the papal plane, Francis spoke of "ideological colonization," just as he had earlier told parents in Manila, "Peoples must not lose their freedom. A people has its culture, its history."

This is precisely the language that Bergoglio as provincial used in the 1970s with his fellow Jesuits, divided at the time by rival elite ideologies. He urged them to focus on the needs and values of what he called "God's holy faithful people," a term that mixed the Vatican II idea of the people of God with Medellín's option for the poor, yet was shaped by nationalism and culture, rather than the social sciences.

Although the term santo pueblo fiel de Dios was Bergoglio's, his thinking reflected a specifically Argentine expression of Latin American theology, identified above all with the theologians Lucio Gera and Rafael Tello. In essence, teología del pueblo, the theology of the people, rejected liberal and Marxist categories as imperialist instrumentalizing of the poor, and embraced seeing the people as subjects of history and culture, as both recipients and agents of evangelization.

Bergoglio would often say that the people have a way of seeing, an awareness, a hermeneutic. As he told the Jesuits in 1980: "The first question any pastor seeking to reform structures [of injustice] must ask is: What is my people asking of me? What is it calling on me to do? And then he must dare to listen."

This faith in history and culture, rather than in social sciences and political revolution, was a major dividing line between the Argentine version of liberation theology and the better-known Central American and Andean version. It was also the source of contention between the "nationalist" bergoglianos and the "liberal" anti-bergoglianos within the Argentine Jesuit province.

Yet while Bergoglio was eventually displaced within the Jesuits, it was the teología del pueblo that gradually won out, in Paul VI's 1975 Evangelii Nuntiandi -- a document strongly influenced by Gera and Tello, and foundational for Latin American churchmen of Bergoglio's generation -- and at the CELAM meeting four years later in Puebla, Mexico.

For the people theologians, the liberation project is not one of the seizure of the state by revolution, but the nationalist Catholic one of people-building, in which God is calling forth his people into a new birth of justice, protected and encouraged by a church that looks firstly to the poor and to the margins.

A key figure for Bergoglio's articulation of this people-building idea over many years was his Uruguayan philosopher friend Alberto Methol Ferré. Possibly the greatest Latin American lay Catholic intellectual of the 20th century, Methol Ferré spent most of his life convinced that Latin America had been moving from being a "reflection church" -- one that echoed Europe -- to a "source church" that would in time invigorate the universal church.

He saw the retreat of first Marxism and later neoliberalism in Latin America as opening up a new era for the people finally to take the stage. That process had, however, been retarded, both by the takeover of Latin American theology on the left and by the centralism of the Vatican under Pope John Paul II.

Methol Ferré and Bergoglio in 2005 believed that Latin America's moment had not yet come; both believed Cardinal Joseph Ratzinger should be pope. That was partly why Bergoglio resisted the attempt by a group of cardinals to elect him in that conclave.

But after 2005, it began to be clear that the hour was at hand. "In the next two decades Latin America will play a key role in the great battles which are taking shape in the twenty-first century," Bergoglio wrote in the prologue to a book that came out that year.

In Lima, Peru, to commemorate the 50th anniversary of the founding of CELAM, he said it was time for a continent that included half of the world's Catholics "to lend a service to the universal church," to share the gifts the Holy Spirit had showered on its people.

First, however, the Latin American church had to gather again. Methol Ferré was too ill to attend Aparecida, and died two years later. But like Moses on Mount Nebo glimpsing the Promised Land, he lived to see it happen. In his Latin America in the Twenty-First Century, the philosopher had argued that Pope Benedict XVI's election would usher in a new spring of Latin American Catholic thinking, because as Ratzinger he had deeply engaged with its theology in preparing his famous instructions on liberation theology.

Indeed, among Ratzinger's first moves was to give permission for the CELAM meeting at Aparecida, which the outgoing secretary of state, Cardinal Angelo Sodano, had long blocked. On the flight from São Paulo, Brazil, to the Aparecida shrine, Benedict said: "I am convinced that from here will be decided -- at least in part, but a fundamental part -- the future of the Catholic church."

In his homily at a huge Mass in the shrine after Benedict's departure, Bergoglio used a striking metaphor when he spoke for the first time (at least in a major public arena) of las periferias existenciales, the existential margins. The phrase struck many chords. It suggested not just the slums, but a world of vulnerability and fragility, a place of suffering and longing and poverty, yet also -- because of Christ's proximity -- of joy and hope.

Bergoglio was elected by his fellow bishops to take charge of the redaction of the concluding document, which is shot through with teología del pueblo concepts.

In its vision and vigor, its fierce advocacy of the poor and its missionary spirituality, its bold proclamation of the birth of a new springtime of faith, Aparecida was now the program, the key to a major new effort of evangelization in Latin America linked, inextricably, to the liberation of a people. Nowhere else in the world was there anything to compare with it. It was the expression of a new maturity, of a local church come of age.

That is why it is so poignant that Benedict, unsteady on his feet in Mexico and thinking ahead to Brazil, decided while in Latin America in March 2012 to stand down a year later. It is hard not to see an exhausted European church standing back to allow the vigorous church of Latin America to take its place.

That a transition was taking place was obvious at the synod on the new evangelization of October that year. The churches of Europe and the U.S. were anxious, turned in on themselves, focused on what they lacked. Why was it that an Asian or Middle Eastern bishop whose flock was being killed and bombed could be so hopeful and joyful, yet bishops in a church where nobody suffered that real kind of persecution spoke as if Christian civilization faced annihilation?

"At the synod, the wind blew from the south," an Argentine theologian sent by Bergoglio told Vatican Radio.

Bergoglio saw it too. The rich-world church was blaming the culture for its decline. Yet the first obstacle was not the culture, but a church that had grown worldly and self-referential, that no longer evangelized and allowed the living water to go stale. The problem, Bergoglio told a group of Caritas workers on retreat, was that "we have Jesus tied up in the sacristy."

Only three months later, he told the cardinals that it sometimes seemed as if Jesus was not so much knocking at the door to come in, but was on the inside, asking to be let out. He offered them a choice between a church geared to mission and mercy, or a paralyzed church that had grown distant and stale.

Two years ago in the Sistine Chapel, the cardinals chose not just the man, but the program. Whether or not they were aware of it, in electing Francis they were allowing the fire lit at Aparecida to be brought to Rome, to shake up the Vatican and to light up the universal church.

Our eyes are still adjusting.

[Austen Ivereigh is author of The Great Reformer: Francis and the Making of a Radical Pope, which was reviewed in NCR.]

Mass is a time of silence and prayer, not idle chitchat, pope says