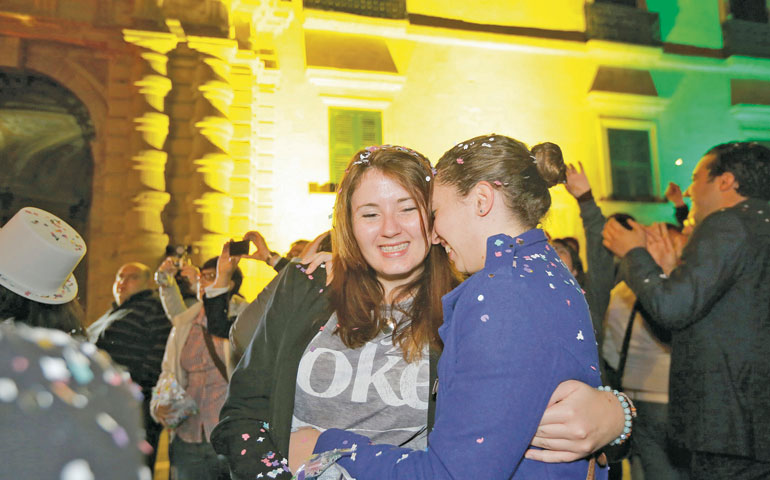 Malta's bishops were "surprised" but reassured by the findings of the survey of Catholics they conducted in preparation for October's world Synod of Bishops on the family, according to a report in The Sunday Times of Malta.

The results show that 70 percent of Maltese accept and live by the church's teaching about family life and try to follow them, though 44.3 percent find them difficult to follow, the Times reported April 20.

"This is a picture of reality and I have to admit that I place myself among the 44.3 per cent," Bishop Mario Grech of Gozo told the Times.

The newspaper got a preview of the results shortly before the bishops sent the report to the Vatican.

The bishops gave the survey supplied by the Vatican's Secretariat on the Synod to a church-based research institute, Discern, to simplify the questions and distribute the survey through print and online. They received 7,000 responses, according to the Times, but no demographic data was reported.

The major results, according to the Times are:

Malta is a 122-square-mile island nation with a population of about 412,000, of which 98 percent are Roman Catholic, the nation's official religion. It has two episcopal sees, and three active bishops: Grech, Archbishop Paul Cremona of Malta and Auxiliary Bishop Charles Scicluna of Malta. The two dioceses have a total of about 80 parishes, 900 priests and 1,000 women religious.

Grech, president of the bishops' conference, told the Times that the results surprised him and fellow bishops, saying, "We were expecting the worst," but these "figures are consoling."

Survey results released by bishops in Germany, Switzerland and parts of the United States found wide disregard for the church's traditional teaching on family issues, particularly its ban on artificial birth control and refusing the sacraments to divorced and remarried couples.

"When you observe the changes the family is experiencing in Europe, the survey shows our family is still whole," Grech said.

"But it's not time for complacency," he added. "We have to remain prudent in the face of the cultural tsunami the society is facing, from divorce to same-sex unions, which will affect individuals and families. ... We have to remain hands-on and vigilant to continue offering a good service and improving."

Malta's church leadership waged a fierce but losing battle against legalizing divorce a couple years ago and were outspoken against adoptions by same-sex couples last year, when a civil union law was under discussion. As time for parliament to vote on the civil union measure came in mid-April, they were much more subdued. The law, which makes civil unions between same-sex couples legal and allows same-sex couples to adopt children, passed comfortably.

The church is acknowledging that Malta is becoming a "more pluralist society," Scicluna told Malta Today in an interview published April 23. Scicluna, who took a very public stand against gay adoption, told Malta Today that the bishops' rather muted statement on the civil union legislation reflected a "cautious, respectful" position adopted by the Malta archdiocese.

The bishops "must be aware of the new generation," he said.

"I think it's a good development: There is a distinction between political and religious leadership," Scicluna said. "But this doesn't mean a total separation, because conscience should be informed not only by religious motivations, but by human reason. I think it is a development that us [sic] bishops are respecting the autonomy of church and state."

[Dennis Coday is NCR editor. His email is dcoday@ncronline.org.]

A version of this story appeared in the May 9-22, 2014 print issue under the headline: Malta bishops release family synod survey findings.