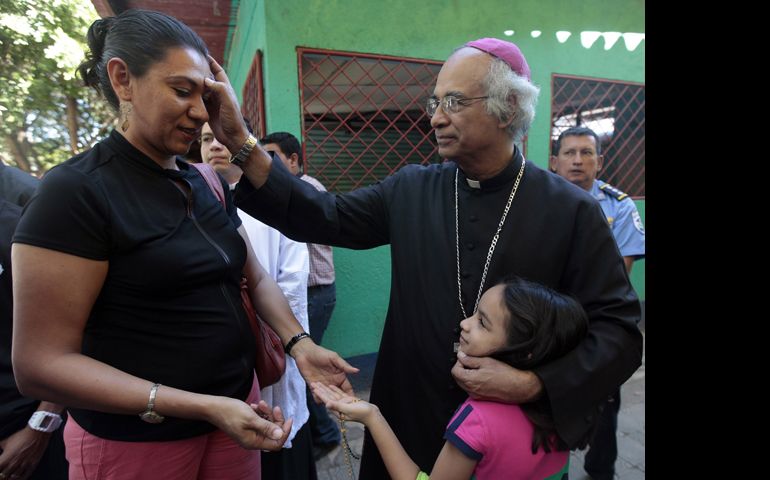 Santo Domingo, Dominican Republic — Archbishop Leopoldo Brenes Solorzano of Managua, Nicaragua, joined his mother to listen to the public announcement that Pope Francis was elevating him to the College of Cardinals.

Brenes told reporters Jan. 12 he "wanted to cry and to be grateful to the Virgin, because I always want to stay true to my beginnings, my simple beginnings."

"I want to continue being the pastor that you know," he said, hours after it was announced Pope Francis selected him and 18 others. They will be elevated in a consistory at the Vatican Feb. 22.

She said her son had always been preparing for a life in the church: At age 3 he would tell her, "I'm a father," even before he could pronounce "padre" correctly.

Nicaraguan church leaders say a simple, humble approach and a dedication to working beside the poor have defined the work of Brenes, 64.

"Certainly this bishop has been an advocate for the poor for his entire career," said Hugh Aprile, country representative in Nicaragua for the U.S. bishops' Catholic Relief Services, which has worked with Brenes for two decades. "He is someone who has put development at the forefront of his career."

The Nicaraguan bishops' conference said the archbishop's elevation to cardinal "is reason for joy for all of the dioceses in Nicaragua."

"We should endeavor to live with more commitment to the Gospel of Jesus Christ ... to be faithful sons of the church and every day renew our lifelong commitment to missionary work," it said in a statement.

The World Bank says Nicaragua, a country of 6 million people, the majority of whom identify as Catholic, is the poorest country in Central America.

After 16 years out of power, the Marxist Sandinista rebel leader, Daniel Ortega, is serving his third term as president. A recent proposal to amend the constitution to allow him to serve an indefinite number of terms drew criticism from the Catholic bishops, including Brenes.

The bishops' conference said the changes were floated "at a moment in which the separation of state powers do not exist. We've continued to suffer through experiences of electoral irregularities and violations of the constitution that have altered the constitutional and democratic path in our country."

Yet Brenes did not mention politics as a reason for being elevated. Instead, he said Pope Francis was recognizing his pastoral approach.

"For me, what's important is being close to the people, living in the parish. And I think that the Holy Father knows a little about my work here in the archdioceses and also in Central America," he said.

Born in Managua, Brenes attended Catholic primary and secondary schools and entered the seminary at age 16. He studied sacred theology at the Pontifical Lateran University in Rome and was ordained in 1974 by his predecessor, then-Archbishop Miguel Obando Bravo.

Solorzano told El Nuevo Diario that, several years ago, Obando Bravo presented his successor with a scarlet cassock, worn by cardinals, and told him, "Take this in case they someday make you cardinal."