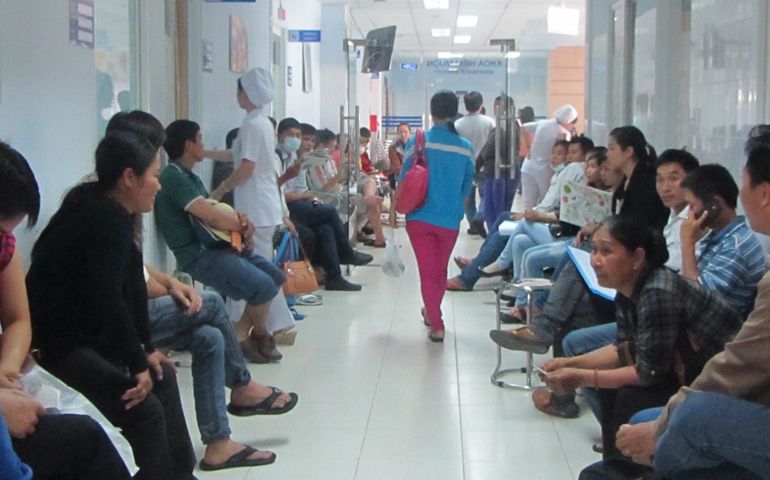 Ho Chi Minh City, Vietnam — Agnes Pham Thi Dung is treated like an enemy by her husband in their ramshackle house. Her husband, a motorbike taxi driver, is verbally abusive and spends lots of money drinking. She suffers through his angry shouts and uncontrolled violence on a daily basis.

"I find my 36-year marriage to be deeply unhappy because I was not able to bear a child," said Dung, 59, who earns her living as a manual worker. She said they used to run a small restaurant together, but her spouse, who worked hard and respected her then, abandoned the business. She said he since has grown weary of his life in large part because of their neighbors, who scorn them for being a childless couple.

She said she does not know which one, he or she, is unable to have a baby.

"I am innocent, but I can do nothing to change my fate," Dung said.

However, in Vietnam, even childless women who are well off suffer a similar fate.

For the past decade, Therese Nguyen Thi Van has made several failed attempts to have a baby through in vitro fertilization.

"I fell into a black depression after the doctors concluded that I could not get pregnant like other women," Van said.

The 35-year-old, who works for a PR agency in Ho Chi Minh City, said she has thought about leaving, going somewhere she is not known, to escape from the deep-rooted prejudices held by her husband's relatives and neighbors.

"They shout at me, saying I am wicked, and even accuse my parents of not having lived virtuous lives as the reason why I can bear no children," she said. Tears rolled down her face.

Vietnamese people hold beliefs about causality, that the good or unfortunate things that happen to people are a result of the good or evil deeds they have done in the past.

Van's husband's Buddhist parents put pressure on her to have a baby, saying, "If you are unable to have children yourself, let your husband marry another woman," Van said. Her husband is their only child and is traditionally expected to have children, particularly sons, to continue the family line.

Last month, Van's in-laws arranged for one of their female relatives to have a baby for her -- without asking for her opinion.

In June, Vietnam approved the amended Marriage and Family Law, which allows surrogacy for humane purposes. Most Vietnamese who seek this service do so quietly and often go to Thailand for the procedures.

Van, whose name has been changed to protect her identity, said she talked to her parish priest about her situation but found his advice to be useless.

Since surrogacy is against canon law, the priest told her to prevent her in-laws from having their relative give birth to a baby for her. The priest also warned that if Van fails to prevent their actions, she will be committing a crime as an accessory.

The Vietnamese Ministry of Health says more than 1 million couples suffer from infertility.

Childless couples are considered "miserable ones" in this deeply conservative society, which is still dominated by Confucian social mores. Men are always respected more than women. Adoption is not a common practice.

Having no children is one of major reasons couples here apply for divorce. Many childless couples save their marriages from breaking down by seeking assisted reproductive technologies, commonly in vitro fertilization, to have a baby.

A priest who does regular missions at parishes in Vietnam's four central dioceses said there are no official divorce statistics of childless Catholics. He estimates there are 50 childless marriages that end in divorce per year at the parishes he works with.

The priest, who asked not to be named, said the real number of divorces is much higher because divorced people move to places where they are not already known and sever contact with the church that bans them from divorce.

Another priest, Fr. Peter Phan Xuan Thanh, head of the deanery of Hue City, said a Catholic couple he knows of has recently petitioned the city's court for divorce after being married for years without having a child.

He expressed his concern that childless couples are at high risk of divorce; unable to bear prejudice from their communities, they find it preferable to end their marriages instead.

Some priests NCR spoke with said they advise childless couples to obey the canon law and believe their suffering is sent by Providence. They also encourage them to adopt.

They said childless couples have full freedom to decide to observe the canon law or to apply assisted reproductive technologies, calling it "a matter of individual conscience."

However, they also said few people seek advice from priests before they choose assisted reproductive technologies to have babies.

"My home life is lonely and I have to save money to pay the surrogate mother after she gives birth to a baby," Van said of her situation. "I have no choice."

[Joachim Pham is NCR correspondent based in Vietnam.]