Motivated by 'what it means to be a priest' 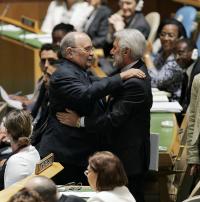 NCR correspondent Patricia Lefevere recently sat down with Miguel d’Escoto Brockmann in his office at U.N. headquarters in New York, where the Maryknoll priest and former foreign minister of Nicaragua serves as president of the U.N. General Assembly. Highlights of their conversation follow.

Were you surprised you were chosen and elected unanimously?

I was astonished. I didn’t know I was a candidate. I said: “You can’t do this! Just look at me! I’m so decrepit.” What if I should fall or faint? I have Ménière’s disease, you know. … I’ve never in my life campaigned for any post. I’m not a politician, but this is a political role. I didn’t want to withdraw my name and embarrass the [outgoing U.N. General Assembly] president. I began to pray in order to discern what Our Lord wants me to do.

How do you see your role here? What do you hope to achieve?

I have two goals. I want to put the U.N. on track toward profound democratization, and I plan to convene a high-level U.N. meeting in June on the global financial crisis and its impact on development. I’m asking God to enlighten me to help make it a success.

What do you mean by profound democratization? Aren’t most of the world’s nations already seated in the General Assembly?

Yes, seated, but it’s been difficult for many of them to be heard. There have always been states that have been accustomed to calling the shots, to treating the rest of the international community as marginal or unimportant. But the problems we face are no longer binational, not even regional. They’re global. All states must be included in solving them.

Which problems have been most prominent on your watch?

Daily at the U.N. there are converging crises exploding in front of our faces. Today we meet about world hunger and the issue of global food security, but the food question is tied to the economic crisis, energy crisis and the water crisis, which is a part of climate change. These multi-crises converge, interact, fuel and aggravate each other.

What about arms control and disarmament? The Security Council met recently over North Korea’s rocket launch. Will the General Assembly take up these issues?

The only way to stop the proliferation and threat of nuclear war is to have zero nuclear weapons. Nuclear war could happen accidentally and lead to a nuclear holocaust.

These countries that are developing nuclear warheads want them because they see other nations with them. If no nation had nuclear arms, there would be less motivation to acquire these deadly armaments. I believe the General Assembly will have a conference on disarmament later in the summer.

I notice portraits of Mahatma Gandhi, Dorothy Day and Martin Luther King behind your desk. Do these figures speak to you in your role here?

Yes, their courage, perseverance and work for the poor inspire me greatly. You know I studied Gandhi over many years. He said real change occurs when we begin to do things less from our internal convictions and ethics, but because we discover there simply are no other alternatives. He really speaks to me in this current global economic meltdown.

This crisis was not necessary. It was totally fueled by greed and excessive risk-taking. We’ve enthroned greed and betrayed the basic principles that should govern human behavior. The crisis is a threat to all, including the U.N. But it could also be an opportunity if we all will be willing to move in a new and needed direction.

Many Americans, and other world citizens as well, view the U.N. as at best a “talk shop,” at worse an ineffectual giant. Aren’t these perspectives pretty accurate? Just how does a 192-member body deal with the interwoven crises you’ve described?

We’re lucky here to provide a venue for so many knowledge holders. What goes on here and is learned here proceeds from a dialogue of wisdoms. Take today: We have agro-ecologists, Third World scientists, economists, small-scale family farmers, our indigenous brothers and sisters, the U.N. special rapporteur on the right to food, my senior advisor for food policy and sustainable development, and experts from U.N. food agencies in Rome. They’re all together here meeting about a problem that affects a billion people on earth. They’re all stakeholders, both as producers and because those they represent constitute a big percentage of the world’s hungry people.

The U.N. took a dive in public opinion earlier this decade when it was unable to prevent the Bush administration from invading Iraq, a member state suspected of, but proven not to possess weapons of mass destruction. Do you expect the U.N.’s cachet to rise under the Obama government?

I value highly the American people who chose Barack Obama to lead them. I read The Audacity of Hope and was moved by it. Now I see him leading politically and morally. He is strengthening the hope that still lingers in people’s hearts.

Today I wrote a heartfelt letter to President Obama. I would like him to address the G-192, which is the most inclusive world body. I invited him to come soon. His coming now would augment the goodwill that already exists for him here.

A country that produced Dorothy Day and Martin Luther King deserves a leader like Barack Obama, but the whole world benefits too.

Padre Miguel, I’ve wanted to ask you this question for a quarter century. Were you on the tarmac at Managua Airport on March 4, 1983, when Pope John Paul II wagged his finger at Fr. Ernesto Cardenal, one of four priests -- yourself included -- who held positions in the Sandinista government over the objections of the Vatican?

No, I was at a ministerial meeting in India at the time. Otherwise I’m sure the pope would have scolded me too with his finger.

Are you now a priest in good standing? Could you give me Communion or hear my confession if I asked you to?

I have been suspended by the Vatican for almost three decades now. Some canonists and scholars have told me there has never before been a precedent for Rome’s going over the heads of the local bishop [of Esteli, Nicaragua] and the provincial [of Maryknoll]. By definition suspension is said to be a “remedial step.” I’ve been advised that my suspension is a clear abuse of authority and I should not heed it. But I don’t want to make a fuss or to protest. I know that only sin can separate me from God.

Do you still serve as a political adviser to President Daniel Ortega or are you on leave during your year at the U.N.?

No, I’m still an adviser. I talked to President Ortega last week and he will be coming here in a few weeks.

World | Motivated by 'what it means to be a priest'