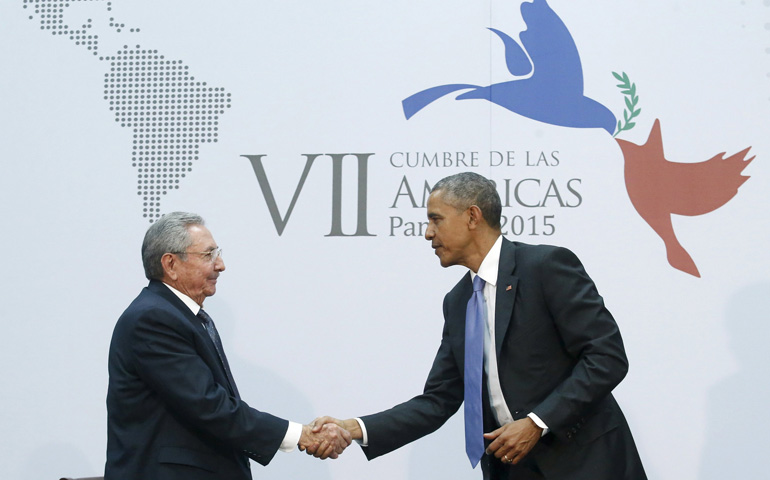 Cuba's President Raul Castro shakes hands with U.S. President Barack Obama as they hold a bilateral meeting Saturday during the seventh Summit of the Americas in Panama City. (CNS/Reuters/Jonathan Ernst)

An hourlong meeting Saturday between U.S. President Barack Obama and Cuban President Raul Castro marked the first such personal encounter between the leaders of the two neighboring countries since 1958.

The session held during the Summit on the Americas, in which Cuba participated for the first time, was the most visible step toward ending a half century of strained relations dating back to the Cuban revolution.

Cardinal Pietro Parolin, Vatican secretary of state, extended Pope Francis' greetings to the gathering. His presence at the summit served as a reminder of the pope's hand in encouraging Obama and Castro to move toward restoring diplomatic relations and ending the decadeslong U.S. embargo of the nation that sits 90 miles off the tip of Key West, Fla.

A day earlier, the highest-level official meeting between Cuban and U.S. representatives in decades took place in Panama City as U.S. Secretary of State John Kerry met with Cuban Foreign Minister Bruno Rodriguez in what the State Department described as a lengthy and productive session.

In remarks to reporters Saturday, Obama said he and Castro have concluded "that we can disagree with a spirit of respect and civility." Over time, he added, "it is possible for us to turn the page and develop a new relationship between our two countries."

Castro spoke at length in formal remarks at the summit, in part listing what Cubans have considered U.S. offenses against his country, but then agreeing with everything Obama had said. He said while the two nations have "agreed to disagree" sometimes, Cuba is willing to take up any topic of stress between the two countries, including human rights and press freedom.

Castro acknowledged that as president only since 2009, Obama had no role in the long history of strained U.S.-Cuba relations. "I apologize to him because President Obama had no responsibility for this."

Obama said the Cold War "has been over for a long time," and that "I'm not interested in having battles frankly that started before I was born."

Obama and Castro in December simultaneously announced the two estranged nations would re-establish official diplomatic relations. President Dwight Eisenhower in 1960 first imposed a trade embargo on Cuba in reaction to the repression and human rights abuses which followed the Marxist revolution that put Fidel Castro in power the previous year. President John F. Kennedy expanded the embargo and subsequent presidents maintained it.

In 2009, Obama became the first president to substantially loosen restrictions, making it easier for Americans to travel to Cuba for family and cultural visits and allowing U.S. citizens to send more money to their relatives there. Cuba, for its part, has in the last few years begun to allow privately owned businesses, now permits people to own, buy and sell their homes and automobiles, and stopped requiring permission from the government to leave the country.

In announcing the moves toward normalized relations in December, Castro and Obama acknowledged the role the Vatican had played in what turned out to have been 18 months of secret negotiations.

Obama said during the Panama summit that he had a State Department report awaiting his return to Washington about whether the U.S. should remove Cuba from its list of countries that sponsor terrorism.

Removing Cuba from the list would make it easier for Cuba to participate in certain types of financial transactions and eliminate a status Cubans see as an unfair blot against the country.

Although Obama can officially renew diplomatic relations, reopen the U.S. Embassy in Havana and remove Cuba from the list of terrorism sponsors, only Congress can end the trade embargo that blocks most financial transactions between the two countries and makes it illegal for U.S. citizens to travel there for business or tourism.