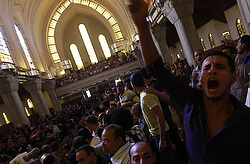 A man chants pro-Christian slogans during a funeral at Abassaiya Orthodox Cathedral in Cairo on Monday. At least 26 people, mostly Christians, were killed Sunday when troops broke up a peaceful protest against an attack on a church in southern Egypt. (CNS photo/Amr Abdallah Dalsh, Reuters)

CAIRO — Orthodox Pope Shenouda III declared three days of mourning, fasting and prayer for victims of peaceful protests that turned violent, and church and government leaders called for Egypt to reaffirm its commitment to religious freedom.

At least 26 people – mostly Christian – were killed and almost 500 were injured Sunday as gangs armed with firebombs, sticks, swords and rocks attacked about 1,000 people staging a peaceful sit-in outside of a state television building. As the violence escalated, a speeding military vehicle mounted a sidewalk and rammed into a group of protesters, killing a number of them.

Witnesses said headless bodies lay in the street in the worst sectarian violence since the ousting of President Hosni Mubarak in the "Arab Spring" revolt earlier this year.

But several Catholic leaders said the problem had moved beyond sectarianism.

"The army and the police are confronting the Copts. This is the problem," Father Rafic Greiche, official spokesman for the Catholic Church in Egypt, said in a statement to the Catholic charity Aid to the Church in Need. "It is not a Christian-Muslim problem anymore. ... People – not just Christians but many Muslims, too – are frightened for the future of our country.

"We are accusing the army and the police who used vagabonds, a rabble force of street fighters, to attack the demonstrators," the priest said.

"They were armed with swords, sticks and stones – some of them had rifles, it seems," he said. "They did not have to use force. It was a peaceful demonstration."

Hardline Salafi Muslims have initiated violent protests against the construction of two churches in southern Egypt on the grounds that the building projects were illegal. Four churches have been subjected to arson attacks in as many months.

The Christian demonstrators were protesting one such attack on a Coptic Orthodox church and were seeking greater protection from the authorities.

Catholic Bishop Antonios Aziz Mina of Giza told Vatican Radio that Christians were asking to be able to live peacefully in their own country.

"If they (the police) had taken a position of being against those who destroyed the churches, we would never have gotten to this point," he said.

Cardinal Antonios Naguib, Coptic Catholic patriarch of Alexandria, told Vatican Radio the situation was provoked by outsiders and added that it was complex.

He said even the armed forces have a dilemma: Do they "face the people creating conflict by (using) force or act very cautiously, giving the impression they are slow and lack resolve?"

Under Mubarak, any permit to do with a church building – even repainting it – had to be signed by the former president. At least one priest recalled waiting more than 21 years for a permit and said that, even after a permit was granted, state or local officials could stop construction for "security issues."

Cardinal Naguib told the Italian bishops' news agency, SIR, that the "attacks by Islamists against Christian institutions continue always under the pretext that churches are being built without explicit official authorization, which still remains very difficult to get." He said it was hard to tell how Egypt's leaders viewed the treatment of Christians, because Shariah, or Islamic law, seemed to conflict with some previous declarations of intent.

He said Egyptian Christians have lived through similar situations.

"We will continue to do all we can, sustained by prayer and trust in God, and the spiritual and moral support of all Catholics, Christians and people of good will," he said.

Skirmishes in Cairo continued through Monday, with several hundred Christians pelting police officers with rocks outside the hospital were many of the victims were taken.

In a televised address Monday, Egyptian Prime Minister Essam Sharaf blamed the violence on foreign intervention and warned Egyptians that such actions would delay the country's transition to civilian rule.

Government leaders also weighed in on the violence.

"As the Egyptian people shape their future, the United States continues to believe that the rights of minorities – including Copts – must be respected, and that all people have the universal rights of peaceful protest and religious freedom," said statement from the White House on Monday.

US brother beatified on soccer fields of Guatemalan school he served

Dominican official to investigate claims of sexual abuse against nuncio