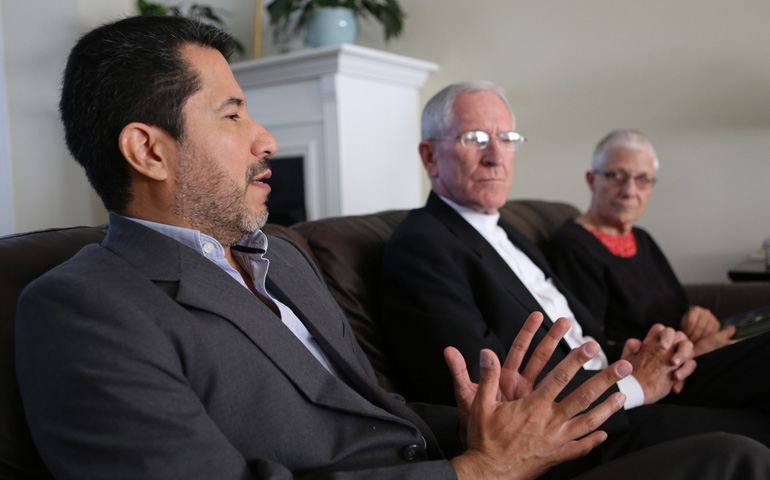 Expanded airstrikes on Islamic State positions in Syria serve as little more than a recruiting tool for the extremist group and place more innocent people in danger, the leadership of Pax Christi International said.

The three top leaders of the Catholic peace organization also called upon the world, particularly the United Nations, to work together to seek nonviolent alternatives to stop the Islamic State's expansion and influence in Iraq and Syria.

The Catholic peace leaders proposed alternatives to war such as wide-ranging diplomacy, including direct talks with Islamic State leaders, and economic actions aimed at limiting the group's access to millions of dollars in oil revenues that fund weapons purchases.

"We believe that especially the expansion of bombing is more likely to create significant recruiting bonanza for some of the extremist groups, ISIS included," Dennis told CNS.

"The Islamic State, ISIS, is very well funded and steps must be taken to identify the sources of their funding and to stop them," she said.

In the United States for a Pax Christi program on international peacemaking at St. Rose of Lima Parish in Gaithersburg, Md., Sept. 23, Dowling said the violence that began with the U.S.-led invasion of Iraq in 2003 has resulted years of and discord along religious and ethnic lines. He said little was done to include voices representing local and minority communities in planning for recovery and rebuilding after the invasion, which toppled Iraqi leader Saddam Hussein.

"Here we have a situation where going in there and investing so heavily in war and violence has not solved the situation. We are now reaping the fruits of the fact that there wasn't an inclusive political, social response," Dowling said.

"It's this inclusive dialogue and nonviolent way of bringing people together, of facilitating understanding, that's what has to be done. Otherwise, we simply perpetuate a situation where people's only thought is, 'We've been violated, so we will take revenge, and to restore our sense of dignity, we have to respond to violence done to us.'

"But that doesn't achieve anything either. So we've got to find other ways, nonviolent ways, inclusive ways," the bishop added.

Henriquez called for the United Nations to lead the way in finding a settlement to the crisis the Islamic State poses. "That has, to my understanding, not been totally explored," he said.

Dennis was among 53 religious leaders and organizations to urge President Barack Obama to seek a nonviolent response to the Islamic State incursion into Iraq. An Aug. 27 letter to the president cited a deep concern to protect people from violence, but that military action would compound the plight of average citizens in war-torn regions.

The letter outlined a several steps the United States and its partners could take including providing "robust" humanitarian assistance to those fleeing the violence; wider diplomatic efforts including involvement of the U.N.; seeking a political settlement to the crisis in Syria, where the Islamic State emerged; supporting community-based nonviolent resistance strategies; strengthening financial sanctions against the armed actors in the region; upholding an arms embargo on all parties in the conflict; investing in professionally trained unarmed civilian protection organizations; and supporting Iraqi civil society efforts to build peace, reconciliation and accountability at the community level.

Such efforts are among those being undertaken in parts of Africa and Asia to ease conflicts and improve understanding among varying ethnic and religious communities, leading to long-term prospects for peace because people's voices are being heard, the three leaders told CNS. Unfortunately, they said, such work gets little attention from governments or the media.

For true peace to be achieved, "it has to be, like in the church, through the principle of subsidiarity," Dowling said. "The issues have to be informed from the grassroots, as seen an analyzed by the affected people. The agents of transformation are not those at the top. They're the people engaged at the community level."

In Gaithersburg, Dowling told an audience of 75 people that his work for peace was influenced by his ministry as a young priest in a black township of South Africa. Seeing people struggle for basic human dignity shaped how he views the world and the need to seek peace from the bottom up rather than have it imposed by peace treaties that ignore or fail to promote justice among ethnic and religious communities.

He said he saw people facing the same challenges when he visited South Sudan, where despite a negotiated treaty that ended hostilities with Sudan and led to the birth of a new nation in 2011, the differences among ethnic groups were ignored and led to new armed fights in December and January.

"Sustainable peace has to include action on all the issues and all the problems and all the causes that led to war and violence," he said. "And sadly in the push to end wars and violence, not enough attention at all is paid to the fact that if we are going to sustain this peace beyond signing a peace agreement, then we are going to have to deal systematically with all these core issues."