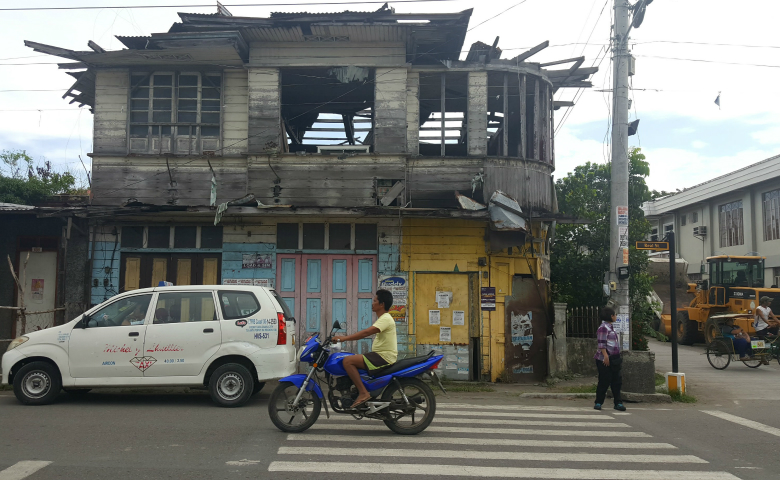 Repairs are still needed in many areas of the Philippines since Haiyan/Yolanda. (GSR photo/Gail DeGeorge)

Almost three years after the world's worst recorded typhoon ravaged the Philippine island of Leyte, the visible wounds are healing. Houses are being constructed, though more are needed. Tiny shops have reopened and a gleaming shopping mall rebuilt. Churches have been repaired and memorials created to honor the thousands killed.

Archbishop John Du of Palo credits the work of the National Secretariat for Social Action / Caritas-Philippines and the outpouring of support of Philippine parishes for much of the area's recovery. Du used the 50th anniversary of the national secretariat and the 38th meeting of the National Secretariat for Social Action General Assembly, the network of priests, religious sisters and lay workers and volunteers in the social action commissions of the country's 85 dioceses, to thank the group.

About 300 members of the network assembled in Palo Sept. 19 to mark the anniversary of its founding and Du acted as host. When approached to host the assembly, "I accepted right away without question," Du said during the assembly's opening Mass.

"Now is the time to thank many friends who descended from their dioceses during those hard times after Super Typhoon Yolanda," he said. "I am thankful to God that we are almost 80 or 90 percent recovered -- so thank God for you social action people for helping us … start all over again."

To spur recovery and aid in future catastrophes, Du created a relief and rehabilitation unit. "Victims now become survivors who can extend help to other people," Du said in an interview. Referring to a recent typhoon that hit northern Philippines, Du said, "When I hear there is a calamity, I really empathize with them. I tell my people we have to help, to do whatever we can to assist because we have been helped."

The work of NASSA-Philippines was part of a massive outpouring of assistance from international aid organizations and religious groups following Super Typhoon Haiyan, locally known as Yolanda, which raked the central Philippines Nov. 8, 2013. With sustained winds of more than 195 mph and gusts as strong as 235 mph, Haiyan created a storm surge of 20 feet in some areas, killed at least 6,300 people (though some estimates are as high as 10,000), and damaged more than 1.1 million homes, displacing millions.

Forty-three Caritas Internationalis members provided $27.3 million in aid to 166 communities in nine dioceses as part of a massive outpouring of charitable and international assistance. Getting local participation and input was essential to rebuilding, said Joseph Chacko, program advisor for Caritas Internationalis. Originally based in London, Chacko temporarily moved to the Philippines to monitor Caritas activities.

Help from Caritas was done in a deliberate, three-year phased process, he said. After supporting and saving lives in the initial aftermath, attention turned to recovery and rebuilding. Ensuring that locals had a livelihood was a priority so training and using local masons, carpenters and electricians was key. In the first few weeks after the storm, workers were brought from the Philippine island of Mindanao, but as soon as a few shelters were constructed, "local masons took over so there was a clear skills transfer," he said.

Housing, infrastructure, wash areas and sanitation had to be built. "The beauty of a participatory approach is that people are at the center of it," Chacko said. "They do their own assessments of vulnerabilities and needs." For example, identifying the 4,000 houses Caritas would rebuild wasn't easy, but communities themselves chose who would get the new houses. The new homeowners also became members of homeowners' associations to learn preventative maintenance and how to prepare their homes to withstand storms.

The third phase has focused on community building -- training locals in disaster preparation and infrastructure maintenance, such as water supply points. Creating community organizations, as well as teaching skills such as saving, accounting and bookkeeping, was also important. Out of the 166 communities, about 62 can now run programs and projects themselves.

Lessons from Haiyan "have given us an opportunity to revisit some other shelter and housing programs that NASSA has operated for several years," Chacko said. "We could see the difference in it." Projects previously relied on contract labor; construction was often poor and homeowners didn't have a stake in the construction.

Asking affected individuals and communities what they could contribute despite their own losses was important in helping them move forward, said Jing Rey Henderson, communications partnership and program development coordinator for NASSA/Caritas Philippines. "Innately, especially for Filipinos, we are very resourceful and we are very patient -- and to the point where sometimes it is negative -- we are very tolerant," she said. While important to acknowledge and recognize the losses, it was also necessary "to shift to a positive so people can say 'I have ownership, I have a say in what happens.' "

Fostering resiliency and sustainability was key in partnering with a parish to help rebuild, said Fr. Jayson Siapco, executive director of the Lipa Archdiocesan Social Action Commission (LASAC) in Luzon. Within days of the storm, the Lipa archdiocese sent a team to distribute goods in four parishes in the affected area, driving some 500 miles over a day and half, to reach Palo. After distributing relief goods, LASAC decided to partner with a community to build houses and help rekindle local industries, he said in an interview.

The Lipa archdiocese raised about $167,488 by January 2014 to help build 100 houses in Burauen, Leyte. With additional help from various aid agencies, they built an additional 50 houses and a multi-purpose center for 63 families on 7.4 acres of land purchased by the Palo archdiocese. They also helped establish livelihood projects, such as carpentry, woodcraft (using fallen coconut trees), pig and fish farms, and making hollow blocks for construction. Before the storm, this building material had to be bought from hardware stores elsewhere; now hardware stores are buying hollow blocks from the local village.

The day the storm struck, Maria Violeta Daylo, 57, a catechist from Assumption of Our Lady Parish in Tanauan, Leyte, was swept away and her house destroyed. She ended up in the river and though she didn't know how to swim, managed to stay afloat. She was rescued and spent nine months in a tent with three sets of donated clothes before a house could be rebuilt. "Faith in God is stronger once you come through something like that," she said in an interview while staffing a booth at a products fair held before the assembly to help raise funds for her diocese. "What is your priority? Money or service? I decided to do full-time service for the Lord. I am witnessing to the Lord -- I am still alive."

An example of Haiyan's legacy is the Relief and Recovery Unit (RRU) started by the Palo archdiocese in 2014 to respond quickly to local natural disasters. After Haiyan, the archbishop wanted a dedicated emergency response office, said Fr. Alcris Badana, who heads up the program.

Volunteers learned techniques for "rapid needs assessment" and developed a response protocol taking into account levels of danger and damage. Confusion reigned in the days before Haiyan, locals said. They didn't understand "storm surge" warnings or how devastating the typhoon could be, and this added to the death toll and destruction. Consequently, the RRU developed a system of clear communication before, during and after storms using a simple color code -- white to red -- to indicate the level of danger and potential impending destruction.

The RRU now has responded to a fire in the local city of Tacloban and four typhoons in other areas of the Philippines, assisting communities using the lessons learned after Haiyan. "This is our mission, the building of resilient communities," Badana said.

Even with the aid of government agencies and non-governmental organizations, it's vital to have a church-based program to respond in emergencies, he said. While government has more resources to rebuild after a disaster, "as a church we wanted to help our people."

It's also important, he said, to "really make people feel that the church is present and helping them. We have to be there right after, helping to clean up. They need to see us, no matter how small the intervention -- sometimes the most important [aid] is our presence because we are not dealing with numbers, we are dealing with persons."

The church is also often in a better position than non-governmental organizations, especially international ones, to understand local needs and sensitivities, he said later in a question and answer session on best practices. One example: for rebuilding, NGOs provided designs for one-room homes, but the RRU recommended two-room homes to allow some privacy for adults in the family.

While much of the focus at National Social Action General Assembly, which convenes every two years, was on storm recovery, there were also reports and presentations on a broad range of social action issues, such as labor rights, sustainable agriculture, climate change and environmental topics. One archdiocese explained its low-cost pharmacy program, in existence for 14 years. Another program that garnered a lot of attention is SHeG or Self-Help Group, essentially a parish community-based savings and microcredit program.

Fr. Edwin Gariguez, executive secretary of NASSA, said that the secretariat is proposing the adoption of a national road map for resiliency and sustainability. While many dioceses are strong in emergency response situations, he said that diocesan personnel need additional training to provide prevention and mitigation assistance and be effective during the recovery and rehabilitation phases.

All this is preparation for what Gariguez called "the new normal." "There are extreme weather events that are happening and we need to be ready because our country is one of the most vulnerable."

Archbishop John Du of Palo at a Mass marking the 38th National Social Action General Assembly and the 50th anniversary of the National Secretariat for Social Acton. He thanked representatives from the 85 dioceses of the Philippines for their assistance during the recovery from Typhoon Haiyan.

According to NASSA, in 2013, the Philippines was hit by eight typhoons (including Haiyan), five floods or landslides, and one earthquake that affected a total of 26.6 million people. The road map for resiliency and sustainability hopes to mainstream disaster risk reduction (DRR) in the work of dioceses, find ways to increase investment for prevention, mitigation and preparedness, include DRR in development planning and strategy, and focus on disaster management cycle and build back better.

Attendees participated Sept. 22 in an "immersion exposure" to Haiyan Recovery Program areas and mangrove planting on the outskirts of Palo. The assembly closed with a Mass and candle lighting ceremony for victims of the typhoon at Santo Nino Parish in Tacloban City.