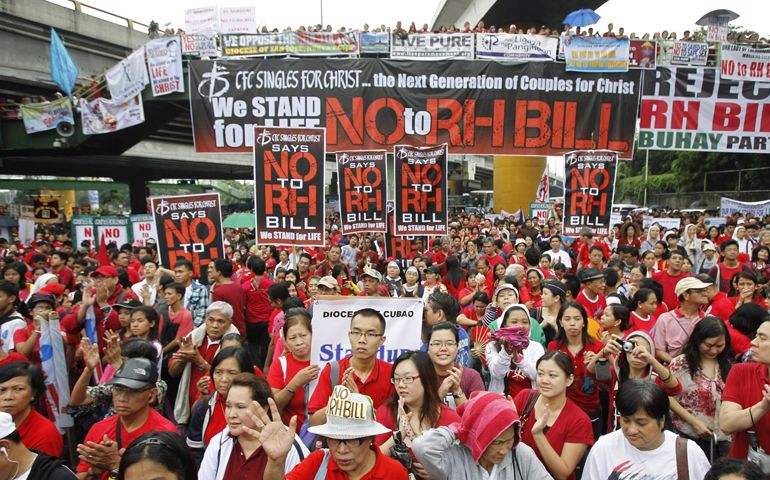 Protesters display anti-Reproductive Health Bill placards during a rally in August at the EDSA Shrine in Manila. Thousands of demonstrators took part in a protest lead by Catholic bishops opposing the bill, a proposed measure allowing the government to distribute contraceptives. (CNS/Reuters/Erik De Castro)

The Philippine House of Representatives passed legislation that will promote artificial contraception as a family planning method, despite fierce opposition by Catholic bishops and religious groups.

The House of Representatives voted 113-104 to approve the Reproductive Health Bill, which had languished in Congress for 14 years, reported the Asian church news agency UCA News. The Senate was scheduled to vote on the measure Dec. 17.

Lorenzo "Erin" Tanada, deputy House speaker, said he cast his vote "with the utmost respect to the position of the faithful."

"I voted with the freedom of the Filipino people in mind and in my conscience when I said yes to the measure," he said.

Tanada said Philippine history has shown differences of opinions between the church and the legislature, only for them "to unite again."

Members of the Catholic Bishops' Conference of the Philippines attended the House session that ended past 2 a.m. Thursday.

About 5,000 priests, nuns, seminarians and laypeople rallied outside Congress earlier in the day to urge legislators to vote against the bill.

Cardinal Luis Tagle of Manila called the bill's passage "unfortunate and tragic" but not a defeat.

"We do not take it as a defeat of truth, for truth shall prevail, especially the truth about human life, marriage and family," he said.

Tagle thanked those who opposed the bill for their efforts "to form consciences and to contribute to the search for the common good."

"This vote leads us to further commit the church ... to the service of the poor, of the family, of women, of infants and children," he said.

Bishop Jose Oliveros of Malolos also said the fight against the bill is not yet over.

"We will continue the fight, in the executive, the Supreme Court, and at the level of individual conscience," he said.

Retired Bishop Teodoro Bacani of Novaliches said the vote "awakened the consciousness of the people."

Supporters of the bill, however, said it is "a key policy tool that not only provides the people with an array of options to plan and manage their families but also, and more importantly, helps in restoring the dignity of women and in improving the quality of their health."

Haiti on shaky road to recovery

Peruvian court: Indigenous communities must be consulted before drilling