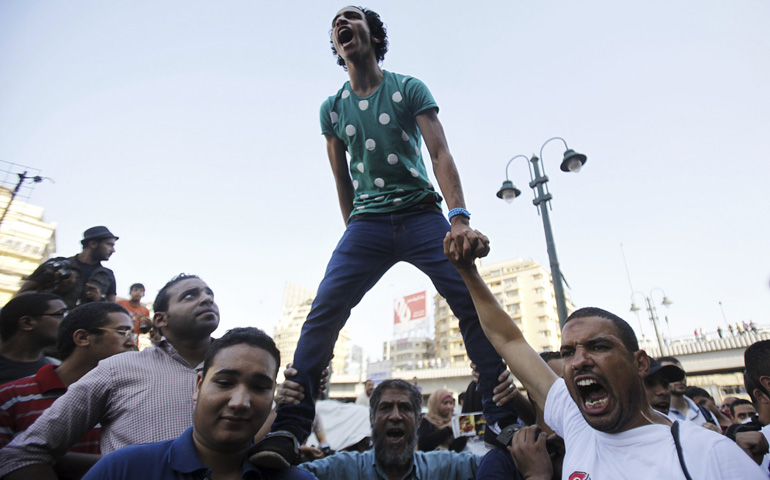 Supporters of the Muslim Brotherhood and ousted Egyptian President Mohammed Morsi shout slogans against the military and interior ministry during a protest in front of Al Istkama mosque in Giza Square, south of Cairo, Aug. 18. (CNS/Reuters/Amr Abdallah Dalsh)

The backlash against Muslim Brotherhood rule in Egypt comes as secular forces across the Middle East are rising up in opposition to political Islam. Divisions reach from top leaders to the street.

Political leaders in Saudi Arabia, United Arab Emirates, Kuwait and Jordan have sided with the Egyptian military and secularists who backed the July 3 ouster of President Mohammed Morsi.

On the streets of Cairo over the weekend, mobs and snipers attacked Morsi supporters, forcing security forces accused of slaughtering the Islamists to stand between them and the mob. The violence in Egypt echoes similar, though less deadly, backlashes against Islamic ruling parties in Tunisia and Turkey.

"The Egyptian uprising two years ago was against the Egyptian army," said Michael Rubin, a Middle East expert at the American Enterprise Institute. But after one year of Muslim Brotherhood rule, "suddenly (Egyptians) are coming out in the streets seeing the army as their savior."

Egypt's anti-Brotherhood uprising has caused at least 900 deaths in clashes so far. In the latest violence, 25 policemen were killed Monday by masked gunmen on the Sinai Peninsula, an area of frequent clashes between Islamist militants and security forces.

It comes after the May-June Gezi Park protests in Turkey against what protesters there described as the creeping authoritarianism of that country's Islamist ruling party and its president, Recep Tayyip Erdogan.

In Tunisia, the birthplace of the Arab Spring, the Islamist Ennhada party has been deadlocked with secularists demanding it step aside and allow a caretaker government to take charge. Secularists emboldened by Morsi's ouster in Egypt took to the streets there three weeks ago after the assassination of a second secularist politician this year by Islamist gunmen.

"We've seen a backlash against the first wave of political actors of the immediate post-revolutionary moment," said Robert Satloff, executive director of the Washington Institute for Near East Policy.

Whether secularists "are making a play everywhere" is unclear, Satloff said, and Gulf states are following their own national interests.

The Gulf states want stability and to counter Shiite expansion in Syria and Iraq, so they support Islamists when it fits their national interests, Satloff said.

"If you're looking for consistency this is not the region to do it," he said.

Arab kings and sheiks are speaking out in support of secular civil society and against Islamists because "they know that eventually the Brotherhood will go after them" too, says Walid Phares, author of the book The Coming Revolution: Struggle for Freedom in the Middle East. "It would be a better deal to recognize civil society little by little than to fall all at once to the Muslim Brotherhood and other Islamists."

The conflict between secularists and Islamists is also generating a new religious dialogue about the role of religion in politics, something many in the West have said is needed since the 9/11 terrorist attacks on the United States, Phares said.

"Religious non-Islamist leaders of the Arab world want free of the sphere of the Muslim Brotherhood," Phares said.

Aaron Zelin, who runs the Jihadology blog, an archive of primary source jihadi documents, said the Arab uprising caused people across the region to speak and act when they feel wronged by their leaders, but it's far too early to count the Islamists out.

The military crackdown in Egypt has brought together all the strands of Islamists, causing ultra-conservative Salafists to join with jihadists in backing the non-violent Brotherhood, Zelin said. All want an Islamist state, and they see the crackdown as an affront against them all.

"They're taking a beating now, but they'll be back," Zelin said.