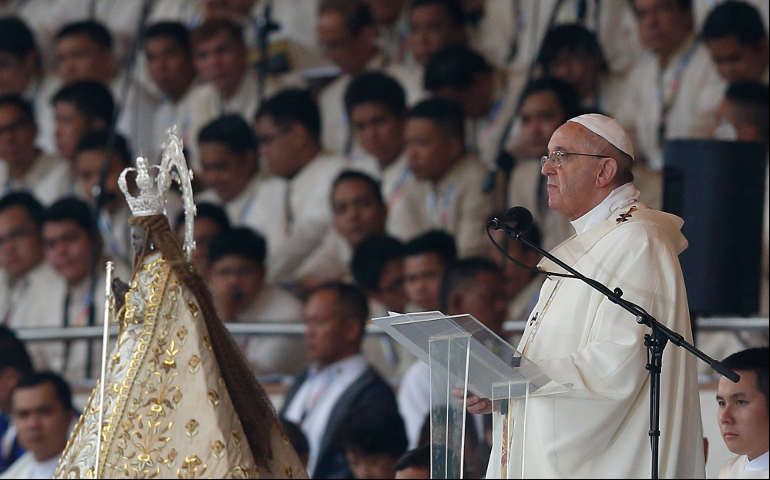 Pope Francis gives the homily while celebrating Mass at Rizal Park in Manila, Philippines, Jan. 18 with statue of Santo Nino in forground. (CNS/Paul Haring)
This article appears in the Francis in the Philippines feature series. View the full series.

Manila, Philippines — Six million people turned out along the papal motorcade route and at rain-drenched Luneta Park for the final Mass of Pope Francis in the Philippines.

Some Massgoers like Jennifer Roman arrived at the park with neighbors on Saturday evening from Iba, Zambales 74.6 miles northwest of Manila. She told NCR her group preferred to spend the night around the park so they could get a good spot right along the barricades for a close view of the pope. It didn't matter that they had to wait to enter the venue. At least they would be “high up in line.”

"It's worth the wait," the nursing student said. "It's like a fiesta!" Roman said.

The Mass coincides with one of the country’s oldest feast of Santo Nino so the liturgy used was in celebration of that feast founded on an image Portuguese explorer Ferdinand Magellan is said to have given to a native queen as baptismal gift when he led a Spanish expedition to the country in 1521.

Catholic Bishops’ Conference of the Philippines Socrates Villegas had invited Santo Nino devotees to bring their statues and join the traditional street prayer-dance at the pope’s mass.

Out came the images in all sizes and designs. A couple even dressed up in velvet and gold in Santo Nino inspired costume.

Other women in green, yellow, and orange gowns swayed in the rhythm of the Sinulog street dance of Santo Nino devotees raising their images occasionally.

When the bell pealed, priests and religious and members of the 1,000 voices choir took their post in the grandstand, and all eyes turned to the road where Francis was expected to ride down in a public Filipino jeep-inspired pope mobile.

His entourage emerged for the usual sweep around the grounds as pilgrims cheered and reached out to Francis who was wearing again a yellow raincoat for his final mass in the country scheduled at 3 pm.

Cardinal Luis Antonio Tagle had to call the cheering crowd to a moment of silence to prepare for the Mass.

The full orchestra composed of sections from various dioceses and a thousand-voices choir announced the start of the Mass with a forceful piece. For the First Reading in Filipino a girl was invited to read the Scripture using Braille.

In his homily, Francis stressed the value of “spiritual childhood” and the vocation of Filipinos to witness to Christ in Asia.

Less than three percent of the population in Asia is Catholic and most of them are in the Philippines.

Francis specified the need for witnessing to truth and justice, caring for nature, protection of the human family and “preventing social structures which perpetuate poverty, ignorance and corruption.

In the end he appealed:”Please don’t forget to pray for me”

Children and persons with disability have figured prominently on Francis trip.

Earlier, Zsa Zsa Calixta and her daughter with a cleft palate who had been waiting in the corner of Quirino and Taft Avenues were ushered into the nunciature so the pope could bless the toddler and mother then hand Calixta a rosary.

Francis just finished the most exciting week of his papacy

Ahead of abuse summit, Vatican officials decline to comment on accused priest

Philippines prepares for pope with messages on spirituality, crowds

A lifestyle, not a task: Vatican reminds bishops of ecumenical priority