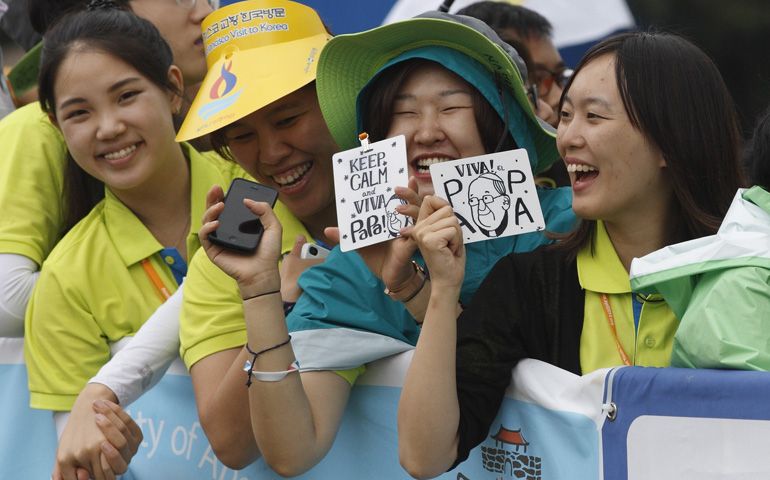 Young women wait for Pope Francis to arrive to celebrate the closing Mass of the sixth Asian Youth Day at Haemi Castle in Haemi, South Korea, Aug. 17. (CNS/Paul Haring)
This article appears in the Francis in Korea feature series. View the full series.

Seoul, South Korea — Pope Francis ended his five-day visit to South Korea with the same message he delivered the moment he first stepped off his Alitalia flight Aug. 14: a call for reconciliation on the Korean peninsula.

Between that first wish and his last public prayer Aug. 18, Francis built on the theme of reconciliation, coupling it with calls for forgiveness and inclusiveness, especially keeping in mind the poor and otherwise marginalized of society.

His itinerary was taxing, but he appeared to hold up. It disappointed some who had hoped it would include visits to spots that could highlight some of the marginalized of which Francis speaks. In formal ceremonies, there were no breaks in tradition. Male prelates always had the front rows.

While the itinerary highlighted Asian Youth Day in Daejeon, South Korea, the trip's visible high point was the Aug. 16 beatification of 124 Korean martyrs. An estimated 1 million people packed the mile-long route from Seoul's City Hall to the plaza before Geongbok Palace, the backdrop of a temporary altar used for the Mass. Geongbok is a royal palace dating from the 18th- and 19th-century era of the martyrs.

The pontifical Mass was a solemn, joyful and orderly occasion. When Francis formally proclaimed the martyrs beatified, the crowds erupted in applause and cheers as regal music bellowed out from loudspeakers, echoing through the city streets.

Some of the more memorable moments of his trip, which included meetings with clergy, religious and lay leaders, came in intimate moments, as when Francis placed his hand on the head of a bedridden child in a center for children living with disabilities. Or when he put a finger to the lips of a teething infant. Francis' humanity shone across Korea, and photos featuring his simplicity and care shot through Korean media networks with the force of a local typhoon.

Francis showed the Korean people "a great model of leadership," Bishop Peter Kang U-il, president of the Korean bishops' conference, told Vatican Radio Aug. 18. "His approach to all kinds of people who are especially ill and disabled and deprived of many human rights ... [this showed] the authentic validity of the leadership [to] which the Korean people are really aspiring," Kang said.

Francis photographs appeared on the front pages of Korean newspapers almost every day of his visit. His smiling face flashed in bright lights of huge display screens draping downtown office buildings, including hotels and banks.

It seemed all so refreshing, a Korean father told NCR. Except for some protests by fundamentalists opposing Catholicism and government support for the papal trip, it was a unifying experience.

South Korean society has fractured in recent years, torn from age-old moorings by rapid economic change. It has been scarred by the April sinking of the Japanese-built and Korean-owned Sewol ferry, which capsized off the coast of Korea April 16, taking some 300 lives to watery graves. Most of those were teens on a high-school-sponsored field trip. That Francis was here to spend time with young Asians, many of whom were the age of those lost, made his trip all the more poignant.

One of the most touching moments came when Francis stepped out of the popemobile as it approached a public altar set up for the beatification ceremony and took a minute to visit with a father of one of the ferry victims. Kim Young-oh was on the 34th day of a hunger strike when he met Francis. Kim had told friends and other victims' relatives that he hoped to enlist Francis in a campaign that families have mounted, demanding an independent investigation and prosecution of the culpable. Kim has been staging his protest in a tent on the plaza where the beatification took place.

His well-being has become a national concern. Kim and Francis clasped hands over a security barrier, exchanging words. Kim bowed twice and presented Francis with a personal letter asking for support. Millions across the nation watched the exchange as the ceremony was broadcast live.

Before Francis' arrival, Koreans, including Catholics and non-Catholics alike, had little idea what to expect. It did not take long before they began to take notice. As Francis got set to leave the airport April 14, he sat down in the back seat of a black KIA hatchback in a caravan of black sedans into the city.

The South Korean economy has made dramatic gains in the past several decades. However, with these gains have come displacement and a growing gulf between rich and poor. New material wealth has spawned an increasing consumer mentality that tempts equating visible goods with success.

Francis' simplicity and move-to-the-bottom mentality offers an alternative message. Coupled with a humility uncommon to Asian heads of state, Francis quickly grabbed Korean attention. Despite the formalities of the papal office, Francis took opportunities to depart the mold in numerous breakaway comments and spontaneous acts.

He refused to sit in chairs he viewed as too large or formal. In a room at Kkottongnae "Flower Village," where he touched several dozen children with disabilities during his Aug. 16 visit, he refused to sit, saying he preferred to stand. A group of religious representatives waiting at his next stop, watching him on a giant screen, quickly scrambled to find a smaller chair.

One of the sisters in the auditorium that day told NCR: "He's telling us to live more simply. We've got to respond -- and will."

He was again a man of surprises.

If reconciliation was Francis' primary theme, concern for the poor and needy was not a far second. He frequently mixed the two, seeming to point out that each is connected to the other.

In his homily on the last day of his visit, as part of a long-highlighted Mass for peace and reconciliation, Francis explained the connections.

Speaking in Seoul's Myongdong Cathedral, perched on a hill cordoned off by police who were out in force but do not carry guns, Francis had one last chance to address Korean dignitaries, including South Korean President Park Geun-hye. Park had recently called upon some Catholic sisters, asking them to resurrect her baptismal certificate.

"Today's Mass is first and foremost a prayer for reconciliation in this Korean family," Francis told the worshipers. "God's gifts of reconciliation, unity and peace are inseparably linked to the grace of conversion, a change of heart, which can alter the course of our lives and our history, as individuals and as a people."

He went on: "But God's urgent summons to conversion also challenges Christ's followers in Korea to examine the quality of their own contribution to the building of a truly just and humane society. It challenges each of you to reflect on the extent to which you, as individuals and communities, show evangelical concern for the less fortunate, the marginalized, those without work and those who do not share in the prosperity of the many. "

At the reconciliation Mass in front-pew seats were several elderly women, known as "comfort women," who had been forced into sex slavery for the Japanese army during World War II. They have been fighting for decades for an apology from the Japanese government. Francis stopped to greet them when he entered.

An invitation had been sent to North Korea, where an estimated 5,000 or more Catholics live, asking the state-run Korean Catholic Association to send a delegation for the papal visit. The association declined the invitation, objecting not to the pope, but rather to an announced joint U.S.-South Korean military exercise that started the very day of the reconciliation Mass and was scheduled to run for 11 days. The exercises reportedly include response scenarios for a North Korean nuclear attack on the South.

Benedictine Sr. Stella Soh Hee-suk, who has studied in the U.S., said that many South Koreans see the North-South division differently than do most Americans. These Koreans, she said, place most of the blame on the shoulders of the United States. Saying that powerful economic interests resist reconciliation, she explained that both U.S. and South Korean governments benefit by holding out against reconciliation while maintaining "a national security mentality."

Soh was arrested last November demonstrating in front of a Korean naval base that is being built on an island off the coast of South Korea. U.S. warships will port at the base.

Francis' vision of international reconciliation goes beyond the Koreas. He made this clear several times during his visit. He encouraged a group of Catholic bishops and young people on the last day of the Asian youth gathering to evangelize their continent "through dialogue and openness, even with others suspicious or intolerant of the church."

"I earnestly hope that those countries of your continent with whom the Holy See does not yet enjoy a full relationship may not hesitate to further a dialogue for the benefit of all," the pope said.

His statement appeared as another overture to China, which has not had formal relations with the Vatican since 1949. It was the latest of several gestures to Beijing since the start of his trip. Flying from Rome to Seoul, the papal plane passed through Chinese airspace. From the airplane, Francis sent a telegram of prayers and greetings to China's President Xi Jinping.

Two days later, in a question-and-answer session with young people, Francis declined to answer a man from Hong Kong who asked how to help Catholics in China, where he said "control and oppression" were increasing.

Meeting with the Korean bishops the first day here, Francis gently but pointedly told them to become more engaged with helping the poor. A visibly animated Francis came on strong, telling the bishops that solidarity with the poor is a must. There can be no compromise. This solidarity, he said, "must penetrate the hearts and minds of the faithful and be reflected in every aspect of ecclesial life."

"The apostolic ideal of 'a church of and for the poor' found eloquent expression in the first Christian communities of your nation," Francis reminded the bishops. "I pray that this ideal will continue to shape the pilgrim path of the church in Korea as she looks to the future."

Pope's quotes: Close to the sick