Pope orders German Catholics to make the 'for many' change 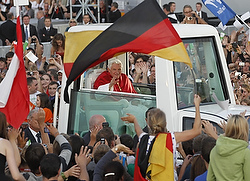 Pope Benedict XVI waves as he arrives to lead a prayer vigil in Germany in September. (CNS/Reuters/Arnd Wiegmann)

And the order to make the change is coming directly from Pope Benedict XVI.

In a recent 2,000-word letter to bishops in his native Germany, the pope addressed the translation of the Latin phrase pro multis in the eucharistic prayer, in which Christ told his disciples at the Last Supper that his blood was poured out, according to literal translation, "for you and for many." He said there had been since the 1960s an "exegetical consensus" built on the idea that the original Hebrew sources implied not "for many" but "for all." However, Benedict wrote, this had been an "interpretation" rather than a "translation," and the Vatican had since asked local churches to revert to the more accurate phrase "for many."

While bishops in Germany had agreed, the pope said, other German-speaking churches appeared intent on keeping the phrase "for all," thus risking "a fission in our innermost sphere of prayer."

"In this context, the Holy See has decided the words 'pro multis' must be translated as such in the new missal translation and not simultaneously interpreted. The simple translation 'for many' must replace the interpretative 'for all,' " Benedict told the bishops.

The pope's move follows years of controversy over new translations of the Catholic Mass in Germany.

"The German bishops have long delayed our new missal and prayer book -- but after this latest intervention, they'll have to make their minds up on the final texts," explained Christoph Arens, home editor at Katholische Nachrichten-Agentur, Germany's Catholic news agency.

"Church commissions have been at work for more than a decade, and there've been other disputes with the Vatican over German renditions of the Latin original," Arens said. "With Benedict XVI now involved directly, the experts will have to come together."

The lay Catholic spoke with NCR after the pope's letter, which was dated April 14, was published April 24 on the German Bishops' Conference website.

An accompanying statement by the conference president, Archbishop Robert Zollitsch, predicted the letter would provide "an important impulse" for completing the new translations.

However, not all German Catholics have welcomed Benedict's initiative, and some theologians are warning it risks reversing liturgical gains from the 1962-65 Second Vatican Council.

Disputes have occurred over phrases used in the Catholic Mass since Vatican II, which made the term "for all" common usage in the church to reflect the view that Christ died to redeem all mankind.

In his letter to the German bishops, Benedict said he is aware that the return to the "for many" translation "poses a great challenge for all those tasked with interpreting the word of God in the church, since for regular church visitors it will almost inevitably appear to spell a rupture in the holiest of spheres. They will ask: Did Christ not die for all? Has the church changed her teaching? ... Well, the church derives this formulation from the institutional narrative of the New Testament; and she does out of respect for the word of Jesus, to remain true to him."

In a March 2001 instruction, Liturgiam Authenticam, the Vatican's Congregation for the Doctrine of the Faith said future editions of the Mass should focus on literal translations.

Then, in a 2006 letter to bishops, the Congregation for Divine Worship and the Discipline of the Sacraments said the pope had now ordered Catholics to revert to the phrase, "for many."

However, church experts have pointed to continuing differences between Catholic practices in Germany and more liberal communities in neighboring Austria and Switzerland, which also use German translations.

In a Vatican news service editorial, the Vatican's spokesman, Jesuit Fr. Federico Lombardi, said some observers would dismiss the distinction as something "only appreciated by specialists."

However, he added that the Eucharist wording lay "at the heart of the church" and was therefore "fundamentally important."

"There's no doubt Jesus died so everyone might be saved," Lombardi added.

"When the Lord offers himself 'for you and for many,' we become directly involved and, in gratitude, take on responsibility for the salvation promised to everyone. The Holy Father -- who has already touched on this in his book about Jesus -- is providing a profound and insightful catechesis here about some of the most important words in the Christian faith."

In his website statement, Zollitsch said there had been a "broad discussion" of relevant terminology during preparation of the German missal, which is due out in 2013, adding that the pope had now made "a valuable contribution to our understanding of the saving action of Jesus Christ."

Meanwhile, the head of church in Austria, Cardinal Christoph Schönborn, praised the pope's "argumentative clarity and depth" and predicted his letter would bring "greater proximity to the traditional words of Jesus Christ in the Bible."

However, several German theologians have criticized Benedict's intervention, including Hans-Joachim Hoehn, a systematic theology professor at Cologne University, who said last week it was "doomed to failure."

Muenster University professor Klaus Mueller accused Benedict of appeasing arch-traditionalist opponents of Vatican II. "The pope's letter, amending the words of consecration in the Mass, is a political concession to extremely conservative church circles," Mueller cautioned in a statement.

"Neither the evangelists nor the present pope heard the Aramaic texts of Jesus. How then can he know to urge the German bishops to use a formulation that follows the Greek tradition, and assume the more usual formula of 'for you and for all' is just an interpretive translation?"

However, in his letter, the pope said recent translators had erred too far toward interpretation, adding that the community gathered for Mass could only be "many," not "all."

"We all know, through experience of the last 50 years, how deeply changes in the liturgical forms and texts affect people," the pontiff told the German bishops.

"It has long been argued that the translation of 'many' should be preceded by a thorough catechesis on the difference between translation and interpretation, a catechesis through which bishops must inform their priests and make clear to the faithful what this is about. This catechesis is a basic requirement before the new translation comes into force."

In his NCR interview, Arens noted that Germany's Evangelical church, known as the EKD, and Jewish faith groups backed use of the term "for many." He added that he believed most Catholics would accept the new translation "without resistance."

"Much of the new German missal is already highly Latinized and inelegant, so I don't anticipate there'll be any special German features marking it off from other language translations," Arens said.

"Compared to disputes over celibacy and clerical sex abuse, there's been little public interest in these new texts anyway, and they're unlikely to generate much new interest in the Catholic faith."

[Jonathan Luxmoore is a freelance writer based in Oxford, England.]

An English translation of Pope Benedict's letter to the German bishops can be found here.

World | Pope orders German Catholics to make the 'for many' change