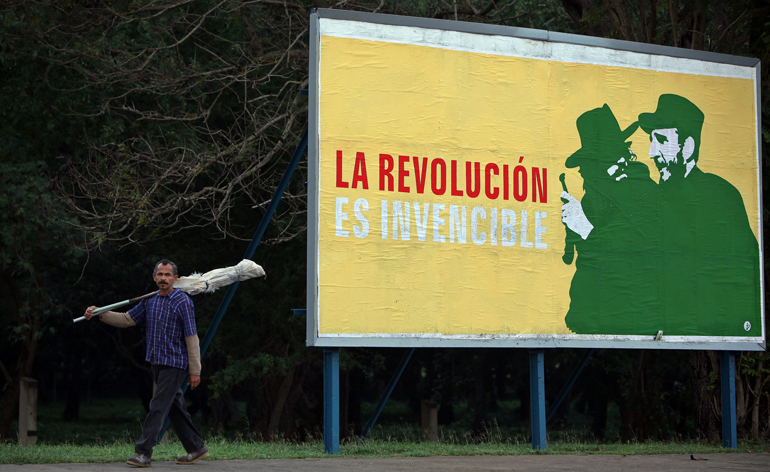 In this Dec. 26, 2014, file photo, a man walks past a Cuban revolutionary banner in Havana. (CNS/Alejandro Ernesto, EPA)

Pope Francis' visit to Cuba and the United States comes as people and politicians in both countries increasingly support ending an economic embargo that has been in place for more than five decades.

U.S. President Barack Obama, Cuban President Raul Castro and the Vatican have called for a lifting of the embargo, which was first put in place in 1960 and repeatedly strengthened in the years since in response to growing strains between the countries.

Yet, despite public support for the embargo to end, U.S. Congress remains separated on the issue, with several bills stalled in subcommittees. Congressional approval is needed to roll back the sanctions.

Several members of the House and Senate have said Cuba needs to transition to an open democracy with free elections before they lend support to ending the embargo.

"Our extensive experience with transitions from communism has shown that economic opening and diplomatic engagement do not automatically lead to political freedom," Sen. Marco Rubio, R-Florida, outspoken supporter of the embargo, wrote in an op-ed in The New York Times in July.

Pope Francis, who helped broker a diplomatic rapprochement between Cuba and the U.S., could lend a powerful voice to the argument against the embargo when he addresses a joint meeting of Congress Sept. 24.

But the pope is unlikely to wade into specific policy matters, Archbishop Thomas Wenski of Miami said in an appearance on "This Week in South Florida" Sept. 13.

"The pope likes to make gestures that are symbolic. Even the fact that he's traveling to Washington from Cuba is symbolic," said Wenski, who will travel with more than 200 people from Miami to Cuba for the papal visit. "I think that's going to speak volumes."

Francis' visit comes as polls in Cuba and the United States show public support growing for doing away with the embargo.

A Pew Research Center poll of 2,002 adults conducted July 14-20 found that 72 percent of respondents -- including 59 percent of Republicans -- favored ending the trade embargo, up from 66 percent in January.

A March poll conducted for Univision Noticias found 96 percent of Cuban adults surveyed were against the embargo, or "bloqueo" as it's called there, and that Obama and Pope Francis were tied as the most popular figures.

Church leaders in both Cuba and the U.S. are opposed to the embargo and have periodically called on the U.S. politicians to lift it.

Havana Cardinal Jaime Ortega Alamino said that, in March 2014, Pope Francis told Obama that "Latin America is united against the embargo" and that lifting it would help the U.S. improve relations with countries in the region.

"The pope spoke about the embargo to Obama, and he told him that it was a totally obsolete measure that was put in place before (Obama) was born," according to an interview with Cardinal Ortega published on the Havana archdiocesan website.

Speaking to the weekly Tribuna de La Habana newspaper before Pope Francis' visit, Cardinal Ortega spoke against the embargo, "which has affected us during many years." He also spoke of a "new possibility" in diplomatic relations that comes with the pope's visit.

"It is a real event for any country," he said. "The pope is coming to visit not only the Catholic Church, also ... the Cuban people."

Trinitarian Father Juan Molina, director of the U.S. bishops' Office for the Church in Latin America, said last month that the embargo puts a "block between two hands, two sister churches working together."

Members of Congress have responded to Obama's calls for the embargo to end with numerous bills, including a bipartisan measure introduced in July by Reps. Tom Emmer, R-Minnesota, and Kathy Castor, D-Florida. That bill, however, and a handful of others that deal with the embargo have failed to make it out of subcommittees.

The U.S. put the first economic embargo in place in 1960 under the administration of President Dwight D. Eisenhower. On Jan. 3, 1961, Eisenhower cut diplomatic ties with Cuba after then-President Fidel Castro nationalized foreign assets, including U.S. property. Eisenhower extended the embargo in response. Congress has strengthened the restrictions several times since.

U.S. and Cuban diplomats leading bilateral negotiations have not discussed the embargo, instead preferring to focus on issues where the two countries share common ground, such as environmental protection, civil aviation and response to natural disasters.

As for the embargo, "There's nothing Cuba can do about that," Josefina Vidal, the Cuban Foreign Ministry's chief of U.S. affairs, told reporters in early September.