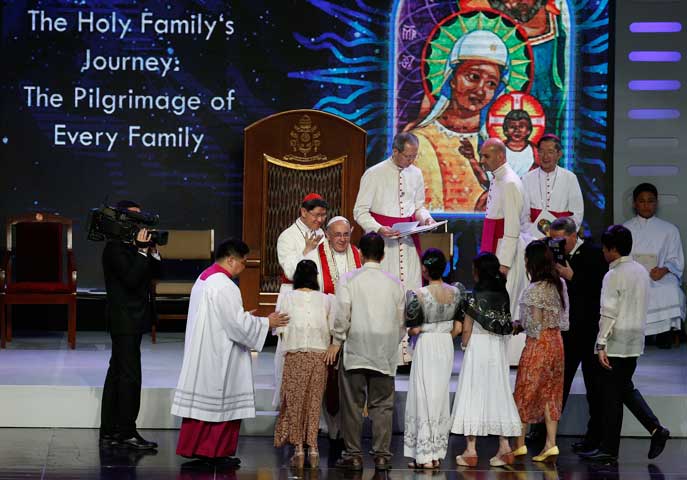 Pope Francis greets family members during a meeting with families in the Mall of Asia Arena in Pasay City, Philippines, Jan. 16. (CNS/Paul Haring)

Leading Filipino Catholics welcome pronouncements Pope Francis made on contraception, family and marriage when he met with thousands of families in Manila Jan. 16.

Francis reiterated at the Manila meeting the church's teaching on human life, marriage and family promulgated by Pope Paul VI in his 1968 encyclical Humanae Vitae.

At the same time, the pope "offered leeway" for particular cases where the ban on artificial contraception may not apply, noted Benedictine Sr. Mary John Mananzan.

Mananzan, who chairs the board of the Women and Gender Commission, a mission partner of the Association of Major Religious Superiors of the Philippines, told NCR she is satisfied with the pope's expressed position.

"I don't expect [Francis] to contradict all his predecessors," she said.

At the Manila "encounter" with Filipino families, Francis praised Paul VI for defending openness to life at a time when population growth was a challenge, saying that Paul "knew the difficulties families experience and that's why in his encyclical he expressed compassion for specific cases and he taught confessors to be particularly compassionate for particular cases."

For Mananzan, "That sentence gives a certain leeway for treating particular cases in another way -- a way of providing for an exception to the rule." She said the pope is showing openness to deviate under certain circumstances.

Mananzan, however, does not see the provision as a soft way of supporting efforts of groups of Catholics who lobbied for the Philippines' contentious Reproductive Health Law, but as a means to treat certain cases outside the norm.

"Maybe here is the leeway for conscience, though, as I understand it; there seems to be needed guidance from somebody -- like confessors -- who should take into consideration certain cases," the theologian nun said. She cited as an example when natural family planning does not work for women or couples.

In the last analysis, Mananzan said, "conscience is our main guide for action." The pope has provided for particular situations, she said. "I would take that as my cue for exercising my conscience in certain situations."

The nun said she was also "glad" to hear of Francis' reported clarification in an in-flight interview that he does not mean that Christians should make a lot of babies in a series "like rabbits."

"His people can misunderstand what he said at the Manila meeting about the decreasing populations in some countries," Mananzan said. Misperception is likely to happen, also, after the pope had just exalted large families as "role model for solidarity and sharing" during the Italian Association of Large Families' December gathering in Rome.

The catechism for Filipino Catholics teaches that "couples should bring into the world generously only the children whom they can raise up as good human beings."

Mananzan said, "The way I see it, the pope is very orthodox in doctrine, but radical in action."

She cited the way in which Francis explained long-standing church doctrine without going into dogma or moralizing. For example, he encouraged families "never to stop dreaming" together and working together for this dream, and ensuring that families offer a sanctuary of respect for life.

In an earlier forum, former Sen. Francisco Tatad, a leading opponent of the 2012 Reproductive Health Law, told NCR that Francis' reference to Paul's encyclical, "leaves no doubt that this pope will defend life and sanctity of married life and marriage, contrary to what many in the media would like him to say."

A version of this story appeared in the Jan 30-Feb 12, 2015 print issue under the headline: Pope's words on family draw praise.