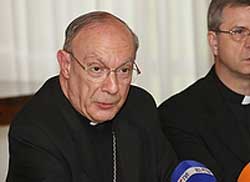 BRUSSELS -- A storm of protest and disbelief is blowing across Belgium once again. This time the eye of the storm is Archbishop André-Joseph Léonard, the 70-year-old successor to Cardinal Godfried Danneels as Archbishop of Mechelen-Brussels.

In a new book, Gesprekken met Monseigneur Léonard, (Conversations with Archbishop Léonard), recently published by the Belgian publisher Lannoo, the archbishop asserts that the world-wide AIDS epidemic is a matter of “immanent justice.”

Especially in the Belgian political world the protest against Léonard is strong and trenchant. “Repugnant” and “stupid” were the reactions from key members of the Flemish parliament. Eva Brems, from the Green party, has called her colleagues to support a parliamentary resolution that "the disgusting statements of Archbishop Léonard be condemned in no uncertain terms."

Other parliamentarians are calling for a re-examination of the legal tax status of the Belgian Catholic Church. Wouter Beke, chairperson of the Christian Democrat Party (CD&V), says he is strongly offended by Archbishop Léonard’s position. “This statement [by Léonard} is very far from the Christian charity that Father Damian and so many others have been trying to live out,” he said.

In the Belgian church as well, Léonard’s recent statements have created anger and disbelief. Sr. Monica Van Kerrebroeck, former member of the Flemish Parliament for the Christian Democrats, expresses the consternation of many. “I just can’t go along with this,” she said in an interview. “This statement from Léonard comes on hard and runs against my feelings. God is not a punishing God but a God of love.”

Mark Van de Voorde, former editor-in-chief for Kerk en Leven (Church and Life), a popular weekly Catholic newspaper with wide distribution throughout Flanders, is “unhappy and angry.” He said he had tried to give Léonard the benefit of the doubt but just can’t do it.

“I think [Léonard] sees it as a kind of natural law; but that is an old-fashioned viewpoint,” Van de Voorde was quoted in the Belgian newspaper De Standaard as saying. "Human beings rise above nature through culture, and even if the AIDS epidemic is the result of promiscuous behavior, you just cannot say that it is a matter of justice that people get AIDS.”

For Fr. Johnny De Mot, pastor Our Lady of Good Help parish in Brussels, the words of his archbishop are personally painful and deeply disturbing. In 1996 his brother died of AIDS. “It hits me very personally when AIDS is presented as a punishment. I find [Léonard’s words] just terrible -- actually outrageous.”

Some Catholics have defended Léonard, saying his words have been greatly misunderstood. However, what Léonard said in the interview published in Gesprekken met Monseigneur Léonard appears clear and to the point.

In the book, when asked about AIDS, Léonard responded that AIDS is not a punishment from God, but “It is more a kind of immanent justice, somewhat like ecology and the environment: as when we have to pay the bill for what we have done to the milieu."

Responding to a journalist from De Standaard, Mettepenningen stressed that “AIDS flows logically from the facts: from a loose lifestyle. It is a bit like the person who smokes. That person has a greater chance of getting lung cancer.”

"It is very clear that the church does not applaud people who have a lot of sex with many different partners," he continued. "Our argument goes against the current stream. We stand behind monogamous relations and the recognition of a strong link between sexuality and love ... Let’s be very clear. Léonard is here speaking about victims who got AIDS as the result of a promiscuous lifestyle. He is not speaking, for example, about babies who are born with the virus.”

In an April 2007 interview in the French-language weekly magazine Télé Moustique, Léonard was asked about his position on homosexuality. He responded that homosexual behavior as “abnormal,” because it goes against the purpose of human sexuality which is propagation.

“It is an imperfectly developed stage of human sexuality which contradicts its inner logic. Homosexuals have encountered a blockage in their normal psychological development, rendering them abnormal," he said.

When gay activists countered that Léonard was trying to stigmatize gay people, he clarified that homosexual activity is abnormal, not homosexually oriented people. The issue came up again shortly after he was appointed Archbishop of Mechelen-Brussels in January 2010.

When asked about his viewpoint on homosexuality, Archbishop Léonard replied: “Homosexuality is not the same as normal sex in the same way that anorexia is not a normal appetite.”

Meanwhile, Bishop Luc Van Looy, who since 2004 has been Bishop of the Diocese of Ghent, has publicly distanced himself from Léonard’s statements about AIDS and about homosexuality. During an interview on a local television station, Van Looy said “It cannot be allowed, I think, that the sick after such a statement (from Léonard) now have to suffer even more because they have been so stigmatized.”

Van Looy said he did agree with the archbishop that licentious sexual relations are always wrong; but, the Bishop of Ghent stressed, that applies to homosexual as well as to heterosexual relations. Distancing himself even more from Léonard’s position, the Ghent Bishop also said that “stable homosexual relationships” ought to be possible.

When Léonard succeeded Cardinal Danneels as archbishop of Mechelen-Brussels, many of the Cardinal’s friends lamented that the conservative Léonard (he is very fond of the Tridentine Mass) would bring big changes to the Catholic church in Belgium. At the time Danneels chuckled and said: “The menu will be the same ... just a change of waiters.”

Today, many in Belgium appear to be saying: It’s been a very long time since Belgium has had a waiter like this archbishop and his menu is very, very old indeed.