Service is the best religion 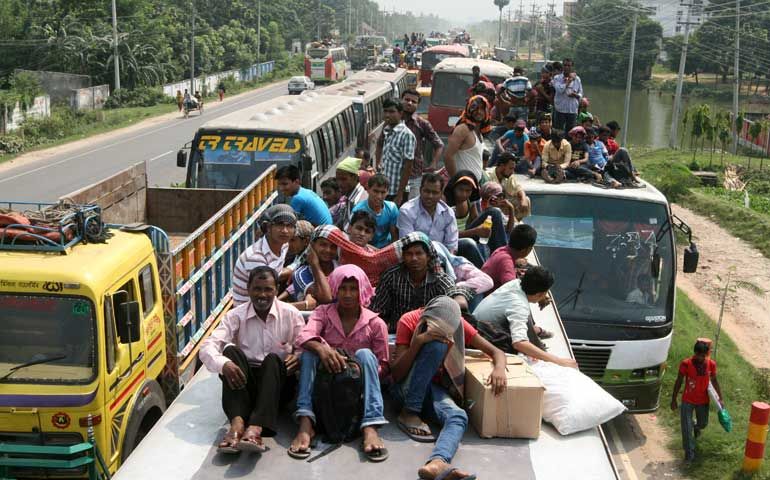 Bangladeshi people sit atop a bus in Dhaka Oct. 3, prior to traveling across the country to celebrate Eid al-Adha. At least 3 million people leave the capital city to join their relatives in their home villages for the festival. (Newscom/Sipa USA/Palash Khan)

Editor's note: Maryknoll Fr. Bob McCahill marked 50 years in mission in 2014. For many years, he has been sending an annual letter to friends at Christmastime, chronicling his experience living among the people of Bangladesh. Since 1984, NCR has published his letter every year in the Christmas issue. Following is an edited version of his 2014 letter.

"I have no money" was always Shuhel's excuse for refusing my offer to take him, his wife, Parveen, and disabled son, Akash, to the physiotherapy center. Even though I had pledged to pay their way and other expenses, he felt he must take along some money as insurance against the unknown. Finally, he scraped up a small amount and we departed. When we reached the city after four hours of travel, a blind man got on our bus and announced his need for alms from tenderhearted passengers. I saw only one donor respond: Parveen. She handed a sizeable offering to Shuhel to place in the blind man's hand. The poor commiserate with the poor.

My closest neighbors, Kamrul and Jasna, have six children, ages 1 to 13 years. Nitu is 6 years old and eager to start school. The school's administrator is putting her off because she cannot believe the little girl is 6. For Nitu is not only small, she is also bald and hairless. She has progeria, i.e., premature aging, and appears to be a little old woman. Meanwhile, as Nitu waits for permission to enter school, she practices the alphabet and behaves as a pupil under her mother's compassionate tutelage.

Sumon, Mitu and Mahe, three high-schoolers, stopped me outside Mamoon's store. They were curious to hear about my life and labors. After a few questions and attentive listening to my replies, Sumon spoke of having seen me bicycling around and hearing about the service I offer to disabled children. "We hope to do that someday," he declared for the trio.

"If you do," I predicted, "yours will be happy lives."

A long, muddy bicycle ride resulted mostly in exercise one morning. Azizul, whom I intended to see at his home, was beyond reach. His neighborhood was flooded, no boat was available, and I could not shout loud enough to be heard by him. There was nothing to do but return to my base. However, the time was not wasted. Other villagers learned my purpose for coming and understood my desire to help Azizul's child. That purpose remained unfulfilled. But there is no such thing as wasted time in mission, for people are always observing us, scrutinizing us. It is good for them to see our disappointment when we are unable to help one of them.

On the fifth day of the month of Ramadan, I was biking to the bazaar on the main street of Hobiganj. A youthful bicyclist, carrying behind him a larger lad, lost control and steered into me. Skin on the back of my hand ripped. Because it was the month of Islamic fasting and Muslims strive to bridle their tempers and quarrelsomeness, both youths remained calm and conciliatory. The larger boy even fetched an old newspaper to blot my bleeding hand. I, however, was stern and uninclined to act the affably wounded one. In that, I missed out on a purpose for fasting in Islam: to make us more tolerant and forgiving.

One late afternoon, a vivacious Muslim woman stepped into my room as I was reading and addressed me in the local dialect. (The Bengali language has its local variants.) Her speech was made even more garbled by the wad of betalnut and leaves in her mouth. I smiled while she spoke; what else to do when you see someone is trying to please you? After a few minutes, she departed. Soon afterward, Kamrul and Jasna teased me. "Did you understand what she said to you?

I admitted, "I got that she is a widow, but not much else."

The couple laughed and informed me: "She suggested your union with her in marriage!" Such neighborliness I have rarely found in Bangladesh.

Every January and part of February, I am accompanied by major seminarians, one at a time for two or three weeks each. This year, Nicholas, James and I did together the things I am accustomed to doing alone during the other 11 months: bicycling, searching for disabled children, food shopping, cooking, praying. I do not claim our community created any special environment in our locality. Nor were all our encounters with Muslims and Hindus sweet. Nevertheless, we did have ample opportunities to witness our faith in the midst of a multitude who are, willy-nilly, witnesses of their faiths to us.

On a brief return to Tangail, the district where I lived 30 years earlier, I borrowed a bicycle in order to visit villages and old friends. There, I met Shaju's wife and children, a happy family. In 1980, Shaju was 4 years old, had kwashiorkor, and weighed 12 pounds. We took him to a hospital just in time. He grew healthy; Allah is merciful. Shaju's 4-year-old daughter has an intriguing name: Ma Morium, that is, Mother Mary. Do Muslims respect Jesus' mother? Indeed they do.

During April, Headmaster Gaffar invited me to the high school's Beginning of Spring celebration. Songs were rendered for three hours for the largely middle-class parents of the institution's students. Gaffar requested that I say something to the gathering. I ended my remarks saying, "Service is the best religion," which caused them to break into applause. The folks seem to understand this Christian missionary is among them to serve the poorest in their bodily needs, and for no other hidden agenda.

There is a statement of the church's teaching from the document titled "The Relation of the Church to Non-Christian Religions" that I have almost memorized: "Let Christians, while witnessing to their own faith and way of life, acknowledge, preserve and encourage the spiritual and moral good found among non-Christians, as well as the values in their society and culture."

To the One who prompts all of us to acknowledge, preserve and encourage that which is admirable and good among non-Christians, all thanks be given.

World | Service is the best religion

A radical shift away from a church with inflexible laws