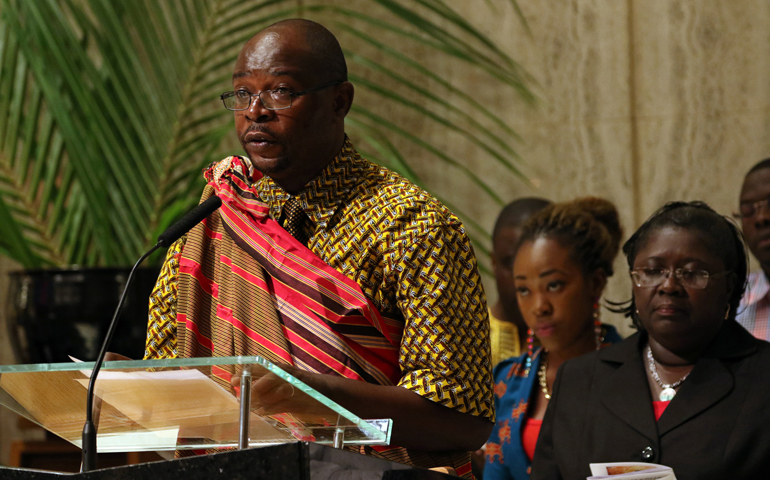 Ugandan-born Pius Bugembe, a religion teacher at Cardinal Hayes High School in the Bronx, N.Y., reads one of the general intercessions in Swahili during a special evening prayer service June 29 at Holy Family Church in New York City. (CNS/Gregory A. Shemitz)

A June 29 prayer service at Holy Family Church in New York City not only recalled the sacrifices of African martyrs in church history but also paid tribute to those who have died recently for their faith.

"Recent events that have taken place in different parts of Africa show that there is no lack of men and women who continue to bear witness to their faith in God by offering their very lives," said Archbishop Charles Balvo, who is apostolic nuncio to Kenya and South Sudan.

The archbishop gave his remarks at the prayer service organized by the archdiocese of New York's Office of Black Ministry to draw attention to the ongoing persecution and killing of Christians in Africa.

"The modern martyrs of Africa may seem weak in the eyes of their persecutors but, like those who have gone before them, by their suffering and death they show forth and make manifest the power of God," said the archbishop, who grew up in Brooklyn and was ordained a priest for the New York archdiocese.

He urged participants at the prayer service to pray for an end to persecution and suffering and for the courage and strength to remain faithful to God.

Balvo said in the few years he has lived in Nairobi, he has learned of other names that can be "added to the list of those African men and women who have made the supreme sacrifice of their lives in the profession of their faith in Christ."

He said the list should include Blesseds Isidore Bakanja, Daudi Okelo, Jildo Irwa and Anuarite Nengapeta, all of whom who were killed for their beliefs.

He also said the Nyeri diocese in Kenya is beginning the process of the recognizing more than 70 martyrs from the Mau Mau Uprising, a military conflict in Kenya during the 1950s.

More recent martyrs, he said, include the Kenyan bus passengers, most of whom were teachers, and quarry workers, who died last year; nearly 150 students shot at Garissa University College this spring; and the Coptic Christians in Libya, who were first kidnapped and then put to death last February.

The archbishop said all who have suffered from anti-Christian violence in Nigeria and other neighboring countries should also be prayerfully remembered.

He said recent African martyrs as well as those from ages past "give us a timeless example of faith, a faith that does not fail" and plants the seeds for further growth of the Catholic church.

Early African saints he referenced included St. Augustine, the great father of the church, as well as Sts. Cyprian, Felicity and Perpetua. He also mentioned St. Charles Lwanga and his companions, all Ugandans who were martyred for their faith in the 19th century.

New York Cardinal Timothy Dolan who joined Balvo at the prayer service along with leaders of other faith traditions, shared a letter he had received a few months ago from Archbishop Ignatius Kaigama of Jos, president of the Catholic Bishops' Conference of Nigeria, after writing to him expressing concern for his safety.

The archbishop thanked the cardinal for his concern and said his life is "in daily peril, especially on Sundays, but my people and I remain together and strong in faith."

He said the Christians in Africa are in "spiritual and moral unity" with journalists who had been killed by Islamic extremists but he also noted that attention to those actions "only increases our sense of abandonment and isolation here in Africa."

"Europe and North America rightly abhor the massacre of writers for 'Charlie Hebdo,' but we hear hardly a whimper about our 276 Christian girls, kidnapped, raped, disfigured, and probably soon to be murdered by Boko Haram here in Nigeria, or the ongoing religious cleansing in Sudan, or the continued harassment, injustice, and persecution of Christians in Egypt," he wrote.

The Nigerian archbishop described Africa as the new Colosseum "where we are thrown to the beasts and the world seems deaf, blind, mute. Please do not abandon us! Do African Christians not matter?"

In reply, Dolan said people of faith in the United States "are not deaf, blind or mute. We hear you! We see what they are doing! We this evening speak up to God, to the unconcerned world, for you and your people."

He told the archbishop: "We are in tears as well for the venom against Christians in the Mideast, where Christian families trace their roots back to the apostles, seven centuries before the arrival of Islam, a religion of peace that, sadly, in the words of Pope Francis, has been 'perverted' by hate by those whose extremism makes their appeal to God murderously illogical and an abomination."

The cardinal apologized for Americans, including those who have come here from Africa, who "have been timid in standing with you against today's barbarians and shouting: No more! Enough! Stop!"

He assured the archbishop that people of faith "stand with you over the butchered bodies of your people, over the smoldering timbers of your churches, schools, convents, clinics, and hospitals, confident that God cries with us, that Jesus is still on his cross with you, that you and your people are not occasional sound bites or news trailers, but names, souls, brothers and sisters, God's children, whom we will not and cannot forget."