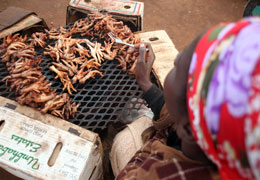 BULAWAYO, Zimbabwe -- Zimbabweans living in neighboring South Africa will soon find themselves deported in droves after the South African government announced it was revoking a special permission that has allowed Zimbabweans to live and work in Africa’s largest economy.

A directive issued in September will withdraw in December a special dispensation announced last year that waived visa requirements for foreign migrant workers.

The visa suspension came into force as demand for labor peaked, especially in the construction industry as South Africa prepared to host the soccer World Cup in June. This provided employment opportunities for millions of Zimbabweans and inevitably opened the immigration floodgates.

While this allowed millions to stay in the country without official documents, it made it impossible to document the exact number of Zimbabweans scattered across the region’s economic powerhouse. This in turn raised the specter of xenophobia as locals complained Zimbabwean cheap labor was depriving them of jobs.

About 2 million Zimbabweans have sought refuge and work in South Africa over the last decade, according to the International Organization for Migration, but other estimates put the number at up to 3 million. Many fled the political chaos that has engulfed Zimbabwe in recent years, but most are fleeing a collapsed economy.

Themba Maseko, spokesman for the South African government, told local media that the decision to withdraw the visa waiver was based on the belief that “some form of stability has returned to Zimbabwe,” a claim disputed by human rights and exile groups.

South Africa is the Southern African Development Community-appointed mediator in the drawn-out disagreements between Zimbabwe’s main political parties, which formed a government of national unity two years ago. Analysts believe South African President Jacob Zuma is under pressure at home and from the international community to show that his mediation efforts are bearing fruit.

While Zimbabwe government officials may be anxious about tens of thousands of returning workers and the loss of their salary remittances, they cannot publicly oppose the move. They are eager to show the international community that the political and economic situation has improved.

Political violence in 2000 sparked the exodus to South Africa and a lack of paying jobs at home spurred it on for a decade. With Zimbabwe entering a new political phase with the writing of a new constitution and another round of elections next year, human rights groups are reporting increased incidents of political violence and intimidation.

Though the visa suspension was announced as temporary last year, its withdrawal came as a surprise for some.

“They just want to throw us out without having done anything to help our country out of this political and economic mess,” said Jacob Nare, a teacher who has taken up a job as a security guard in South Africa. “We cannot return [to Zimbabwe] when we know there are no jobs. I am not going back home to starve.”

The Zimbabwe government is making frantic efforts to issue passports to its nationals in South Africa, but critics say that with the country’s limited resources, this is going to be a tough exercise, considering the huge number of Zimbabweans who have illegally settled in South Africa.

For the lucky few who have or can secure a Zimbabwe passport, they must still find the money for visa fees, which can come to $260, an amount out of reach for many.

“The people here are in a panic mode as they can see themselves deported come December,” said a Mariannhill missionary working with Zimbabwean immigrants in South Africa.

“There is a general feeling [among South Africans] that the situation that led to the immigration in the first place has changed, but not many Zimbabweans living here agree,” said the priest, who requested anonymity to protect his work.

For those still living in Zimbabwe, like self-employed Timothy Dube, the scrapping of the special permit to live and work in South Africa means that even if he is faced with real threats to his life during the writing of a new constitution, he will not be able to flee to South Africa.

“We will never be able to acquire the legal documents to enable us to work there,” Dube said. “Not many people who already do not have jobs will ever be able to raise visa fees so it means we will be stuck here forever.”

Still, a lack of documents hasn’t stopped millions of Zimbabweans in the past from entering South Africa, their dreamland, illegally.

Nare remains defiant: “We have been arrested and deported before so nothing will change after this announcement. We will stay here as long as it takes.”

[Marko Phiri is a freelance journalist based in Bulawayo, Zimbabwe’s second largest city.]