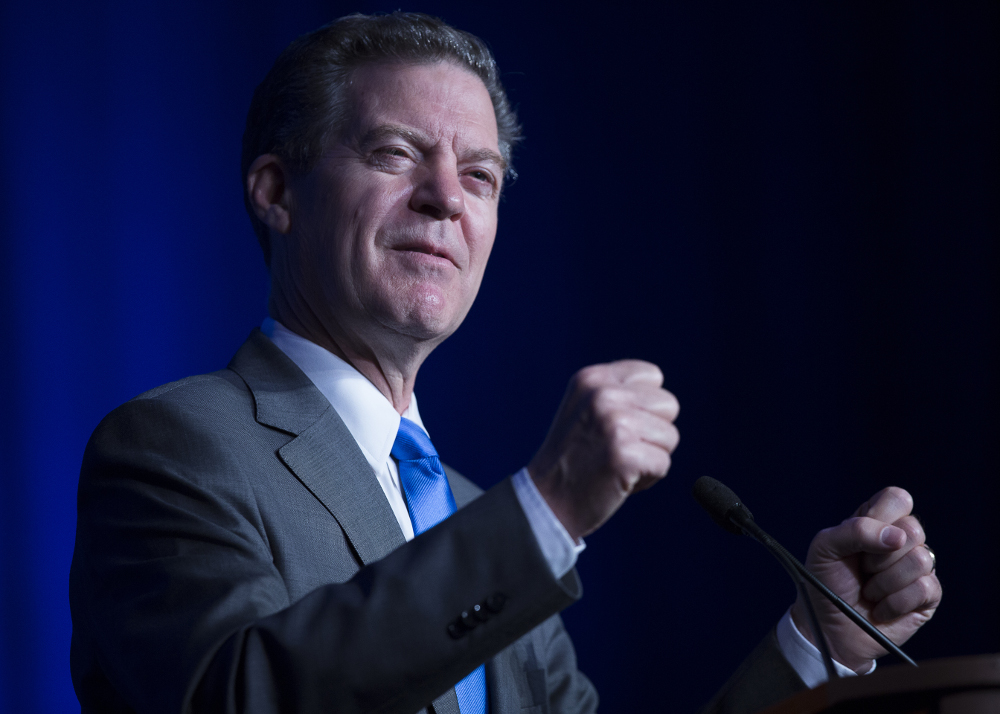 "One person's bondage is another person's burden to break," he told reporters May 29. "We're all people with beautiful and undeniable human dignity. Our lives are sacred. Our right to choose the road our conscience takes is inalienable."

Brownback joined U.S. Secretary of State Mike Pompeo at a news conference to release the annual International Religious Freedom Report, which covers the period between Jan. 1 and Dec. 31, 2017.

Pompeo also announced the United States will host the first ministerial meeting to be held aimed at advancing religious freedom around the world. It will take place July 25 and July 26 in Washington. He said it will provide an opportunity to "break new ground," and will not just be a "discussion group."

Among its findings the report noted:

-- The plight of the Rohingya and the Kachin people in Myanmar. Brownback noted that he visited several of the refugee camps in Bangladesh about a month ago. "The situation is dire. We must do more to help them, as they continue to be targeted for their faith."

-- In North Korea, up to 120,000 political prisoners in "horrific conditions" in camps across the country, some have been imprisoned for religious reasons. The report said there were 1,304 cases of alleged religious freedom violations in the country last year.

-- In Eritrea, the government "reportedly killed, arrested, and tortured religious adherents and coerced individuals into renouncing their faith."

-- Tajikistan continues to prohibit minors from even participating in any religious activities.

-- Saudi Arabia does not recognize the right of non-Muslims to practice their religion in public and imprisons, lashes, and fines individuals for apostasy, blasphemy, and insulting the state's interpretation of Islam.

-- In Turkmenistan, individuals who gather for worship without registering with the government face arrest, detention, and harassment.

--In China Falun Gong adherents, Uighur Muslims and members of other religious minorities continue to be imprisoned; with many of them dying in custody.

-- In Iran, the government deals harshly with religious minorities. Shia religious leaders who do not support government policies reportedly continue to face intimidation and arrest by authorities. The government continues to harass, interrogate and arrest Bahais, Christians (particularly converts), Sunni Muslims and other religious minorities, and regulates Christian religious practices closely to enforce a prohibition on proselytizing. Government officials discriminate against Jews and the use of anti-Semitic language.

"We also remain very concerned about religious freedom or the lack thereof in Pakistan, where some 50 individuals are serving life sentences for blasphemy, according to civil society reports. Seventeen are awaiting execution," Brownback said. "And in Russia, authorities target peaceful religious groups, including Jehovah's Witnesses, equating them with terrorists."

He said he would "welcome engagement with these and any governments on urgently needed reforms."

"So today, 20 years after Congress passed the original International Religious Freedom Act, we've made important progress, but for far too many, the state of religious freedom is dire," he added. "We have to work together to accomplish change."

He called the new report critical and important, but said that "strong action must follow."

"We must move religious freedom forward. We must defend it in every corner of the globe," Brownback said, adding that the upcoming ministerial meeting aims to do just that.

"Two key objectives of the Trump administration are reduction of terrorism and growing the economy," he said. "With religious freedom, you get both of them. It is also a fundamental human right under assault in much of the world."