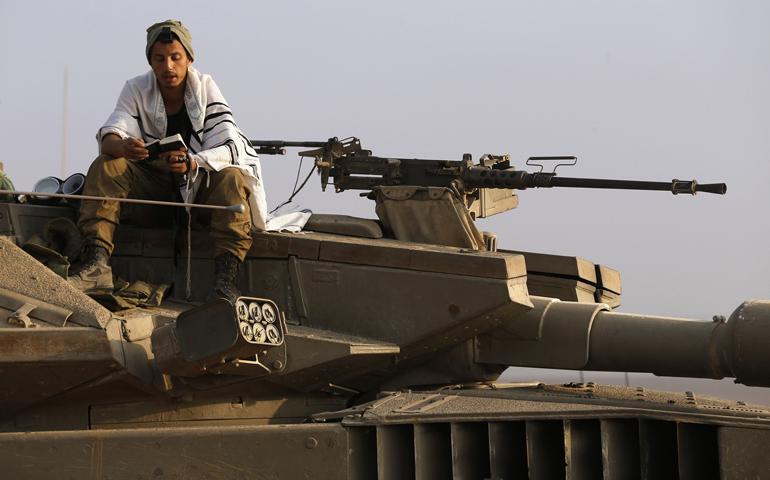 An Israeli soldier prays atop a tank Wednesday near the border with the Gaza Strip. (CNS/Reuters/Baz Ratner)

The Vatican representative to the U.N. Human Rights Council urged the Israeli military and fighters in the Gaza Strip to stop targeting civilian areas.

"As the number of people killed, wounded, uprooted from their homes, continues to increase in the conflict between Israel and some Palestinian groups, particularly in the Gaza Strip, the voice of reason seems submerged by the blast of arms," Archbishop Silvano Tomasi said Wednesday during a special session of the council in Geneva.

Since hostilities exploded in early July, he said, most of the victims have been civilians, "who by international humanitarian law should be protected."

"The United Nations estimates that approximately 70 percent of Palestinians killed have been innocent civilians. This is just as intolerable as the rockets and missiles directed indiscriminately toward civilian targets in Israel," said the archbishop, who serves as the Vatican's permanent representative to U.N. agencies in Geneva.

The text of Tomasi's remarks to the council was distributed by email.

The archbishop reiterated the position of the Catholic church that violence brings only destruction and that Israelis and Palestinians must engage in a dialogue, accepting each other's right to exist peacefully in their own states with internationally recognized borders and that both Israelis and Palestinians have a right to decent living conditions.

Tomasi also called on the media to report in a "fair and unbiased manner the tragedy of all who are suffering because of the conflict."

The violence must stop, he said: The only thing violence does is spread poison and push the possibility of peace further away.

"The perpetration of injustices and the violation of human rights, especially the right to life and to live in peace and security, sow fresh seeds of hatred and resentment," he said.

"A culture of violence is being consolidated, the fruits of which are destruction and death," Tomasi said. "Consciences are paralyzed by a climate of protracted violence, which seeks to impose solutions through the annihilation of the other. Demonizing others, however, does not eliminate their rights. Instead, the way to the future lies in recognizing our common humanity."