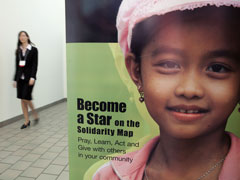 An attendee walks past a Catholic Relief Services display during a symposium on international religious freedom at The Catholic University of America in Washington Sept. 12. (CNS/Nancy Phelan Wiechec)

WASHINGTON -- While concern over religious freedom is a hot topic of political debate in the United States, the issue internationally is a far more immediate matter of life and death, of national security, and of special concern to women, who are most often the victims of religious intolerance. The stark dimensions of the problem were outlined during an eight-hour symposium Sept. 12 at The Catholic University of America here.

A few of the themes explored at the symposium, titled "International Religious Freedom: An Imperative for Peace and the Common Good," were:

Among 80 or more participants at the invitation-only symposium were four U.S. cardinals -- Timothy Dolan of New York, president of the U.S. Conference of Catholic Bishops; Donald Wuerl of Washington; Sean O'Malley of Boston; and Theodore McCarrick, who since his retirement as archbishop of Washington has been engaged in a major project to improve Catholic-Muslim relations around the world.

"According to the International Society for Human Rights, 150,000 Christians are killed for their faith every year, meaning we have 17 new martyrs every hour of every day," Dolan said in the symposium's opening address.

"As Secretary of State [Hillary] Clinton observed only 10 weeks ago, 'More than a billion people live under governments that systematically suppress religious freedoms ... members of faith communities long under pressure report that it is rising. Even some countries that are making progress on expanding political freedom are frozen when it comes to religious freedom,' " Dolan added.

Giving greater urgency to the symposium was the fact that just the day before, four Americans, including U.S. Ambassador Christopher Stevens, and several Libyan soldiers had been murdered at the U.S. consulate in Benghazi, Libya, in an apparent terrorist attack at least aided by a demonstration there against a American-made anti-Muslim movie that insults the Prophet Muhammad. Cairo was also the scene of demonstrations against the movie, and similar protests were expected to grow in other parts of the Arab and Muslim world in the following days.

The events in Benghazi and Cairo actually disrupted part of the symposium's agenda. White House Deputy National Security Advisor Denis McDonough, slated to speak at a 6:15 p.m. session on U.S. policy and international religious freedom, was held up in emergency meetings at the White House and could not get to Catholic University to give his talk until after 7 p.m. Catholic News Service reported that McDonough had been in White House briefings for 24 hours before attending the Catholic University event, and he reportedly went almost immediately back to the White House after delivering his talk.

Thomas Farr, director of the Religious Freedom Project of Georgetown University's Berkley Center for Religion, Peace, and World Affairs and a former U.S. foreign service official -- McDonough's partner in the final panel on religious freedom and U.S. policy -- bluntly characterized all violent responses to offenses against religious beliefs as "toxic" and unworthy of any religion.

"Let me be clear. No one should insult the sacred beliefs of another," he said. "It is an assault on human dignity and respect for others. But the malevolent idea that the proper response to defamation of religion is criminal prosecution, let alone violence or murder, is a dangerous problem in the Muslim-majority world. ...

"This toxic attitude -- that anyone offending Islam must be punished -- is responsible for many of the growing numbers of attacks on religious minorities worldwide, attacks that are causing an estimated 150,000 Christian deaths per year. This tragedy, I would submit, warrants far more attention that it has received from Western policymakers and the media," he said. "It suggests that Christian minorities, many of whom are longstanding contributors to the cultures of their respective societies, are being targeted ... so that they will flee" their homelands of many centuries. 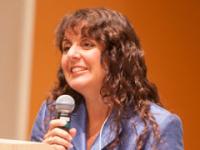 Maryann Cusimano Love, a professor of international relations in Catholic University's department of politics and longtime advisor to several U.S. governmental and Catholic organizations, including the State Department's Working Group on Religion and Foreign Policy, noted that women and girls are most affected by religious persecution, discrimination, repression, social hostility or other attacks on religious freedom.

"Religious freedom is a women's rights issue as well as a [national] security issue," she said.

She described the 1998 U.S. International Freedom of Religion Act as legislation that caused a "sea change" in U.S. attention to religious freedom as a significant element in foreign policy.

But it is time now, she said, to more effectively apply the principles of the 1998 act to U.S. foreign policy.

She suggested that despite the Catholic church's disagreements with many of the world's leading women's movements on other issues, it might find them "unlikely partners" in a shared opposition to obstacles to religious freedom around the world.

John Carr, former head of the U.S. bishops' justice, peace and development office and a fellow at Harvard University's Kennedy Institute of Politics (see story on Page 9), offered a dozen or so practical strategic points for those seeking to advance religious freedom and toleration.

Carr warned strongly against confusing the actions of individual believers -- whether Muslim militants or the apparent ultra-right Christian producers of the film that has provoked major demonstrations around the world -- with the actual faith of the religion they claim to represent.

"When people misuse faith," he said, "it is they who are wrong -- not their faith."

Cosponsoring the Sept. 12 symposium, along with The Catholic University of America, were the U.S. Conference of Catholic Bishops and Catholic Relief Services, the U.S. bishops' overseas relief and development agency.

Texts and video of the symposium talks are available at iprcua.com/2012/09/12/international-religious-liberty.

US Catholic health care is a treasure