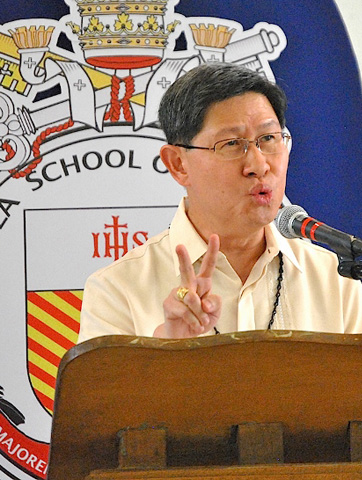 Cardinal Luis Antonio Tagle of Manila has invited schools of theology and theologians to research questions emerging from preparations for the Synod of Bishops on the family to help resolve the debate on situations confronting families around the world.

The issues culled from the pre-synod survey sent to dioceses in October and discussions of the council of the Synod of Bishops show these situations are "so complex," Tagle told professors, students and guests Sept. 3 in the chapel of Loyola House of Studies.

During the lecture at the Jesuit seminary, Tagle said the situation of families presents "an invitation to institutes of higher learning to contribute through research and pastoral creativity to resolve our debate."

"[Synod survey] responses show that the level of knowledge and acceptance varies from place to place," he said. "Generally speaking, biblical teaching regarding the family is quite widespread, but there is much work that remains to be done in terms of appreciation of church teaching on marriage, parenting and family, and other statements of bishops' conferences and papal homilies."

While survey responses show that generally, family is "good news," several reported on families who live in poverty and amid war and who face migration, separation and domestic violence. The synodal council also reflected on same-sex marriages, mixed-faith marriages, divorced spouses, grandparents acting as parents to children left behind, and other situations.

He summarized over the synod's working document and said: "The big question for us is when people come to us for sacramental marriage, is faith a motivation? In the context of a world where faith is considered as superfluous, even irrelevant, does faith still influence people's choice about marriage and staying in marriage, or is marriage simply a social or cultural event?"

Tagle said he does not know of any viable post-sacramental program in parishes and dioceses in the Philippines. "We spend so much time in the preparation, and afterward, there's no sustaining guidance."

Another question for theologians is, "What are sacraments?" Are they "rewards to the righteous or punishment?" he asked. Tagle said he wants to find out how to blend formation in Christian teaching, yet "show the hope that God offers to people in painful situations."

He said couples in irregular marital situations said they feel shamed -- even condemned -- by the church, which "does not have room for them, so they distance themselves." Some pastors have refused to baptize children of parents who are not married in the church.

Francis "was deeply touched by this," Tagle said. He then asked his audience, "How do we reach out to them, assure them that in the church, they still find a community and home?"

Respondents to the survey also cited difficulties with communication within the family.

"This is not new, but I think what is lamented here is that we have many means of communicating ... But have these means and gadgets really taught us how to communicate, or are they merely means of transferring information swiftly?" the cardinal asked.

Communication problems impact the transmission of the faith in the family and society. One "big concern" that emerged in the "Communicating the Gospel of the Family in Today's World" section of the document is related to Catholics' knowledge and acceptance of the teaching of the church and the Bible regarding the family.

Schools of theology could also address the need for formation of priests, religious, and lay pastoral workers, Tagle said.

Language of church documents is another concern that needs to "shift as cultures and mindsets shift," Tagle said. He cited misunderstanding of the philosophical concept of natural law.

"We did a survey in the council: What do people think these days when they hear the word 'natural?' " For some people, natural is the same as spontaneity, he said.

A review of the church's language is called for, Tagle said. "We experts presume that our language, which is clear to us, is absorbed by others in the same way that we understand it. Not anymore," he said. Using a more biblical approach, such as resorting to narratives and symbols in communicating church teaching, has been proposed. That way, "we speak also to people of other faiths and cultures," Tagle said.

Tagle, a member of the 15-man council of the Synod of Bishops since 2012, has been appointed one of three presidents of the synod to be held Oct. 5-19 at the Vatican. It is focused on the theme "Pastoral Challenges of the Family in the Context of Evangelization."

[N.J. Viehland is a correspondent for National Catholic Reporter based in the Philippines.]

A version of this story appeared in the Sept 26-Oct 9, 2014 print issue under the headline: Cardinal invites theologians to study family issues.