Trial of Guatemalan dictator Ríos Montt annulled on a technicality 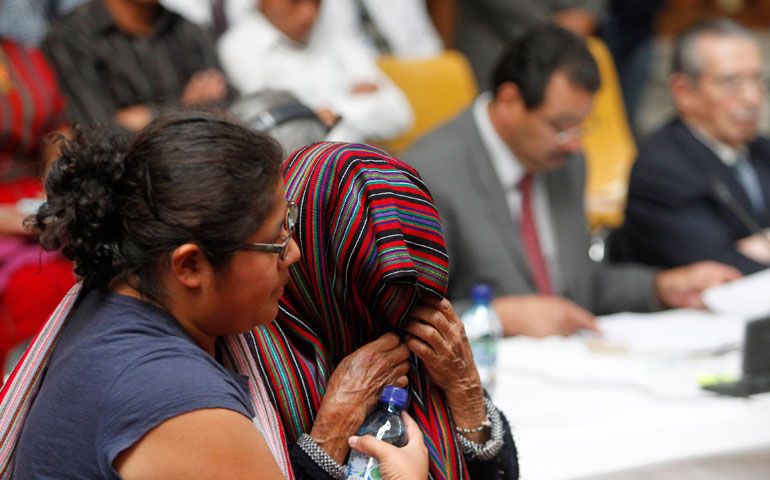 An idigenous woman of Guatemala's Ixil region covers her face as she walks to testify in the trial against Efrain Rios Montt in the Supreme Court of Justice in Guatemala City April 2. (Photos by Reuters/Jorge Dan Lopez)

Guatemala City — After four weeks of testimony, on April 18 a separate court granted a defense request to annul the Guatemala genocide trial against Gen. José Efraín Ríos Montt and his intelligence chief, Mauricio Rodríguez Sánchez, in a decision based on a technicality.

“You are mocking the victims,” the prosecution said in a small, crowded meeting room amid a crush of press. “The victims are the accused,” said the defense.

Across town that night at the elegant National Theater, when the culture minister opened a film series invoking the name of current President Otto Pérez Molina, who served in the military under Ríos Montt, the house erupted into cries, “Genocidio, genocidio.”

Prosecutors are expected to appeal.

[Editor's Note: Below is a story that was published in the April 26-May 9 print edition of NCR, covering recent testimony in the trial before it was annulled.]

Guatemala City -- The Guatemala genocide trial is moving from wrenching eyewitness accounts of brutality and denigration to expert testimony, sometimes dizzying in detail, and a defense strategy that charges that Catholic priests and sisters bent on political change laid the groundwork for violence. In a moment met with gasps in the courtroom, a former soldier testified that current President Otto Pérez Molina ordered civilian executions when he was a base commander during the administration of the accused, Gen. José Efraín Ríos Montt and his intelligence chief, Mauricio Rodríguez Sánchez.

An extraordinary procession of witnesses -- more than 100 -- has created a foundation of prosecution testimony before a daily audience of other survivors and spectators who clench their jaws in apparent anger as they listen or who wipe away tears.

"Are we animals that they can do anything to us?" said a woman who testified she had been forced to stand by as four soldiers raped her 18-year-old daughter. Like others who testified to sexual violence, her identity was partly hidden with a stole woven in traditional Ixil Maya pattern, draped over her head. The cloth trembled. "She was crying," the woman said of her daughter. "They were hurting her."

Pedro Cobo said he went down to the riverbank to look for his parents, brothers and sisters on the day soldiers killed villagers. "My mother was nude," he said. "The river was full of blood."

In a terse but telling mirror of witness testimony, members of the multidisciplinary teams of the Guatemalan Forensic Anthropology Foundation report on exhumations, detailing the conditions of bones and crania indicating violent death. Visuals are projected onto a tribunal wall so judges can see evidence of exit and entrance wounds compatible with use of firearms at close range, of ribs and jaws broken as if by blows, skeletons of newborns killed by force. The forensic experts testify in direct and scientific fashion, but cross-examination can approach the macabre, as when the defense probed whether the science proved some 60 victims from one village, Chel, had been truly decapitated as witnesses testified, or heads remained partially attached.

Ríos Montt's administration, from March 1982 to August 1983, received U.S. military funding, and President Ronald Reagan praised the dictator as "a man of integrity." Ríos Montt stands charged with genocide based on the deaths of 1,771 Ixil Maya in a wider conflict that took some 200,000 lives, the vast majority civilians who died at army hands, according to a U.N.-sponsored Truth Commission.

In the courtroom, evidence of mass killing by government forces can seem overwhelming, but victims' testimony alone is not enough to prove the charge of genocide. Prosecutors must convince judges that evidence shows there was a deliberate intent to eliminate persons based on their membership in a group -- in this case Ixil Maya, who speak one of the country's 23 languages. Only expert witnesses can frame the violence as genocide or, on the part of the defense, take the putative frame apart.

"A racist state perpetrated the genocide," said Marta Elena Casaús Arzú, a Guatemalan scholar and professor at the University of Madrid. Decades of undervaluing the indigenous created a "culture broth," so "it was only a matter of time" until an explosion of racial killing took place, she said. Referring to the Ixil as the "internal enemy" took racism into military plans, said Casaús, author of one of the country's most renowned books in recent years, Guatemala: Linaje y Racismo ("Guatemala: Lineage and Racism").

Sexual violence was "without a doubt an expression of racism, of dehumanization -- it followed protocols," she said. Captured women were made to bathe, their necklaces stuffed down their throats, and then military according to rank raped them, she said of the report she submitted to the court. "It was pre-established, not spontaneous, a pattern of conduct, misogyny and race hate."

Having begun its case with an avalanche of testimony to unspeakable acts, the prosecution aimed to draw a picture of a state long concerned with "whitening" its population, as Casaús put it, considering indigenous groups inherently rebellious and a brake on development. Beyond outright killings, the army's terror campaign forcibly displaced long-rooted Ixil communities, said University of California anthropologist Beatriz Manz, who researched among refugees in Mexican camps. Documents obtained under a Freedom of Information Act request, she said, indicate that in 1982-83 the CIA knew of the situation in the Ixil Triangle, terming it "difficult" because the government treated "civilians as guerrillas."

Defense attorneys, who include a former rebel commander, do not appear to base their case on denial of the violence. Often they do not question witnesses, cross-examining none of the 10 women who testified to sexual brutality, for instance. Occasionally they ask whether a witness was a guerrilla or had relatives who were guerrillas. They ask whether all the victims in the described mass killing events or whom witnesses met fleeing in the mountains were exclusively Ixil or included other ethnicities. They ask about the ethnicity of civil patrollers, indigenous paramilitary controlled by the army.

Ríos Montt's attorneys draw their own picture of a nation that, at the moment of the general's 1982 takeover, was on the verge of falling to a challenge by leftist insurgents whose heartland was the remote highland region home of the Ixil. Throughout the 1970s, says defense history, "Marxist" Catholic religious filled a vacuum created by virtual abandonment of the region by a neglectful government, undermining traditional social relationships and preparing the way for Marxist-led rebels who replaced government functions with their own. Priests and nuns evangelized with revolutionary ideas, enabling guerrillas.

The defense presents a chain of command during the violence that aims to separate Ríos Montt from direct responsibility. "The entity that held the power in the government was the army," lawyer and retired officer Carlos Leonel Méndez Tejada said, suggesting that the president himself was not necessarily involved in military operations or local tactics. Former Gen. Luis Quilo testified that the role of commander in chief was to set national military policy. It would not have been Ríos Montt's responsibility, he said, but that of the chief of the general staff to issue direct orders for operations and campaigns that zone commanders then implemented.

In the court of public opinion, some commentators write of pride in an ever-stronger justice system that exhibits their nation as the first to take on one of its own for genocide, when leaders elsewhere have only faced such charges in international tribunals.

Others blame the trial for defaming Guatemalans. "We are not Nazis, not Rwanda," a columnist wrote. On April 14, a 20-page newspaper supplement appeared, calling the genocide charge a "farce." Photos in the supplement included one described as a Catholic nun "directing/manipulating" indigenous at a court session, and historical photos from the Ixil and Ixcán regions identified as those of Sacred Heart Fr. Luis Gurriarán, Jesuit Fernando Hoyos Rodríguez (holding an automatic rifle) and Spanish priest Salvador Huguet "indoctrinating youth." The publication, funded by the Foundation Against Terrorism, whose participants include former military officials, is subtitled "The Marxist Conspiracy from the Catholic Church."

Ríos Montt has declared he will not testify on his own behalf, and President Pérez has said, "There was no genocide." Archbishop Oscar Julio Vian has said in his opinion there was genocide and those who say there was not "must prove it in court." A decision is expected by May 1.