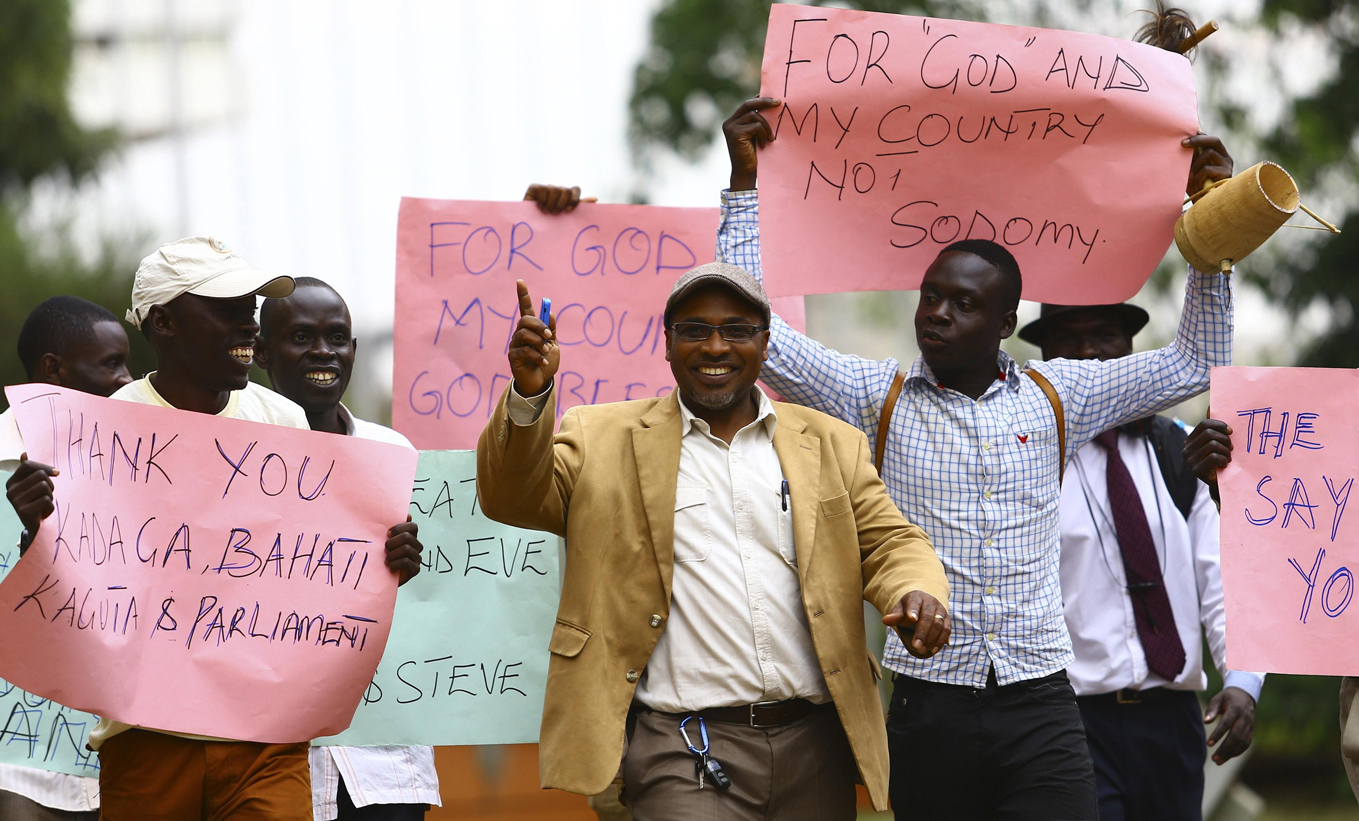 Uganda's Catholic bishops have begun reviewing a text of the country's new anti-gay law in order to come up with "an educated" response, said a senior church official.

"We want to do a good, educated study of it, so we can make an educated judgment," said Msgr. John Baptist Kauta, secretary-general of the Uganda Episcopal Conference.

Kauta, who spoke to Catholic News Service by phone March 5, more than week after the controversial bill became law, said the bishops had just finished a retreat and had only gotten an official text of the new law the previous day.

"I hope you appreciate the position of the Episcopal Conference. We got (the text) yesterday at 4 o'clock. That is God's honest truth. We are studying the text, and will give our opinion," he said.

He said he expected the bishops to come up with a response to the new law by as early as March 8 and that it would incorporate "all their opinions."

"We had never seen the text (of the new law) until yesterday," Kauta reiterated.

A growing number of Western nations and institutions have condemned Uganda's new anti-gay bill, termed the Anti-Homosexuality Act, which was signed into law Feb. 24 by Ugandan President Yoweri Museveni. The bill originally proposed the death penalty for "aggravated homosexuality," but first-time offenders will now face life in jail, instead of an originally proposed 14-year prison term.

The United States says it is now reconsidering its ties and financial aid to Uganda in response to the law, and Norway, Denmark and the World Bank have decided to withhold millions of dollars to the country in funds.

Museveni said the law was necessary to prevent Western powers from promoting homosexuality and imposing "social values" in his country and the rest of Africa.

It has received broad support in Uganda, one of 37 African nations where gay sex is banned and where homosexuality is largely considered taboo.

"Many see the phenomenon as un-African and against African social and religious heritage. Homosexual lifestyle is perceived to be against nature," said Comboni Fr. John Baptist Keraryo Opargiw, a Ugandan who works at Comboni headquarters in Rome.

"The issue of homosexuality and lesbianism in Africa is one which is a challenge to the cultural integrity and moral fabric of African societies," he said in an email from Rome when asked about how homosexuality is traditionally viewed in Africa.

He spoke of sexuality being linked to procreation and said, "Every member of the family or clan is an investment of life-force for the community, whose prestige and social standing depends very much on numerical strength. Whoever does not contribute to this is regarded as a loss to the community, and if he/she is so by choice, it is even worse and grave," the priest said.

He added: "Just over a century ago, homosexuality was an abomination in the West but has worked its way to legitimacy. Will Africa follow suit, letting her cultural values and norms in this regard evolve? This is a million-dollar question!"

Another expatriate Ugandan priest dismissed claims homosexuality was "un-African," or "foreign," but said that in Uganda and other African nations, the approach to it "was different."

"It is not that this is a foreign thing. (Homosexuality) existed, but in Africa sexual things are a private matter," said the priest.

He agreed to be interviewed on condition of anonymity due to what he said was the sensitivity of the issue back home.

It was Western groups defending homosexuality in Uganda and other places in Africa, combined with Western evangelical churches combating it there, that led to gay sex becoming such "a hot topic" after years of no one caring about it, claimed the priest.

"Until people started making noise, nobody cared," he said, adding he thought it ironic that many of the Western churches preaching against homosexuality in Uganda were U.S.-supported.

"These churches are sponsored by the USA, so when I see America condemning this bill, I think, wait, this (anti-homosexuality) mentality has been sown by your own guys," he said, laughing.

In an interview Feb. 27, three days after the anti-gay bill was signed into law, Kauta told CNS: "Our reaction from the church is very clear, we don't support homosexuality."

But he also pointed out that an anti-gay bill first introduced in 2009 was not condoned by Uganda's Catholic Church because it had proposed the death penalty and other harsh punishments for those convicted of homosexual acts.

"The bishops were not in favor of that. We were for compassion, and we believe (homosexuals) can change," he said.

About 44 percent of Ugandans are Catholic.