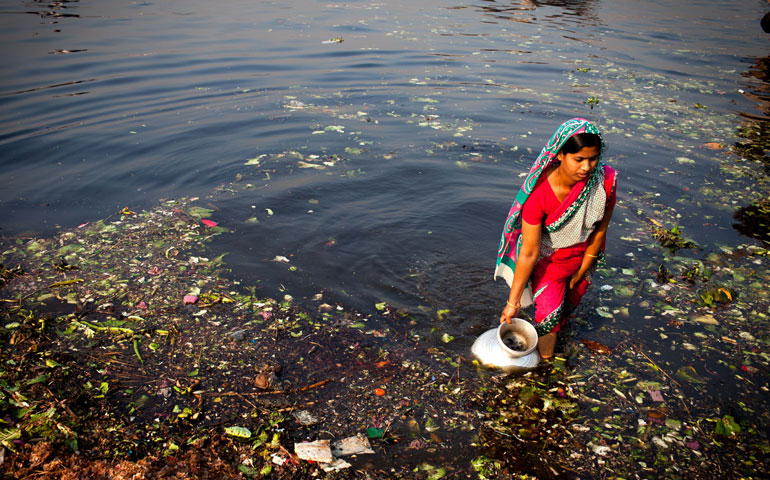 A woman collects dirty water, to be put over produce at a vegetable market, from the polluted Buriganga River in Dhaka, Bangladesh, March 19. A large swathe of the river has turned pitch-black with toxic waste, oil and chemicals flowing into it from industrial units. (Newscom/ZUMA Press/KM Asad)

In late September, the United Nations will formally adopt the sustainable development goals that establish an ambitious framework to combat poverty, inequality and environmental degradation over the next 15 years.

The approval of the sustainable development goals follows on the heels of Pope Francis' groundbreaking environmental encyclical, "Laudato Si', on Care for Our Common Home," which emphasizes the link between economic injustice and the alarming deterioration of the planet's ecosystems.

As Francis explains, climate change, deforestation, loss of biodiversity, pollution of air and water, and the export of toxic waste to poor countries pose serious threats to present and future generations and to the planet's fauna and flora.

The primary cause of global environmental degradation is the profligate consumption of the planet's resources by its wealthiest inhabitants. Twenty percent of the world's population currently consumes approximately 80 percent of its resources, and generates 90 percent of its waste.

Francis points out that our economy turns people and nature into commodities to be exploited for short-term gain and discarded when they are no longer useful. Efforts to protect the environment through market mechanisms and technological fixes often exacerbate the problem by failing to challenge an economic system based upon the domination of nature that has increased inequality within and between nations and has brought the planet's ecosystems to the brink of collapse.

Environmental degradation is a moral issue because its effects are borne disproportionately by those who contributed least to the problem and possess the fewest resources to protect themselves from harm.

As Francis observes, "The depletion of fishing reserves especially hurts small fishing communities without the means to replace these resources; water pollution particularly affects the poor who cannot buy bottled water; and rises in the sea level mainly affect impoverished coastal populations who have nowhere else to go."

Transnational corporations are implicated in many of the worst human rights and environmental abuses (particularly in developing countries), and often leave a trail of devastation when they depart, including, as Francis writes, "unemployment, abandoned towns, the depletion of natural reserves, deforestation, the impoverishment of agriculture and local stock breeding, open pits, riven hills, polluted rivers, and a handful of social works which are no longer sustainable."

Francis laments the failure of existing legal frameworks to combat poverty and environmental degradation, and calls for a new approach grounded in justice and morality to address the roots rather than merely the symptoms of these interrelated problems.

While the sustainable development goals represent a welcome incorporation of environmental concerns into the development agenda, they fall short of Francis' vision by seeking to moderate rather than transform the consumption-driven, growth-oriented model of economic development that degrades human dignity and has caused potentially catastrophic environmental harm.

In order to create legal frameworks faithful to Francis' insights, the following four reforms are essential:

[Carmen G. Gonzalez is a professor of law at Seattle University School of Law and a member scholar of the Center for Progressive Reform. She is the co-editor of International Environmental Law and the Global South.]

A version of this story appeared in the Sept 25-Oct 8, 2015 print issue under the headline: UN goals fall short of Francis' vision.