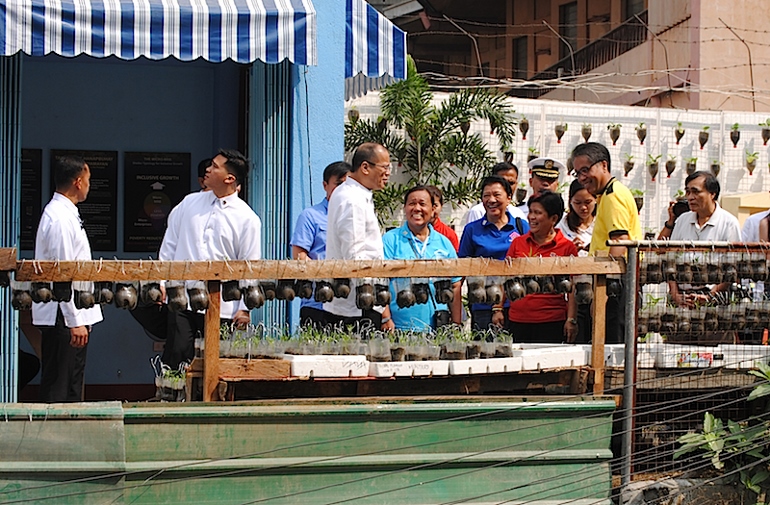 The Estero de San Miguel housing project in Manila’s Legarda area is the national government’s first attempt to build houses for homeless and landless people in the city, so families who have built shanties in dangerous areas can safely continue with their lives and their work.

Wednesday, one organization of families in Lagarda gave President Benigno Aquino a tour around the first medium-rise building constructed near their current settlement along a creek, where the government is working to relocate more than 100 households.

Filomena Cinco is community chairperson of the Barangay 412, Zone 2 area. She told NCR people who would be living in the new housing being built here along the wall of the archdiocese’s San Lorenzo Ruiz Catholic center are “happy” and “grateful” that the government opted for the on-site housing project instead of relocating them far away from their children’s schools and their jobs.

“It makes our struggle of many years worthwhile and pushes our community to work even more closely with each other and with our supporters like UPA, church officials and government agencies,” Cinco said.

The 3-story buildings, conceptualized by urban planner and environmentalist architect Felino Palafox in consultation with the community and executed by architect Albert Zambrano of Mapua Institute of Technology School of Architecture, are energy efficient and resistant to floods, liquefaction and earthquakes.

They are set 3 meters (about 10 feet) away from the creek, with windows and doors placed to allow efficient use of natural light and cross-ventilation; housing units start on the second floor above shops and commercial units.

A struggle of many years

She noted the “struggle” the community organization, United Citizens of Legarda (NML), went through and the experiences that “tested its unity.” She acknowledged the “support” for their initiative from Aquino, Social Service Secretary Corazon Soliman and local government chief and Vice President Mar Roxas.

Cinco, who moved to Estero in Legarda in the late 1980s after she married, recalled “threats of demolition” her community faced.

“The community respected my father-in-law and normally sought his opinion and advice. When he died, I continued the leadership until we registered NML with the Securities and Exchange Commission, so we could have representation in dialogues with mayors and government offices who wanted to deal with leaders only,” Cinco told NCR.

When UPA workers came to link up with community leaders in 2009, they helped residents dialogue with mayors. Later the Legarda organization joined Urban Poor Alliance, different groups around the country fighting for housing and other rights of landless people in cities – people living on land they have no legal right to.

“We came to see the need for linking with the church leaders, especially to help priests and bishops understand our situation and to get them to help us deal with government,” Cinco said.

In early 2000, they approached Cardinal Gaudencio Rosales who was then archbishop of Manila

“We told him our problems and he assured us he stands behind us,” the community government leader said.

She also credited Manila Auxiliary Bishop Broderick Pabillo with getting government officials to meet with their group.

“We experienced writing up to seven letters to the same office and not getting a response until the bishop called or talked to the government official to give us even just 10 minutes – mayors, NHA (National Housing Authority), even Malacañang (presidential office) and HUDCC (Housing and Urban Development Coordinating Council), ” Cinco said.

Among “most heartbreaking” past experiences was the “suspicious” fire that razed their homes the day after Christmas 2011. Arson investigators blamed faulty wiring, but Cinco says people doubt that to be the case because some heard something drop on the roof before the blaze. There also was a pattern of fires breaking out in communities being eyed for demolition.

Families, however, managed to rebuild shanties with help from Habitat and other groups and individuals.

United Citizens of Legarda stuck with their search for a legitimate settlement. They worked with government officials, architects, engineers and even Aquino’s staff to acquire land nearby where the model building was presented to the president. They pushed officials to order and allow resources for tests for adequate soil firmness, earthquake resiliency and other standards.

“It was a long and painful process, but we understand and worked through it for our family’s safety,” Cinco said.

For Pabillo, last week’s model building presentation “shows that in-city relocation, which urban poor groups have been pushing for years, can be done.”

He told NCR in his Manila office, “I hope they (concerned government agencies) pick it up and change the perspective of the rest of government of moving people as far outside the city as possible.”