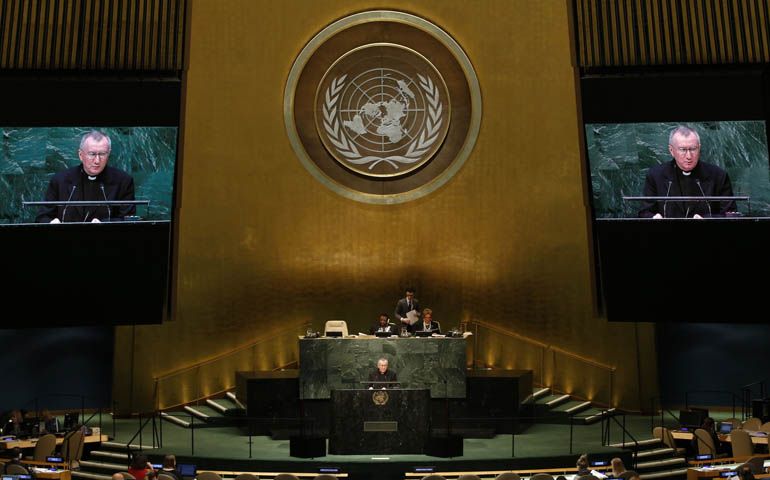 United Nations — The United Nations' framework provides the "only viable way" of dealing with the global nature of modern terrorism "which knows no borders," the Vatican's secretary of state told the U.N. General Assembly on Monday.

"This reality requires a renewed United Nations that undertakes to foster and preserve peace," said Cardinal Pietro Parolin, emphasizing that recent terrorist activity is "criminal behavior that is not envisaged by the juridical configuration of the United Nations charter."

He stressed that this policing role should be taken up by the U.N. Security Council since there is no "juridical norm which justifies unilateral policing actions beyond one's own borders."

New forms of terrorism engage in military actions on a vast scale and are "not able to be contained by any one state," the cardinal said in his address.

He said terrorist activities in northern Iraq and in some parts of Syria are part of a "new phenomenon" threatening all states by "vowing to dissolve them and replace them with a pseudo-religious world government."

Their actions, he said, should "compel the international community to promote a unified response," which should address the "cultural and political origins of contemporary challenges" and consider the "effectiveness of international law today." particularly how it is used by the U.N. to prevent war, stop aggressors, protect populations and help victims.

Parolin noted that after the 9/11 terrorist attacks, many people oversimplified what happened by blaming the attack on a "clash of civilizations," which he said ignored the "long-standing and profound experiences of good relations between cultures, ethnic groups and religions."

He also said the "attempts to find so-called legal remedies to counter and prevent the surge of this new form of terrorism" have not always "respected the established order or particular cultural circumstances of peoples who often found themselves unwillingly at the center of this new form of global conflict."

"These mistakes, and the fact that they were at least tacitly approved, should lead us to a serious and profound examination of conscience," the cardinal said, adding that the challenges posed by new forms of terrorism "should not make us succumb to exaggerated views and cultural extrapolations" but instead should "spur a renewed call for religious and intercultural dialogue and for new developments in international law, to promote just and courageous peace initiatives."

He said the U.N. include must promote dialogue and understanding among cultures and remember that it is not the role of international organizations or states "to invent culture, nor is it possible to do so."

Instead, the cardinal stressed that international organizations and states must promote and support "in a decisive way, and with the necessary financial means, those initiatives and movements which promote dialogue and understanding among cultures, religions and peoples."

"Peace, after all, is not the fruit of a balance of powers, but rather the result of justice at every level, and most importantly, the shared responsibility of individuals, civil institutions and governments," he said, adding that this means "understanding one other and valuing the other's culture and circumstances. It also entails having concern for each other by sharing spiritual and cultural patrimonies and offering opportunities for human enrichment."

In an effort to further assess the current situation in the Middle East, the Vatican called its diplomats from the region to Rome for a special three-day summit.

Seven nuncios based in the Middle East were to meet Oct. 2-4 with Vatican officials for talks and greet Pope Francis briefly at the start of the summit.

Is terrorism a criminal act or an act of war -- and what difference does it make?