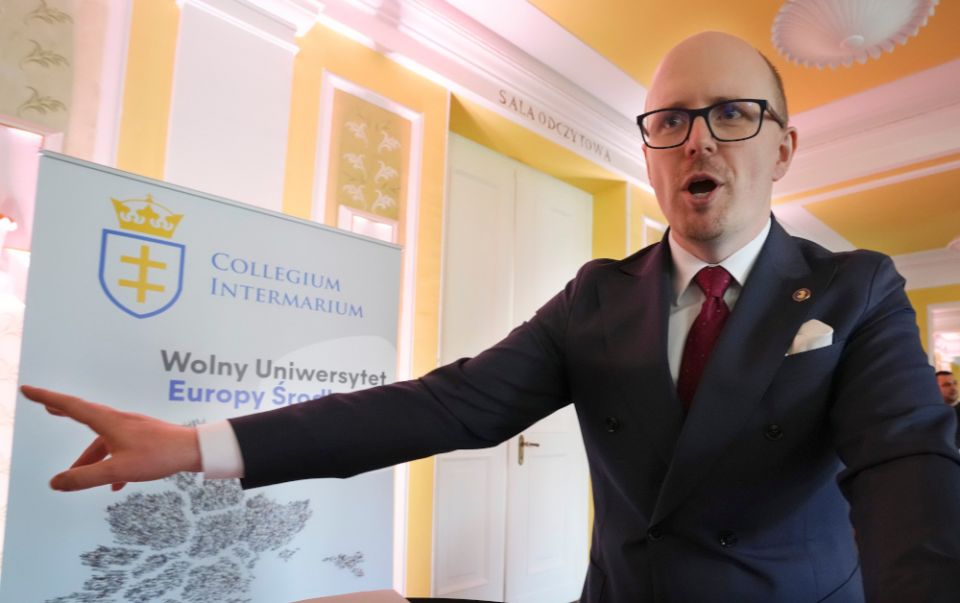 Jerzy Kwasniewski, the head of the conservative institute Ordo Iuris, attends a conference inaugurating a new conservative university which aims to educate a new generation of lawyers in central Europe, in Warsaw, Poland, on Friday May 28, 2021. (AP Photo/Czarek Sokolowski)

Warsaw, Poland — An increasingly influential Polish Catholic legal institute on Friday inaugurated a university in Warsaw that aims to educate a new generation of conservative lawyers in central Europe who it hopes will also shape wider European culture.

The institute, Ordo Iuris, works to promote conservative causes, including restrictions on abortion and opposition to same-sex legal unions as its seeks to support traditional family structures. It successfully lobbied for the recent restriction of abortion rights in Poland and is also urging countries not to ratify the Istanbul Convention, an international treaty against domestic violence, due to objections over how the treaty depicts gender relations in the family.

Jerzy Kwasniewski, a Warsaw lawyer who heads Ordo Iuris, said that the university, Collegium Intermarium, is meant to be a space of free academic inquiry at a time of censorship in traditional academic settings that overwhelmingly targets and silences conservative thinkers.

Kwasniewski also described the college as a counterweight to existing institutions, including the Central European University, which was founded by the liberal Hungarian-American investor George Soros and which recently relocated from Budapest to Vienna under pressure from Hungary’s nationalist conservative government.

“We all hope that Collegium Intermarium will bring change to the academic sphere of central Europe,” he said.

Intermarium (Latin for “between the seas”) is a historical term that refers to a swath of central Europe between the Baltic, Black and Adriatic seas. It’s a region of ex-communist countries that are largely more conservative than in Western Europe and where conservative and nationalist parties have seen their support grow in recent years.

The name points to a larger ambition, with Kwasniewski saying he also hopes the institution will allow conservatives from central Europe to one day shape the larger — often more secular culture — dominant elsewhere in the European Union.

“We don't follow the French way of a division between church and state. We rather follow the more American way of an alliance of the spiritual with the republic,” Kwasniewski told The Associated Press on the sidelines of the conference. “We are not able to to follow the motto of the European Union, ‘United in diversity,’ without acknowledging the diversity of different cultural spheres of Europe.”

The Polish culture and education ministers praised the university as a place that will nurture Europe's traditional Christian traditions, while a letter was read out from Prime Minister Mateusz Morawiecki, underscoring the conservative government's support for the new institution. Representatives of the Hungarian government also voiced their support.

Ordo Iuris is widely viewed with suspicion by LGBT and women's rights groups, which accuse the Catholic group of being part of an international network seeking to erode the rights they have gained in recent decades.

Ordo Iuris successfully backed a successful effort to restrict abortion rights in Poland. It provided legal arguments to the constitutional court, which ruled last year that abortions in cases of fetal abnormalities are not constitutional. The result is that Polish women are now required to carry very sick or even unviable fetuses to term — a ruling that in practice drives more women to have abortions abroad. The ruling sparked weeks of mass protests in the country, which already had one of Europe's most restrictive abortion laws.

The institute has worked across the region, for instance assisting a Romanian group that successfully lobbied to block the legalization of same-sex unions.

Neil Datta, the head of the Brussels-based European Parliamentary Forum on Sexual and Reproductive Rights who has extensively researched Ordo Iuris, says he believes the university will become a center for training “a new cadre of elites that basically can transform and whitewash far-right thinking so it appears professional and acceptable in a certain political discourse.”

He said the plan reminds him of what happened in the United States, where the Christian right years ago began funding universities which over time produced new elites with influence at think tanks and in politics.

“This is a first step in the same thing,” Datta said.

Ordo Iuris members say the group is unfairly portrayed by activists and the media.

Kwasniewski told the AP that the group is not against women, arguing that the institute includes many women and that its anti-abortion position is a human rights position.

“Abortion is not about women's rights. Abortion is also performed on girls in the prenatal stage of development. It's just about the violation of the right to life,” he said.

The university will offer accredited degrees at the master's level in law, with the curriculum to include related subjects like the history of law and philosophy. It plans to offer a PhD program in four to five years. It will be privately funded at first but plans to seek public funding in the future, Kwasniewski said.