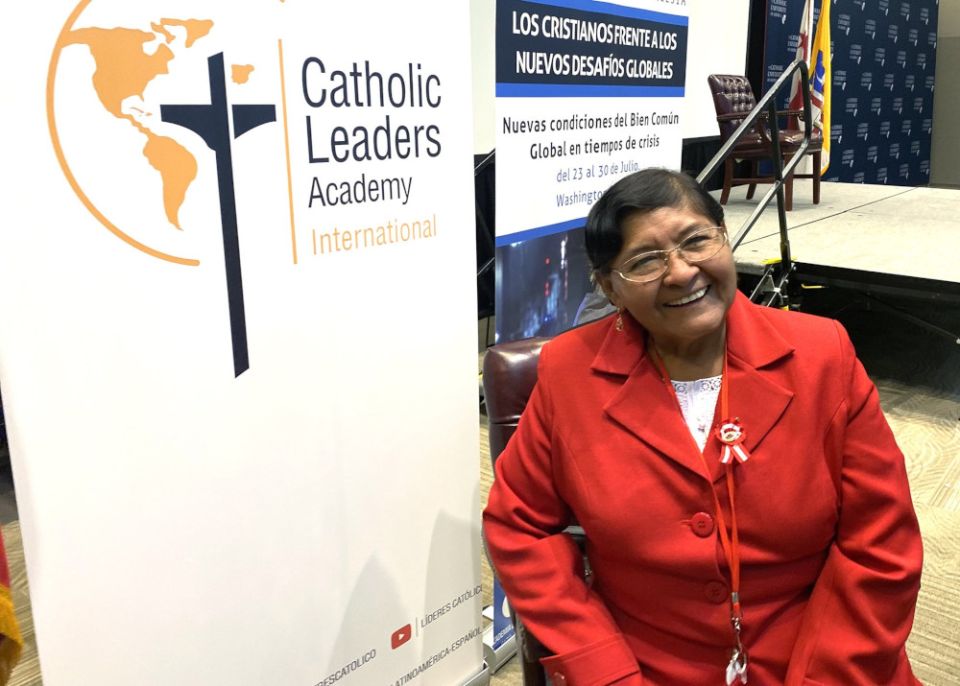 Magdalena Santa María, a sociologist from Peru, poses for a photo July 28, 2022, during a break at the Catholic Leaders Academy at The Catholic University of America in Washington. The academy is part of an international project that works in collaboration with the bishops of the Latin American countries to help with the formation of leaders, mixing social, political and economic fields with Christian values. (CNS photo/Rhina Guidos)

Washington — With news of the economy dominating news cycles in the U.S., few in the country have paid attention to the unrest taking place throughout Latin America.

News of major protests over the rising cost of basic necessities in Ecuador, where Indigenous men and women blocked access to oil wells in June, costing the country $1 billion, for example, was hardly noticed in the U.S. even as that global commodity continues to inflict major economic pain around the world.

Yet in Washington, a group of about 100 Catholic men and women -- directors of Catholic organizations, lay ministers, women religious and bishops -- gathered in late July to define their role and that of their local churches in Latin America as their respective countries transition into a post-pandemic period.

"We have looked in-depth at the challenges toward a global common good after the pandemic," José Antonio Rosas, of the Catholic Leaders Academy, told Catholic News Service July 28 about the gathering at The Catholic University of America July 23-30.

Those challenges are political, social and economic in nature, but they are ones that extend the distance of the Catholic Church in the U.S. to Latin American, inextricably tied, not just by faith, but also history and people.

That's why it was important to have church leaders from each region -- Cardinal Carlos Aguiar Retes of Mexico City and Cardinal Wilton D. Gregory of Washington -- address the group, according to Rosas.

"It's the change of an epoch, an age, from the view of an Anglo-Saxon church and the view of the church in Latin America," he said.

The participants, from 12 countries, engaged in topics dealing with economic growth, inequality, social justice, the rise and danger of populism, democracy, as well as institutional crises in the Americas, Rosas said.

The academy, which organizes the weeklong seminar, is an international initiative that works with the bishops of the Catholic Church of Latin America to help instruct leaders in the social doctrine of the church with social, political and economic topics seen through a Christian lens.

In groups and via individual camaraderie, participants were able to discuss challenges in their respective countries, which tend to be part of the general landscape of Latin America but occur in each in different degrees.

"There is a crisis in each different (Latin American) country because the political, economic and social organization model of the continent has not resolved the most serious generational problems, problems such as inequality and poverty, pension systems, meaning people who cannot retire or if they can (what they are paid) will not allow them to survive, with health systems, where thousands of people who cannot be treated," said Rosas.

"These problems have generated a shock wave of social crises in Latin America where people are demanding that the model ... change and transform," he said. "And in this context in Latin America is where we, as Catholics, are called to lead, direct, give meaning to the processes of social transformation."

Tackling some of those problems means understanding political stances such as populism, which has affected several countries in Latin America as well as the U.S.

"Populism is the negation of dialogue," of pointing out another's errors, of portraying oneself as the only way forward, panelist Enrique Segura, an Argentine entrepreneur with an economics background, told the group July 28.

He encouraged the group to return home "as instruments of change."

Education, he said, is what combats a lot of a society's ills, and he encouraged the Catholic leaders not just to become more informed, but also to share that with others, to become prophets and point out the truth.

Sociologist Magdalena Santa María, from Peru, said she looked forward to using the information to train other women in her community in Lambayeque, north of the capital of Lima, to become more engaged politically and socially. It's a challenge, she had expressed earlier, because many have sown the idea that Catholics should not get involved politically.

But the weeklong seminar, which involved a range of speakers from various political, economic and social perspectives, helps in the discernment process, to dig deep inside oneself, she said, confront realities and be protagonists of change from a grassroots level, she said.

"We're not just numbers," she said. "Social organizations (groups) born from the base strengthen the rest."