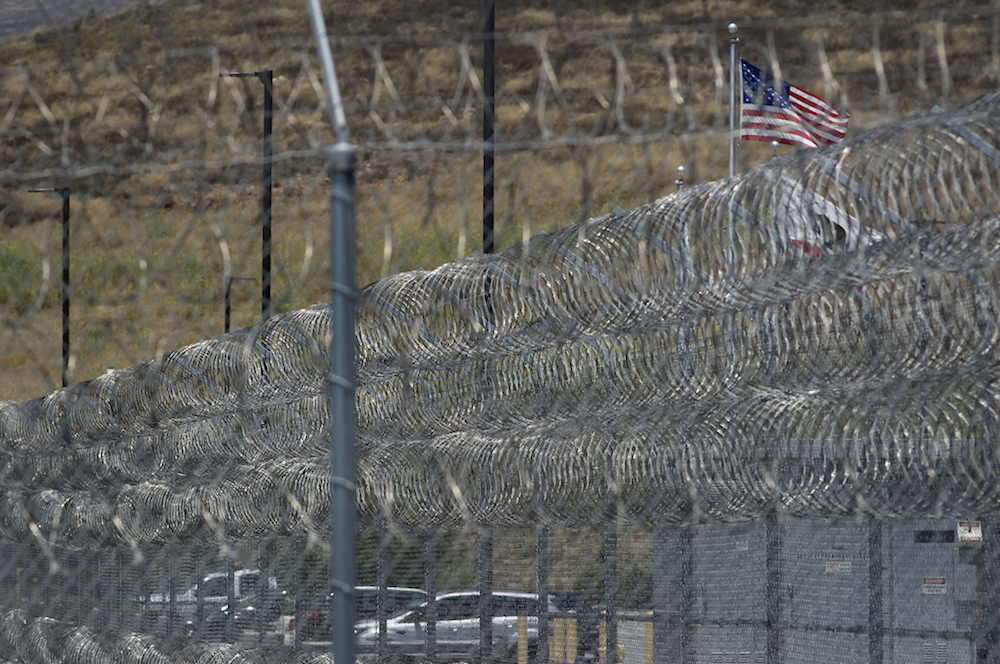 The Otay Mesa Detention Center in San Diego is owned and operated CoreCivic, formerly Corrections Corporation of America, one of the two largest private detention operators in the U.S. and largest in the world. Bishop Steven Biegler of Cheyenne, Wyoming, opposes CoreCivic's proposed immigrant detention center in his state. (CNS/David Maung)

Calling detention centers for undocumented immigrants "a far cry from loving solidarity," Bishop Steven Biegler of Cheyenne, Wyoming, has publicly opposed the expansion of a planned for-profit center in his state.

"Jesus Christ commanded us to imitate his love; thus, he calls us to protect the rights of refugees, to promote the reunification of families and to honor the inherent dignity of all migrants, whatever their status," Biegler wrote in a Nov. 18 statement published in the Uinta County Herald.

The planned Immigration and Customs Enforcement (ICE) detention center in Evanston, Wyoming, a city of 12,000 near the Utah border, was originally expected to house 500 undocumented immigrants as they await court proceedings in Salt Lake City, about a 90-minute drive away. But the proposal now calls for up to 1,000 beds.

Such a facility "divides us from our migrant brothers and sisters and separates families, and it allows for a system in which for-profit prison companies and their stockholders and business partners make a great deal of money on the misery of human persons," Biegler said in the statement.

Only one resident spoke in favor of the center at the meeting, and the proposal has faced local opposition, as the Uinta County Herald has reported.

Immigration detention centers are often located in states where detainees are unable to access legal assistance, communicate with their families and receive any meaningful support, the bishop's statement said, noting that "certainly, appropriate legal representation is not readily available in Evanston." 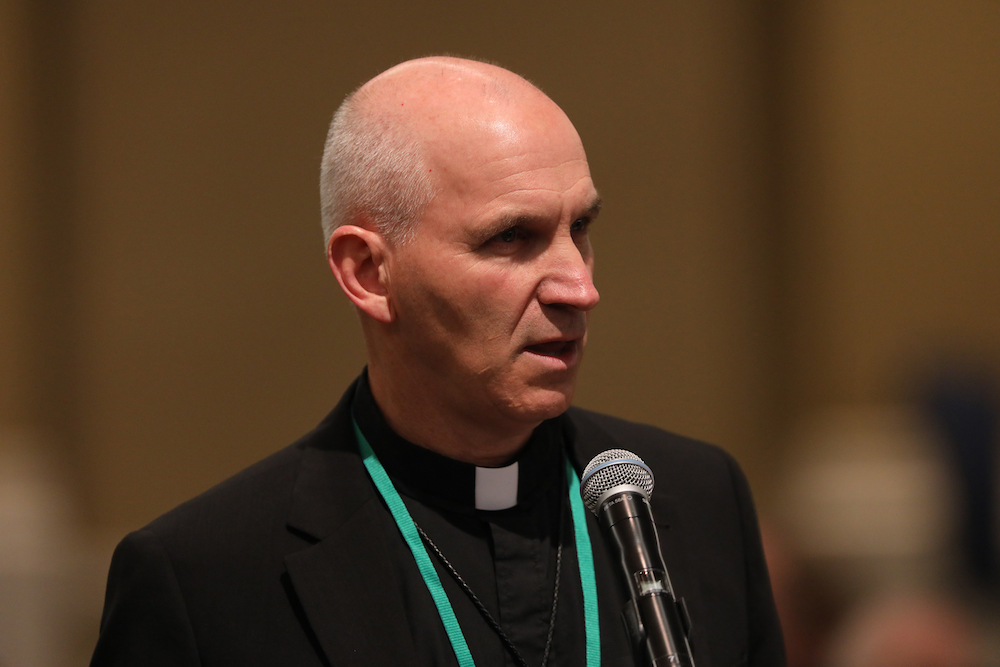 Bishop Steven Biegler of Cheyenne, Wyoming, pictured at the spring general assembly of the U.S. Conference of Catholic Bishops in Baltimore June 11, has issued a statement opposing the expansion of an immigrant detention center planned for Evanston, Wyoming. The center was originally to hold 500 detainees but now has been expanded to house up to 1,000. (CNS/Bob Roller)

Biegler said the Catholic Church does "accept the legitimate role of the U.S. government to ensure public safety and to detain those individuals who are a threat to our communities," but added that "current immigrant detention policies, however, are costly, inhumane and destructive to families."

The county commission re-voted on the detention center because the previous company, Management and Training Corporation (MTC), withdrew and was replaced by CoreCivic. Both are for-profit companies. CoreCivic is the world’s largest private prison corporation.

The bishop's statement expressed concern about for-profit prison companies, noting they "often prey upon vulnerable communities where jobs are needed." The centers also have a history of cost-cutting, poorly-run facilities and abuse, the statement said.

"The Catholic Church also is troubled by any institution that seeks to capitalize on human suffering, and it views immigrant detention centers from the perspective of our biblical tradition, which calls us to act with justice toward persons on the margins of society, including strangers and imprisoned persons," the bishop wrote.

In an earlier statement against the proposed detention center, Biegler said just treatment for migrants is a life issue.

"Just as we seek to protect the lives of innocent unborn children, so must we treat asylum seekers and migrants as human beings created in the image and likeness of God," he wrote in August. "If we do not, then we are eroding the respect for all human life. Then we are being anti-life."

That August statement also called "inhumane' the practice of separating migrant children from their parents. A number of individual bishops — especially those with dioceses on or near the southern border — spoke out against family separation in 2018 after the Trump administration issued its "zero tolerance" policy for undocumented migrants who cross the border, even those legally applying for asylum.

The U.S. Conference of Catholic Bishops has issued several statements in support of immigrants or condemning draconian policies against them. Several bishops, clergy, religious women and lay people have made trips to the border to support immigrants detained there. Six bishops also made a pastoral visit to the border this past September.

In 2015, the bishops' conference and Center for Migration Studies issued a scathing report about the growth of the detention center system over the past two decades and the rise of involvement of private prison companies.

In May 2019, Seattle Auxiliary Bishop Eusebio Elizondo presided at a Mass outside the Northwest Detention Center in Tacoma, Washington, one of the largest immigration detention centers in the country, with a capacity of 1,575 people, to show solidarity with those detained inside the center.

An interreligious group in Chicago that includes Catholics has been fasting and praying for those detained, especially children who have died while in custody or after becoming ill while in custody.

In October, Bishop Mark Seitz of El Paso, Texas, released a pastoral letter on racism that mentioned the rise of prison camps at the border.

In his most recent statement, Biegler urged Wyoming Catholics not to remain silent. "Everyone has a duty to weigh in on civic issues so as to promote the common good," he wrote. "It is a concrete way of loving our neighbor."