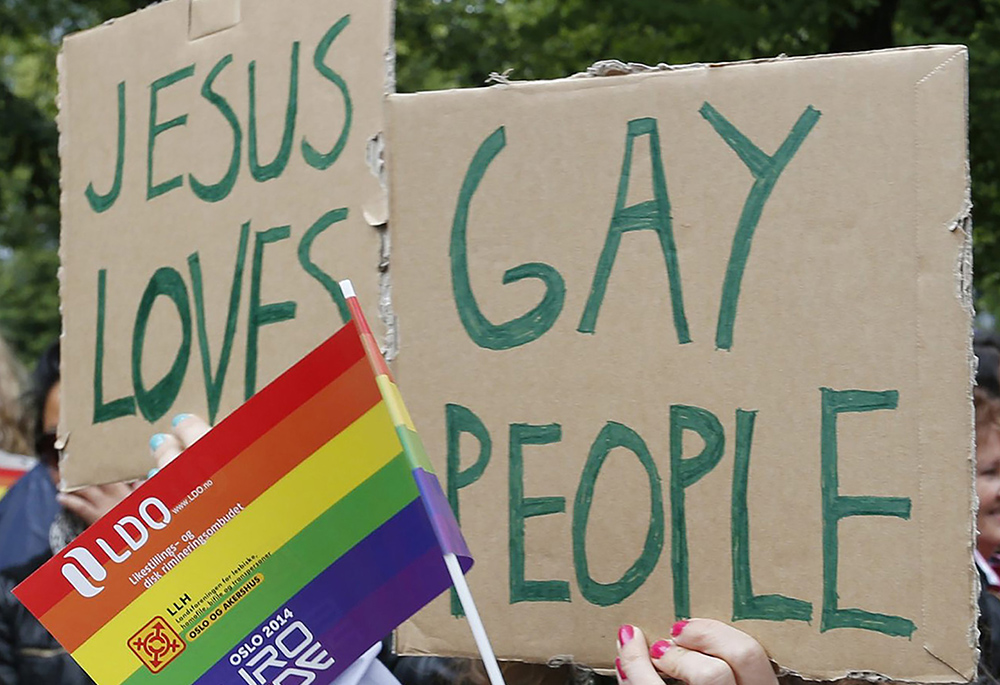 People hold a rainbow flag and signs during a 2014 gay pride parade in Oslo, Norway. In Zambia, some LGBTQ+ Catholics said a church campaign against homosexuality has made them feel unsafe. (CNS/Terje Bendiksby, NTB Scanpix via Reuters)

In stark contrast to the pastoral leadership shown by Pope Francis when it comes to the care of LGBTQ+ people, the archbishop of Lusaka, Zambia, in southern Africa, recently ramped up anti-LGBTQ+ sentiment. Archbishop Alick Banda, in a statement, said that LGBTQ+ people are contrary to Zambian culture and Christian values.

His statement was later supported by the Zambia Conference of Catholic Bishops.

The position of the Zambian church is especially provocative in a country and culture that still criminalizes LGBTQ+ persons. In Zambia homosexuality is covered by sodomy laws, which also proscribe bestiality. As a result, LGBTQ+ persons live in fear in Zambia and are often subject to human rights violations.

Societal attitudes towards LGBTQ+ people are still negative. For many Zambians, homosexuality is considered immoral and often thought to be a form of insanity. Many are concerned that the archbishop's statement further entrenches prejudice against the LGBTQ+ community.

Banda cited an alleged increase in the rape of young boys and men while also noting "the proliferation of LGBTQ+ and other vices which are averse and seem to be on the increase corroding the fabric of our society." He called for action against these tendencies.

The statement, released in late September and entitled "A Call to Action against Offensive Tendencies," was accompanied by a cover letter requesting that all the priests in the archdiocese read it at public masses after the announcements.

More than once in the statement, the archbishop claimed that "we have witnessed" increased incidents and events that "promote LGBTG+ tendencies contrary to the Laws of Zambia and our Zambian culture."

Banda began his statement by saying that he wanted to address "a thorny issue" that slowly seems to be taking root "in our society." He claimed that "several cases of sodomy and homosexuality [are] on the increase in our society much to the displeasure and disapproval of the general public."

He said that law enforcement agents and the president, who took an oath to protect the Constitution, seem to be "paying a blind eye."

The previous archbishop of Lusaka, Telesphore George Mpundu (who resigned in 2018), favored the current ruling party, the United Party for National Development. Banda supports the previous ruling party, the Patriotic Front. Insiders, who do not want to be named for fear of reprisal as they work in the archdiocese, said there is tension between the two bishops. They also said that Banda appears to be trying to settle political scores and gain support against the ruling party by scapegoating the LGBTQ+ community.

Banda's statement is also a critique of the current ruling party, which seems more lenient in its inaction in applying anti-homosexual legislation in the country.

In his statement Banda added his other grievances with the government, including the "abuse of authority, abuse of state institutions, arbitrary disrespect of the rule of law, the hounding of the opposition members and constitutional office bearers perceived not to toll the line, the rise of nepotism, hybrid hypocrisy, deception, and lies, etc."

The government is also critiqued by some Zambians who claim that the country's heritage needs to be protected. They accuse the government of "impressing the international community at the expense of Zambians and our country."

The current government has, however, also not done anything to change criminalizing LGBTQ+ people.

In a press release, the vicar general, Fr. Solomon Tembo, said that the clergy "disassociate ourselves from all sentiments and views expressed in the article circulating."

According to Banda, the Swedish and Finnish embassies in Lusaka disregarded the provisions of Article 20 of the Vienna Convention when they flew gay pride flags outside their embassies in the Zambian capital.

He also referenced a company called "PR Girl Media Limited,'' which hosted an event called "Lusaka July 2022" at the Lusaka Polo Club. He said that "pictures and videos that emerged from this event showed attendants double dressing in attires of the opposite sex and appearing to promote LGBTQ+ behaviour."

Days after Banda released his letter, the Human Rights Commission of Zambia also released a statement saying numerous stakeholders had approached them "expressing fear about the safety of suspected or real members of the Lesbian, Gay, Bi-sexual, Transgender, Queer and Intersex (LGBTQI) community in Zambia."

The commission warned that the lives of LGBTQI people should not be "sacrificed at the altar for political, religious or cultural expedience because life is sacrosanct and must be protected."

They also said that the state "must, therefore, not spare any effort to stop the emerging vicious hate campaign against the LGBTQI community."

The commission said that the expression of fear came from public statements made against perceived or real LGBTQI individuals. It went on to say that there are complaints and fear of potential human rights violations and abuse against actual or suspected LGBTQI individuals.

The commission also noted the tendency of "some stakeholders'' to deliberately confuse criminal acts with human rights issues for LGBTQI people. It said that human rights accrue by virtue of being human and that LGBTQI people should be free to exercise their sexual orientation and gender identity.

The Zambian bishops' conference statement, titled "Position of the Zambia Conference of Catholic Bishops on Homosexuality in Zambia," said that the bishops reiterate and reaffirm the Catechism of the Catholic Church on homosexuality.

The bishops said the church is "called to provide appropriate assistance and accompaniment to all her erring children, including those with homosexual tendencies, so that they may learn to do what is right before God and men."

Banda lamented that the police arrested, detained and charged a group of "concerned citizens" and journalists who undertook a peaceful protest against the LGBTQ+ community. They were trying to "to raise awareness to the ever escalating cases of homosexuality and sodomy in the country."

He said this is alarming because "if nothing is done to raise awareness among our people, LGBTQ+ will become an acceptable norm in Zambia, despite the existence of laws that criminalizes these activities and worse still being offensive to our Cultural and Christian values."

The Human Rights Commission made it clear that cases of sodomy should be investigated by the authorities and dealt with according to the law. They say that "everyone must effectively be protected from any form of sexual abuse." However, they warn that this should not be confused with or be used to clamp down on the LGBTQI community. They say that all human rights should be upheld, even for criminal suspects.

The statement from the commission went on to say that it is "cognizant of the fact that practicing homosexuality or lesbianism is illegal in Zambia and the Commission has noted the opposition against the practice based on various factors such as religious and cultural beliefs and values."

They requested that those "on the wrong side of the law or in conflict with the law" be treated in a "humane manner because they are still human beings" and entitled to the protection of their rights.

In his statement, the archbishop committed the archdiocese's Directorate of Integral Human Development to "embarking on raising awareness against these offensive trends which seem to be on the increase in our society."

He invited the faithful to "pray and fast against all these vices that seem to be accepted by the authorities that be."

The Zambian bishops' conference statement said: "The pastoral charge of the church as stated above does NOT in any way, suggest the abrogation of the laws of the land. Practicing homosexuality constitutes a criminal offence in Zambia and the law has to be respected."

A version of this story appeared in the Nov 25-Dec 8, 2022 print issue under the headline: Zambian bishops condemn LGBTQ+ community.